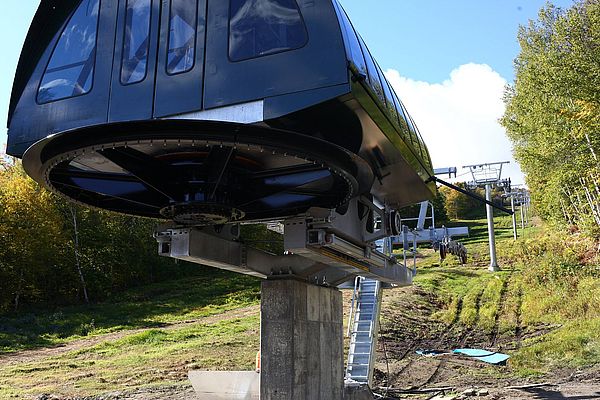 Sugarbush is replacing the Sunny Double chairlift with a fixed-grip quad chair. October 2017. 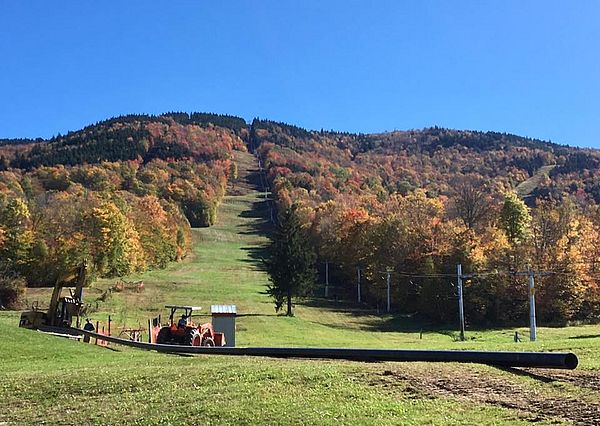 Snowmaking, lifts, grooming machines and more. Here's a look at on-mountain improvements at Vermont ski resorts for this winter.

Bolton Valley is upgrading its snowmaking system. The pumps at the Timberline pump house will be balanced, allowing for more water to be pushed uphill more quickly. The resort is also adding to its gun and hose inventory. These two upgrades will allow the resort to blow snow in multiple locations at the same time.

Burke Mountain is installing 13,400 feet of new snowmaking pipe. This will increase efficiency on the lower mountain while adding snowmaking for the first time to two new trails on the upper mountain -- Upper Doug’s Drop and McHarg’s. These new additions are a part of a larger-scale project currently underway to replace a POMA surface lift that services the Warren’s Way race training hill. A new high-speed Leitner POMA T-bar is being installed and will increase uphill capacity in that location by nearly five times.

Killington continues to replace snowmaking infrastructure, including adding low-energy tower snow guns. The resort bought three new groomers. One of the machines made by Prinoth is designed for use in terrain parks. The Snowdon Triple chairlift is undergoing significant upgrades over two years while the K-1 Express Gondola, Sunrise Village Triple and Superstar Express Quad are also getting upgraded equipment.

Magic is expanding its snowmaking system, adding two new lifts and enhancing its lodge. Magic will now have a new beginner area with a StarLift carpet conveyor lift for its learning center. A “new” Green Chair lift will serve base-area to mid-mountain intermediate and beginner terrain. (While equipment for that lift was purchased under previous ownership, it was never completed, and it’s lay dormant there for a decade.) Look for the Green Chair to open by Thanksgiving, weather permitting.

Pico Mountain is improving its snowmaking capacity by increasing water storage in two snowmaking ponds with a dredging project. In addition, key pipelines have been replaced, valve stations upgraded and pump houses augmented to improve snowmaking.

Smugglers’ Notch is replacing its ticket system with RFID cards and gates at its lifts.

Stowe is creating additional parking. A new lot will be located between the Midway Lodge and Gondola base. The resort is also expanding its parking lot at the Mt. Mansfield Cross-Country Center.

Sugarbush is replacing two of its older double lifts, the Village Double at Lincoln Peak and Sunny Double at Mt. Ellen, with new fixed-grip quads. The areas around both lifts have been regraded to be more suited for beginners. Sugarbush is purchasing new SnowLogic snow guns, replacing the motor for Mt. Ellen's North Ridge Express Quad, installing a new snowmaking pipe on the Which Way trail on Mt. Ellen, replacing an air compressor for snowmaking, and purchasing two new Pisten Bully groomers (one is designed for terrain parks). Sugarbush is also replacing its ticket system with RFID cards and gates at all base lifts.

Suicide Six is doing trail work and thinning glades. Contour and grade changes will help with snowmaking. The summit quad has new loading and unloading decks. Snowmaking improvements continue with the addition of new snow producers, as well as pipeline and infrastructure repairs.