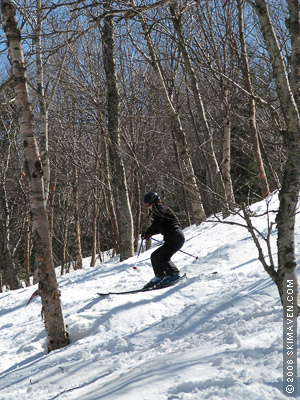 It’s inching closer to Labor Day, school time and the colors of fall — and it’s time to think about season pass discounts!

Here are important deadlines to keep in mind while you decide what Vermont ski resorts you might ski this winter, and whether a season pass is a good deal for you. (Do the math!) The earliest discount deadlines are between August 30 and Labor Day!

Some resorts are offering season pass protection this year. That is, for a modest fee, you can get some sort of refund if you get ill or hurt yourself this winter. Might be worth considering.

I’ve put these in chronological order, according to the resorts’ first deadlines for season pass deals.

Through August 30, Killington’s college season pass rate is at its best ($299). Killington doesn’t offer an early-bird discount for other season pass purchases, however, according to its Web site. Of note: The Blackout Pass offers a discounted ski pass that lets you ski through the season with the exception of 18 blackout days, when the slopes are generally packed.

Get your Burke Mountain ski pass by September 1 for the best season pass deals. Burke has a nice option this year: you can spread out the payment of your 2010 – 2011 season pass over six months. Also of note: the super-discounted Kingdom Pass is for students aged 6 – 24 who live or attend school in Caledonia, Orleans and Essex Counties of Vermont, or in Coos and Grafton Counties of New Hampshire.

At Smuggs, you get the best rates on season passes and Bash Badges when you purchase by Labor Day, September 6. The next best rates are had by Halloween. Bash Badges require an up-front fee but they give you discounted or free daily lift tickets through the season so they can be a good choice for those who ski Smuggs rather frequently. They also added a family pass that includes summer pools and water slide privileges.

Sugarbush’s best season pass deals are had before September 15. College students and 2010 grads get to procrastinate a bit longer – until November 1. They can get a season pass for $319. Parents, you’ll want to know that for every Adult 7 Pass purchased, you get a free equivalent youth pass for a dependent child under 12.

Purchase a season pass before September 20 for the best bang for your buck at Bolton Valley. BV offers a wide selection of passes for families of various sizes, as well as a five-ticket Powder Pass. I see that their full pass now includes nordic and backcountry skiing, too. An Off-Peak Pass rewards you for not skiing on certain peak days. College students can get in on the Triple Major Pass [see bottom of this list], valid at Jay Peak, Mad River and Bolton Valley.

October 11 is the day to remember for the best season pass discounts at northern Vermont’s Jay Peak Resort. The ski area gives discounts to families of at least one parent and one child. College students can score a Triple Major Pass – a season pass that is valid at Jay Peak, Mad River Glen and Bolton Valley resorts.

October 11 is the magic deadline for getting your best season pass deal at Magic Mountain in southern Vermont. Students take note of the $129 pass for college students.

Mount Snow’s best season pass deals are had before October 11. Check out the pass that has blackout days—the busiest days on the slopes. College students can get a full pass for $299.

October 11 is the winner again! Okemo skiers get the best discounts on season passes before that date. Some of Okemo’s pass are valid at Stratton, Mount Sunapee (N.H.) and Crested Butte (Colo.) Okemo pass holders are offered discounts at Jay Peak and Burke Mountain, as well. Of note: There’s a Sunday-only pass that’s designed for individuals and families that like to ski Okemo on Sundays, which are less busy than Saturdays. College students can buy a Stratton/Okemo/Mount Sunapee (N.H.) pass for $261+tax.

Get your Bromley season pass prior to October 14 for the best deals. Among their offerings are an off-peak pass and a pass for teens. College passes before that deadline will cost you $325. If you enroll your child in a season-long program like Mighty Mights, you'll also save some money before October 14.

October 15 is the early-bird-gets-the-worm deadline for season passes at Mad River Glen. For three days of skiing (any three days) check out the Mad Card or the Mad Family Card. Attention families! A free season pass is available for kids 12 and under with the purchase of a Family Mad Card or Adult Season Pass. College students should consider the Triple Major Pass (for Jay Peak, Mad River and Bolton Valley).

Halloween (October 31) is the deadline for the biggest price breaks on season passes at Stowe. College students should take note that this same deadline applies for college season passes -- whether you are a full-time student ($399) or a part-time student with six or more credits ($599).

October 31 brings the end of discounted rates on ski passes at the Snow Bowl. To consider: their midweek passes and special alumni passes for Midd alums (lucky ducks!).

According to its Web site, Pico doesn’t offer an early-bird discount for season pass purchases this summer or fall. They offer a basic line of passes.

Stratton doesn’t have early-bird deadlines listed on their site. Stratton participates in a pass that’s also valid at Okemo and Mt. Sunapee (N.H.), but buy it at Okemo because they throw in Crested Butte (Colo.) too! Interesting option: The Parent Pass is fully transferable between two parents – only one parent may use the pass at any given time. Must purchase a kid’s season pass at same time. College students can buy a Stratton/Okemo/Mount Sunapee (N.H.) pass for $261+tax.

Oh, to be a college student again. They get all the perks! The Triple Major is a full ski pass valid at Bolton Valley, Mad River Glen and Jay Peak. Get the best rate ($289) by purchasing by November 8 from any of the three resorts.

As of Septemer 1, 2010, the following Vermont ski resorts have not posted season pass rates or deadlines on their Web sites: