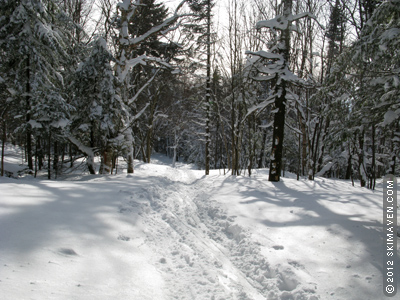 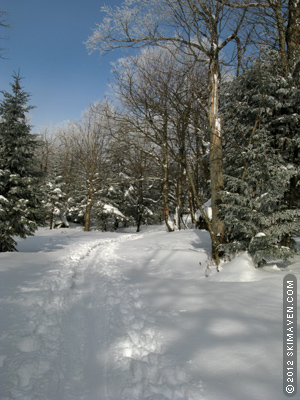 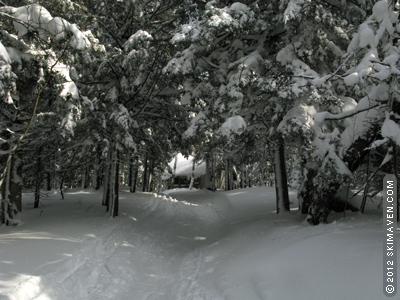 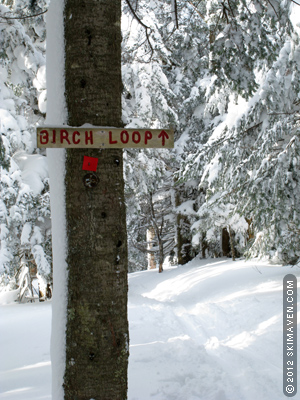 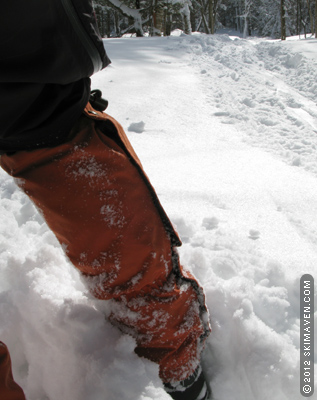 So the sun was out today and we've seen up to four feet of snow in the last several days in the mountains of northern Vermont. I just had to ski this afternoon!

We went up to the Bolton Valley backcountry trail network to earn a few turns. While it doesn't look like there's much snow to talk about when you first turn onto the Bolton Valley access road, it soon becomes clear that there's a lot of snow at higher elevations.

We had light backcountry gear and we ascended Bryant Trail to the cabin. The path was well packed from skiers who had been searching out ungroomed powder. After a break to drink water and don another layer and a helmet, we moved on to ski the Birch Loop. We had fun on the downhills, moving to the left and right to make turns in the powder.

The wind that has been pestering skiers the last few days had died down for the afternoon. It was truly wonderful to be out under the blue sky and among countless trees with snow-heavy branches.

We had our best turns while descending Gardiner's Lane. It has a couple of nice hills that let you get some speed and get first tracks.

The winter is really here folks! We're now looking at another snowstorm on Wednesday and Thursday. Yahoo!!!

On a sobering note, there have been reports of a few small avalanches off-piste in Vermont. This is due to having a hard-packed base from past freeze-and-thaw cycles. All the new snow from the last several days is on top of this slick layer. Please choose where you ski carefully!

The Catamount Trail passes through this network — in fact the highest point of the trail is in this area at 3,310 feet