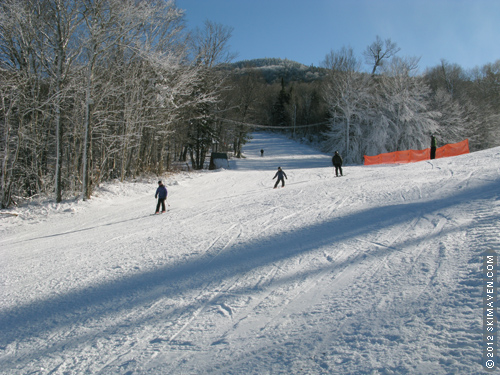 Some shots from a sunny opening day at Bolton Valley Resort. 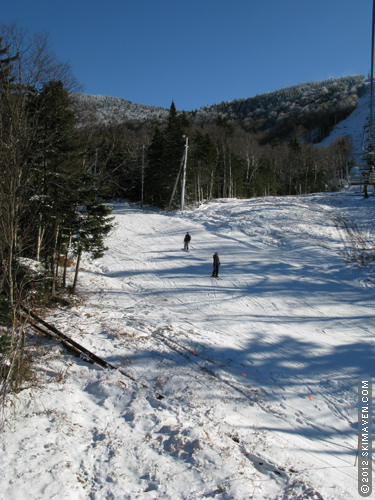 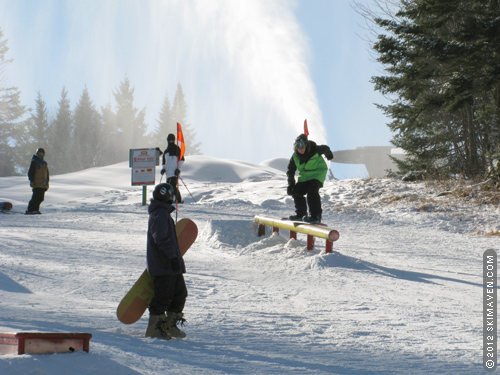 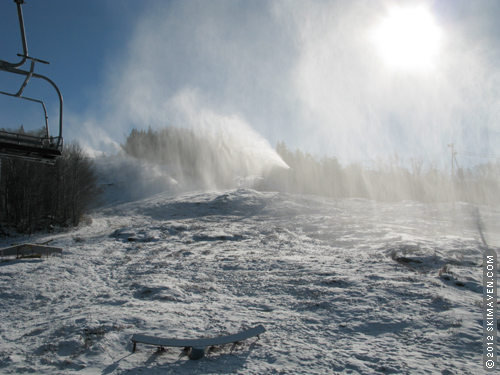 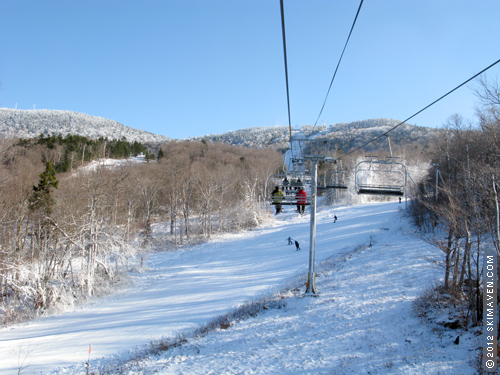 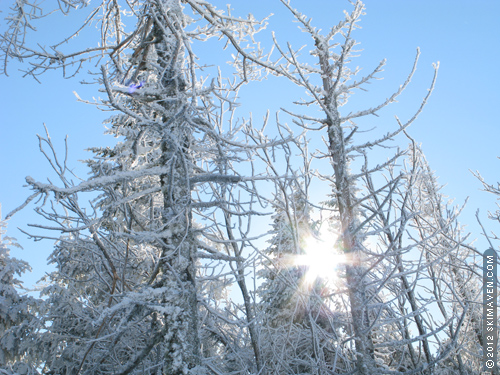 Today was a day to get out into the sunshine! Clear blue skies beckoned to me and I decided to head over to opening day at Bolton Valley Resort.

Bolton had its Vista Quad and Mid-Mountain chair serving essentially one long run from the top of the mountain. The path followed Sherman's Pass to Bear Run. At the very top you had a choice of Hard Luck Lane, Sherman's Pass or Spillway Lane to get started. Down in the base area, the Mitey Mite lift was running for beginners, as well.

The snow coverage was good. Only a few stones had been kicked up here and there, but you could see them to avoid them. I often found myself making a lot of short-radius turns on the side of the trail, where the snow was being pushed. On a couple of the shady corners, the snow was quite sugary. On the flat straight-aways, I let the skis run on the fast snow. Zoom-zoom!

The resort was making the most of today's cold temperatures to make snow in several places around the mountain. I was expecting to be chilly skiing today, but the sun warmed things up nicely. It was a beautiful day to be outside!

The local kids seemed psyched to have park features to do tricks on. The features were located on a short slope where the kids would hike up after they practiced their moves.

I was pleased to see a confectioner's sugar coating of natural snow on the trees on the mountain. I love the look of frosty trees against a blue sky. And the views to the west were lovely. It was clear so you could make out Lake Champlain quite well and had a good view of Whiteface Mountain and the Adirondacks. Nearing the top of the lift you could see a snowy Mt. Mansfield and frosty-topped Camel's Hump.

Pico Mountain also opened today and Middlebury Snow Bowl opened on Friday.  When I was driving to the mountain I noticed a misty snow cloud around Cochran's Ski Area; they were blowing snow with plans to open next weekend. I count four more ski areas that are getting ready to open soon (<link http: www.skimaven.com post tentative-opening-dates-for-2012-2013-vermont-ski-resorts _top>see dates on this post).

Looks like we have weather moving in tomorrow and lasting for a few days. Let's hope it drops a few inches of snow (I'd even accept a little sleet just as long as we get some snow) up in the hills!

Bolton Valley Resort at a glance