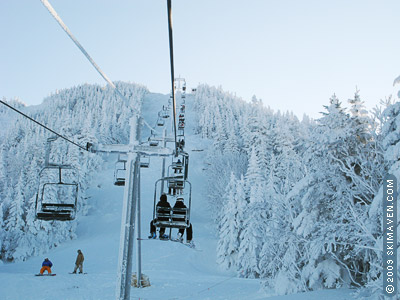 Skiing off the Madonna I chairlift at Smugglers' Notch, Vermont. 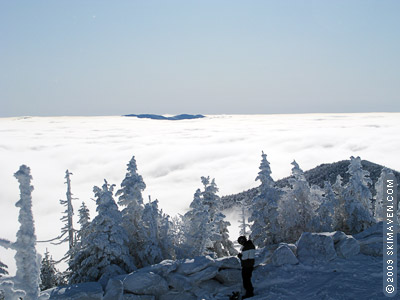 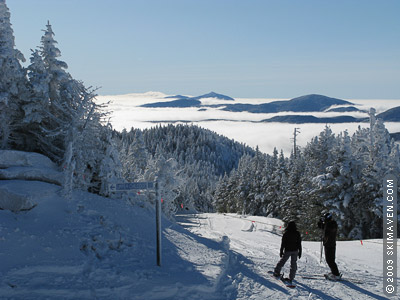 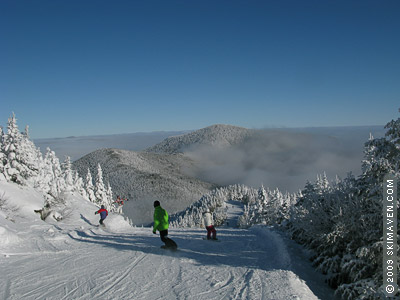 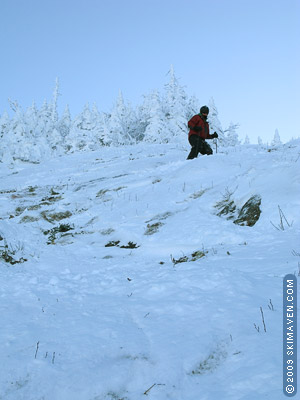 Yikes. Rocks on Freefall. The trail closed about 30 min. later.

Somehow it seems appropriate to ride the Madonna chairlift on the day before Christmas.

Smugglers' Notch was running the Madonna I chair to the top of Madonna Mountain, so the Skimeister and I skied it all morning. It was our first time hitting the upper mountain this season.

If you were down in the town or valley today, you might not have realized how gorgeous it was ABOVE the clouds in the mountains today. We were fortunate to hit the slopes on one of those rare days when the skies clear as you ascend on the chairlift. At the top, you look out at blue skies and mountain peaks poking out of a blanket of clouds.

As the morning went on, distant peaks revealed more of themselves – but they were still islands in the clouds. You could see neighboring Mt. Mansfield, of course, and Jay Peak, Mt. Hunger, Elmore Mountain, Camel's Hump and even Mt. Washington off in northern New Hampshire.

Northern and central Vermont ski resorts picked up a few inches of snow over the last couple of nights. On many trails that made for some powdery turns by the edges of the trail. I got some nice “knee shots.”

Upper FIS was that strange manmade snow that I liken to linoleum, with powder on the sides of the trail. Lower Doc Dempseys was all-natural and fun.

We took nearly every trail that was open – even Freefall. Wow, by the time we hit that it should have been closed. Rock, rock, rock. I had overheard a patroller saying it was good that morning, but he must have been among the first few when the rope dropped. We skied it at about 10:45, it was closed about 30 minutes later. Let's chalk that up to being my early-season stone grind.

On the very next run, we found some fun, powdery skiing on Lower Drifter and Red Fox Glades. We did this run a couple of times. Father Bob's was supposed to be open, but it wasn't while we were there. But by midday, we were pleased to find that they opened Dan's Ford, a neighboring natural snow trail. It provided lots of powdery turns. There was some grass showing but I think I only hit one loose rock. Good stuff.

I'm so glad we skied today.