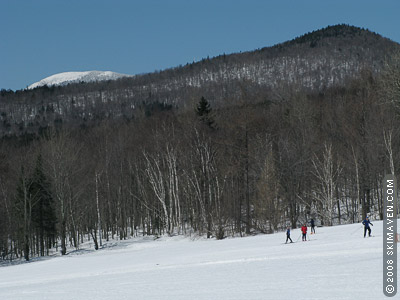 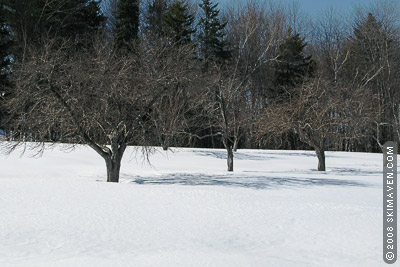 Apple trees lined up in a row at Trapp's 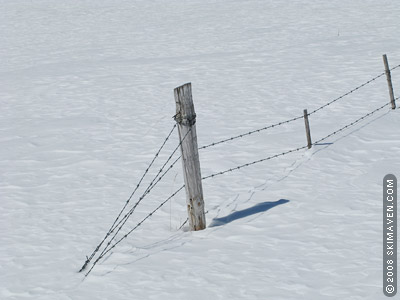 Barbed-wire fence near the nordic trails at Trapp's 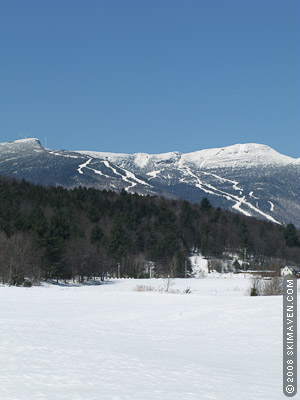 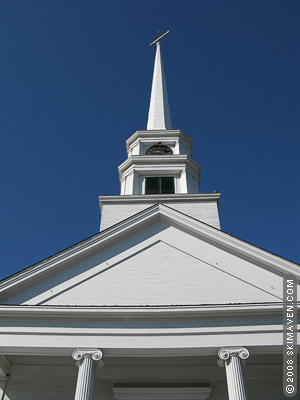 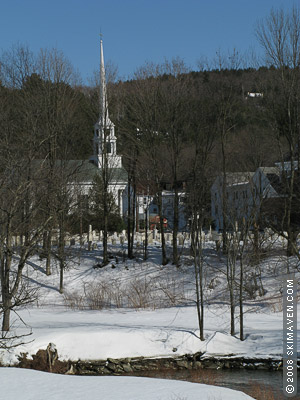 Stowe village and its community church 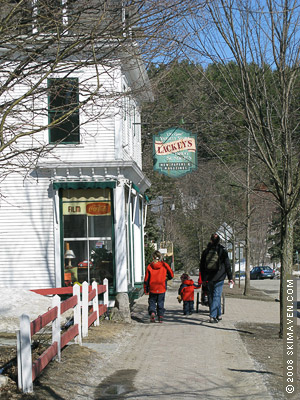 Window shopping in the village after skiing at Stowe

What a difference a day makes.

On Saturday I was bundled up against the wind and cold while backcountry skiing, and by Sunday afternoon I had no hat and only wore a midweight fleece as I cross-country skied at Trapp Family Lodge nordic center in Stowe, Vermont. It was heavenly!

Before I skied, I stopped at the Stowe Coffee House, located near the three-way stop in Stowe Village. It's tucked back behind the Stephen Huneck gallery—you know, the dog art guy. I read the Sunday paper over a small maple latté and a fresh multiberry muffin. Delicious!

As I drove up to Trapp Family Lodge, I had to stop along the way to take a photo of Mt. Mansfield, Vermont's highest peak, under a clear, blue sky. I bet they were having fun skiing in the sunshine up there!

Trapp's still has ample snow, even on its sunny meadow, which is a beginner's area and starting point for much of its trail system. I used my Catamount Trail Association discount booklet to get half-price skiing. Full price is now $20. Yikes!

I took out some waxless classic skis and headed out on Sugar Road for the Deer Pond Trail. I found the weather was delightful, but the conditions were challenging for classic skiing. I actually had my biggest wipe-out on cross-country skis this year. (Go big or go home, right?) It was due to that beautiful sunshine.

The shady spots were fast because they were still rather frozen up. Meanwhile, when I would hit the sun-soaked snow after picking up speed in the shade, I would come to a near-screeching halt. Well, one of the first times this happened I did a complete Superman-style spread-eagle wipe out. It was like I was sliding in to home base—a very wet home base. Live and learn.

For the rest of the loop when I saw a transition coming, I would put one foot out in front of the other so that I had better fore-aft balance. It did the trick, but I was ready to try my skating skis on this soft snow.

I changed boots and skis and headed down the hill toward Aither Trail. It was fun to have more ankle and ski control, so I did short-radius wedge turns in the soft, groomed snow. My destination was Aither and then Sleigh Road, both rated intermediate. They are across the road on the less-traveled eastern side of the trail system. I passed pine trees, crossed the road and a field, and then entered a fun, meandering trail where I only passed about four skiers.

This was definitely a skate skiing day. Skiing in this direction, I tested my downhill skills first (lots of wedging) before starting the climb back up and around to the lodge. I was really warm from skating—it's so aerobic. I'd stop now and then to take a swig of water and just enjoy the quiet, wooded environment around me. I noticed that a few streams were starting to rush in the warmer temperatures.

Aither and Sleigh Road are pretty except for the small junk yard that Trapp's has created at the northernmost part of the loop. There was an old Smugglers' Notch groomer with a smashed windshield, and old kitchen appliances. I skied right past them. I'm not sure what they are thinking by leaving this stuff here...

From here I made my final steep climb up to the meadow that runs behind many of the Trapp's guest houses. A steady ascent afforded me a nice view of Stowe Hollow and the Worcester Range, and it brought me around to a building that was just across the road from the nordic center. I clicked out of my skis and headed in to refill my water bottle. I cooled off by sitting in an old wooden sleigh that was parked in the practice meadow. From here I could enjoy the mountain views toward Bolton and Nebraska Notch. Very nice.

<link category trapp-family-lodge external-link-new-window external link in new>Trapp Family Lodge is a well-known cross-country center and is thus expensive and quite popular. But it's got great trails and grooming that make it worthwhile. In the past I have enjoyed skiing 5 km out on intermediate and expert trails to the Slayton Pasture Cabin, where hot soups and a warm fire await skiers.

Of course, from Trapp's you can also connect with Stowe's other fine cross-country skiing centers, such as Topnotch, Stowe Mountain Resort and Edson Hill. I haven't done this yet, but I will someday soon.

And one of the benefits of skiing in Stowe is the chance to unwind in the village afterwards. There are some quaint stores along the Mountain Road and Route 100 near Stowe's famous high-steepled church.

And if you are hungry or thirsty, I believe there are more than 40 eating establishments to choose from! I've enjoyed Gracie's, the Shed, Charlie B's, The Whip and Cactus Café in the past. But usually I just stop at the Stowe Coffee House for a quick treat and a newspaper.

I used to live in this picturesque town so I often come back to ski, hike or ride my bike. It's a lovely place to recreate!

Located on Trapp Hill Road, off of Luce Hill Road, in Stowe, Vt.
100 km of groomed and backcountry trails
2,400 acres of woodlands
5 km of snowmaking (added for this season)
Small lodge with fireplace, make-your-own cocoa and retail shop
Instruction and quality rentals available
Snowshoeing, too