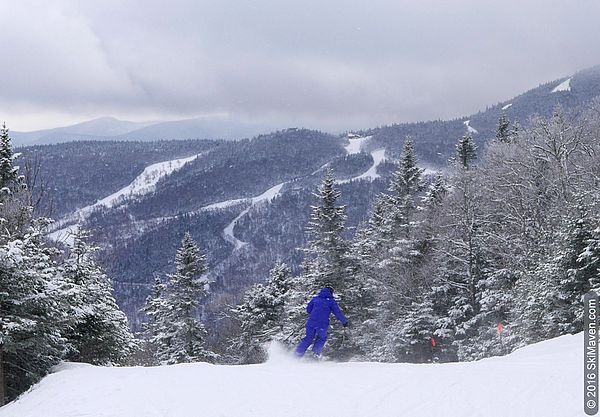 Turns with a view atop Birch Run. 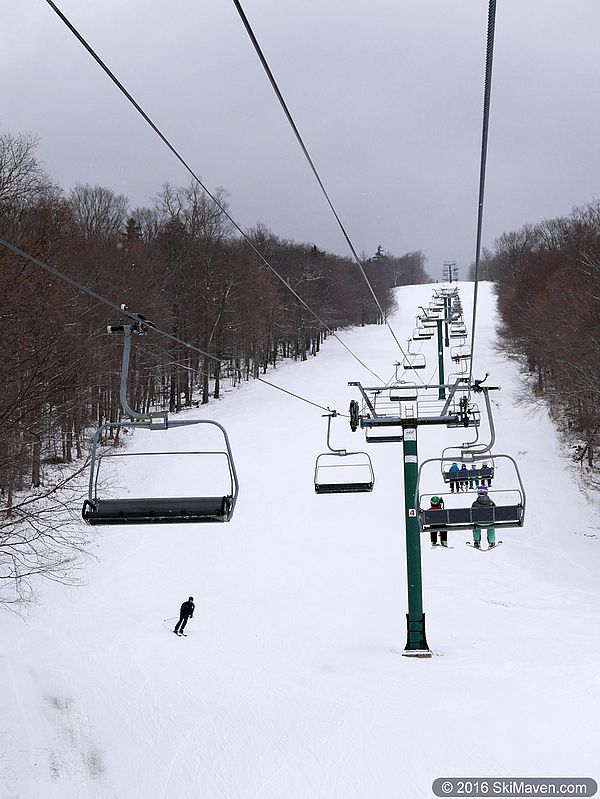 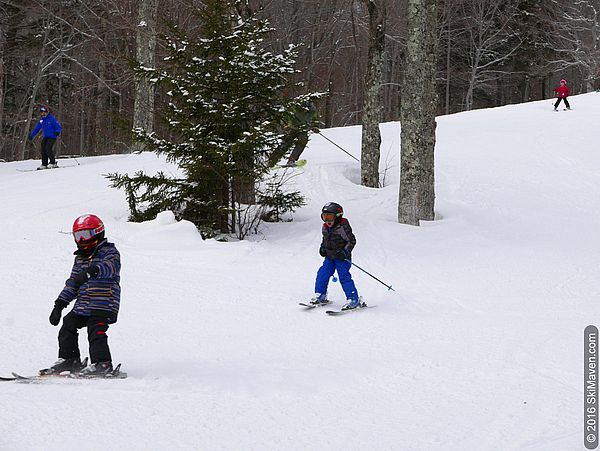 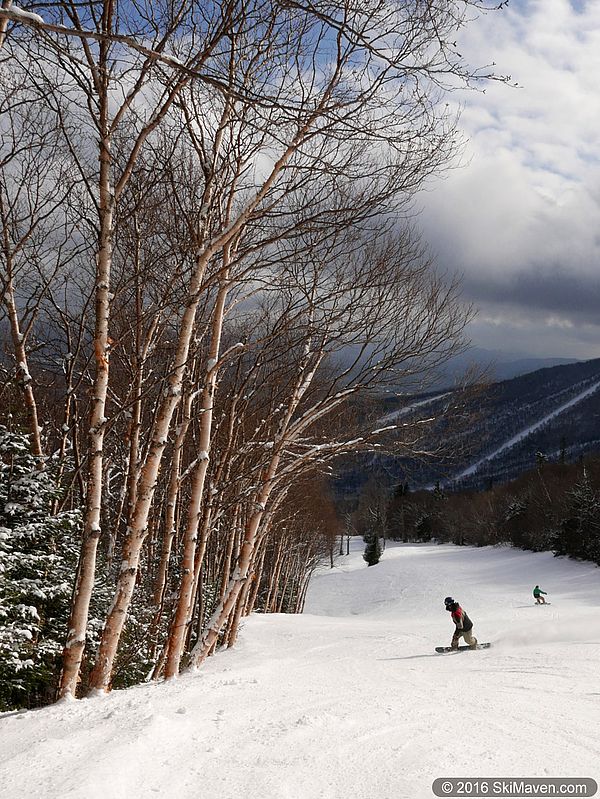 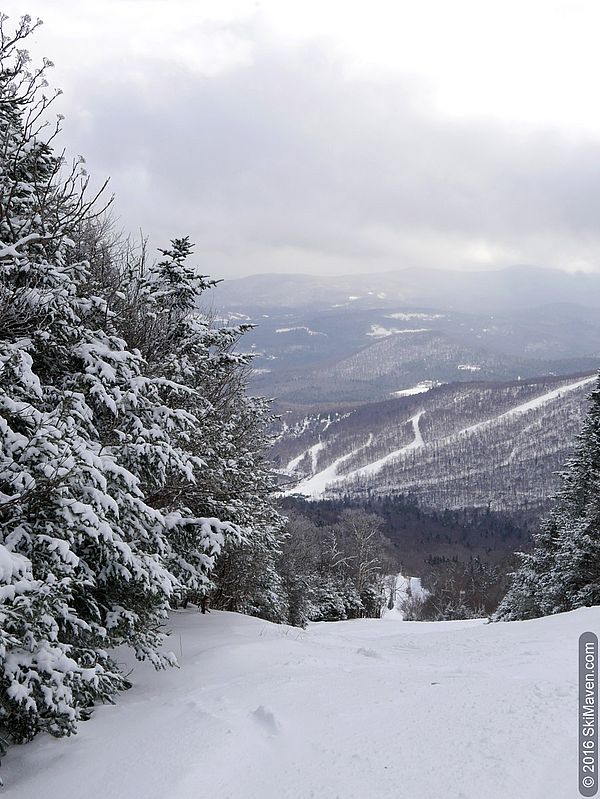 A view from the North Lynx area. 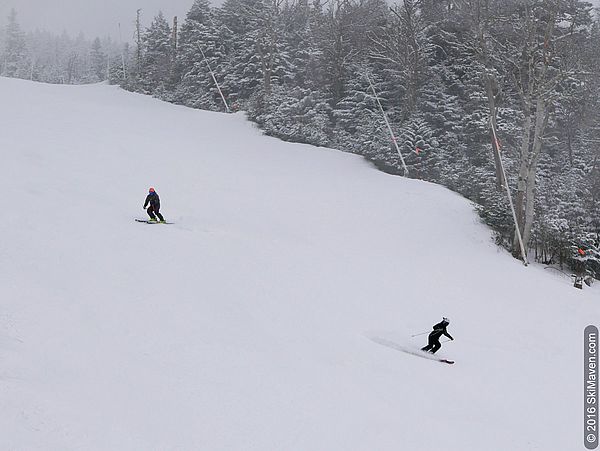 Skiing in a snow cloud on Ripcord. 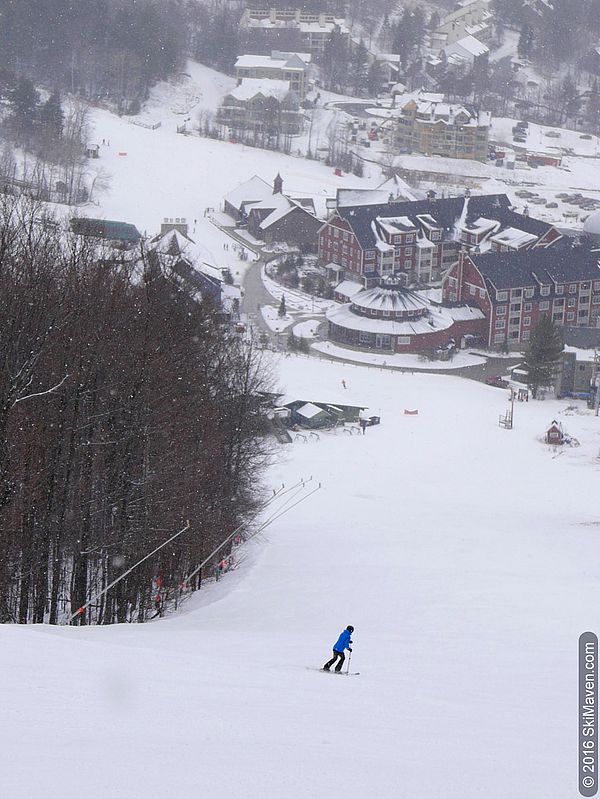 A lone skier on Spring Fling.

We’ve had a little snow in the mountains each day this week so the time was right to hit the slopes! I shook the cobwebs loose on groomers at Lincoln Peak at Sugarbush Resort.

The trees in the upper elevations were painted with fresh snow. During the afternoon I experienced snowflakes, ominous clouds hugging the peaks, and even some sunshine.

I decided to do a cruising tour of the four major lifts that were open in this part of the resort. Off the Super Bravo Express Quad and Heaven's Gate Triple (which gets you to 2,400 feet) I had the twisty Jester trail all to myself. I felt like I was skiing a Super G course on this turny, narrow trail. Downspout had challenging snowmaking whales and odd-shaped moguls on it. I made long turns on the wide Snowball and Spring Fling trails, as well.

There still isn't enough snow to ski in the woods so today it was all about hitting the groomed trails which have a snowmaking base. The recent frozen granular snow was mixed in with some of Mother Nature's finest fresh snow. It made for some fast snow, although every once in a while I found silky turns as I dipped into some untouched natural snow.

I've never really explored the northern end of Lincoln Peak so I headed for the Gate House Express Quad and then the North Lynx Triple. The North Lynx area tops out at 1,755 feet and here I really like the Birch Run trail. As luck would have it, the sun popped out and it lit up the birch trees beautifully. There are a few trees sprinkled on Birch Run and the view of the ski area and the Mad River Valley were nice from this vantage point.

The Sunrise trail has definite potential, but not today. The sign that said "Icy!" at the top was not an overstatement. Luckily I know a thing or two about edging so it was an entertaining challenge. I would make turns on the pillows of natural snow that were strewn randomly around the trail. The bottom of Sunrise had more consistent soft, natural snow. I'll hit this trail again when it's well covered.

Lower on the mountain, off the Gate House lift, I enjoyed watching local school kids in their afternoon lessons. Pushover and Slowpoke are mellow trails that attract skiers and riders who are working on their turns. The kids seem to love the Sleeper trail, and I did too. It has a few trees sprinkled on it to make things interesting. The kids — of course — skied between the trees and caught a bit of air where they could!

It was great to be cruising in the mountains this afternoon. It was just what I needed. Let's hope this recent snow trend continues and amplifies!