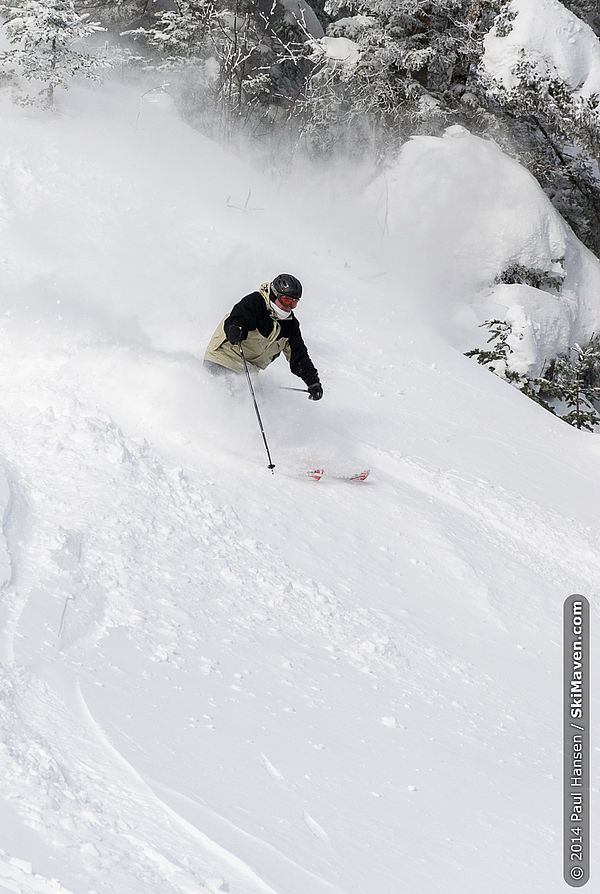 Lots of snow to play in at Sugarbush today! 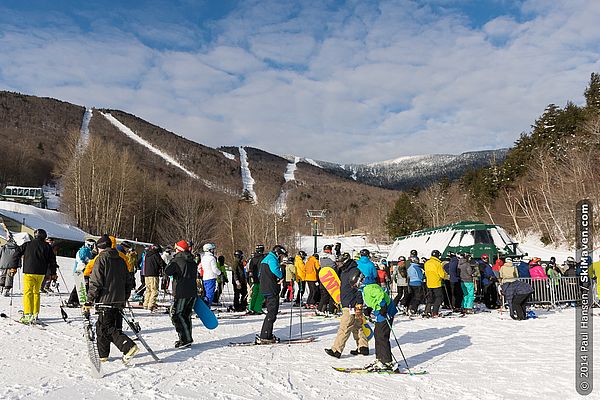 People gather for the opening of Super Bravo lift. 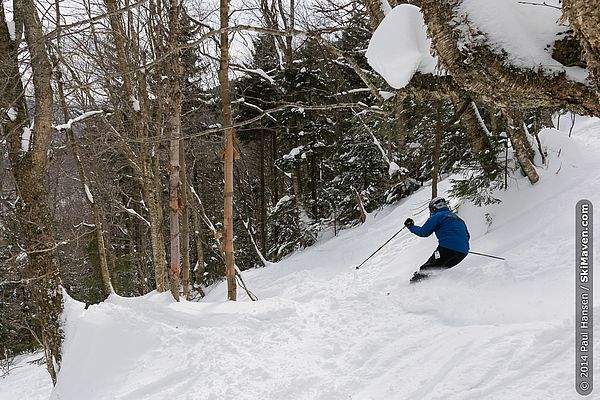 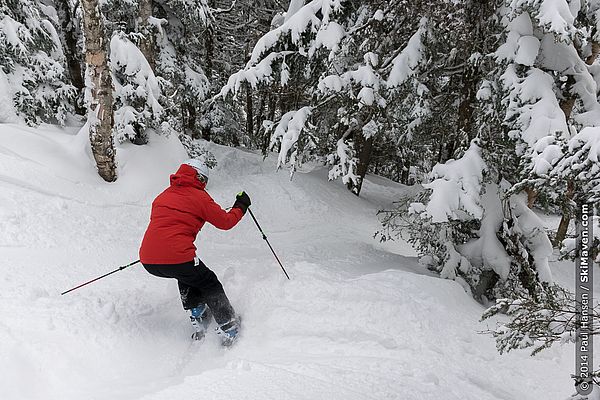 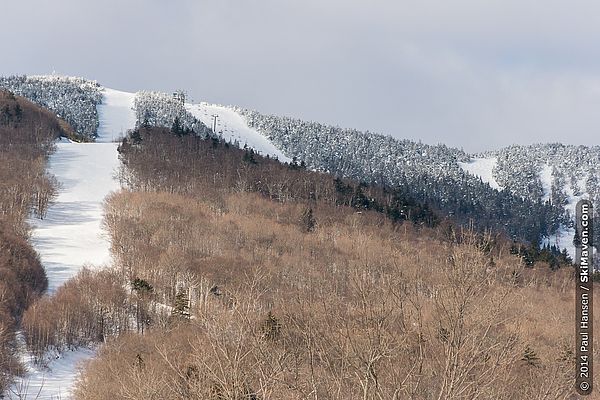 Looking up toward Heaven's Gate lift. 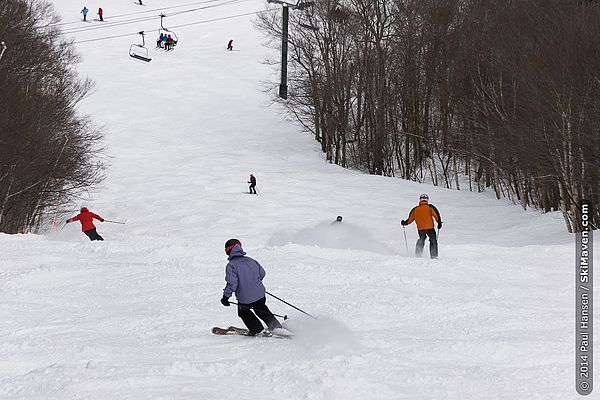 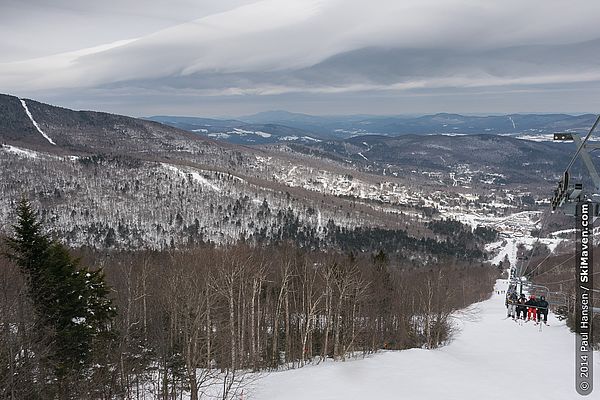 A valley view from the Super Bravo quad. 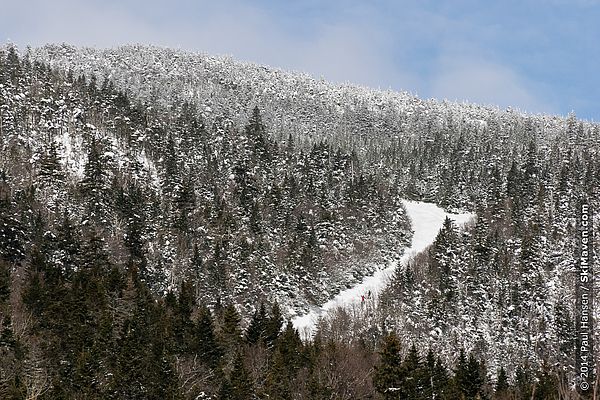 Looking over to the Middle Earth trail at Castlerock.

I'm exhausted, and I couldn't be happier about it.

Today the Skimeister and I gathered a posse of friends and went out to take on this week's new snow at Sugarbush Resort.

The day started sunny and cold. We headed to Lincoln Peak, booted up and we were in the Super Bravo lift line prior to the first chair being loaded. Heaven's Gate lift was not open on Thursday due to a lift hold, so that's where we headed for our first run. We wanted to ski some untouched terrain.

We didn't waste any time and we dove right into the powder in Paradise Woods. It was deep—about two feet of new snow! Wednesday and Thursday's snowstorm brought winds with it so getting into the woods was a great idea. Though even in the trees, there were obvious drifts from the power of the wind.

It was so much fun in Paradise Woods that we had to do it again. It’s funny that our <link http: www.skimaven.com post unbelievable-powder-skiing-today-at-sugarbush-vermont external-link-new-window from>best powder day in the East was on the Paradise trail in 2009. Seems to be a lucky spot for us!

Unfortunately, that second lift ride would be our last ride on Heaven’s Gate chair. The lift closed due to mechanical or electrical issues. Talk about bad timing.

So, off we went to wait in a 30-minute line at Castlerock chair. We figured out that the line moves so slowly because the chairs are spaced very far apart! Once up on top, we enjoyed the challenging woods off of the Middle Earth trail. The woods seemed to go on forever! Each of us got stuck in pockets of deep snow or in tree branches (or both) at one point on this run! It was a snowy adventure.

With the line still long at Castlerock, and no Heaven's Gate chair, we decided to ski off the Super Bravo high-speed quad which starts at the base of the mountain.

Our runs included Stein’s Run, a long bump run with some nice stretches of new snow once you got past the first icy pitch. I stopped a few times to give my quads a break. Oh, yeah, feel that burn!

We brought food for lunch and took a break in the Gate House Lodge before heading out to the Super Bravo lift again. The day had turned overcast (with some interesting looking clouds) and it became windy. Our skis were being blown around as we approached the top station of the Super Bravo lift and the snow was flying across the trail. At one point, I was skiing along in the same direction as the blowing snow and it made for a very cool visual effect!

We had a good run in the Lew's Line glades. It had nicely formed soft bumps in between the trees. Later we explored some woods and bushwacked through the deep snow near the Lower Jester trail.

My last run of the day was on Murphy's Glade, a mellow trail that has just a few trees sprinkled on it. The snow was soft and made for fun turns.

What a great day to play in the new snow. I'm spoiled rotten.