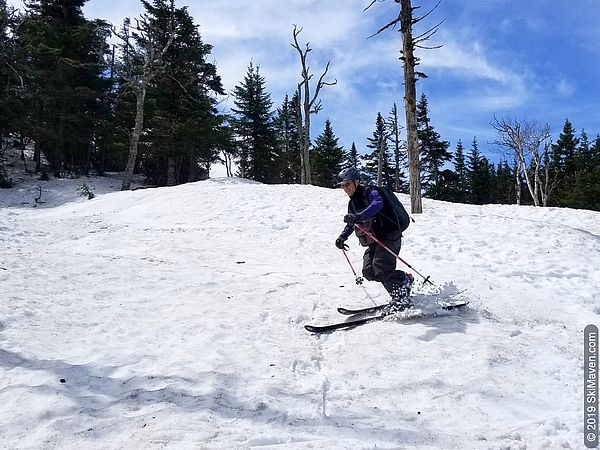 The Skimeister on some soft snow in a glade.

In addition to spending time with family and doing some yard work, we also earned some turns on Sunday. At Bolton Valley (which is no longer running its lifts) you'll still find a bunch of snow. The snowpack is quite deep in most areas! But it is April 21 so some sunny areas are melting out and logs and rocks are appearing.

It was mostly sunny as we skinned up Ricker Mountain, which is where the ski trails are located. It was wonderful to sit in the warm sun and take in the view at the top. This ski area faces west so you see the lake stretching out before you and the Adirondacks just on the other side of the lake.

Snow on the trails was rippled from melting and it was starting to soften up for the day. Some sunny spots more than others. If you skied onto snow that had been left ungroomed this winter, it was a bit challenging to turn because you sank into the soft snow. It was easier to turn on trails that had been groomed this season.

The streams and rivers are running hard now. They are quite loud!

It was a lovely, mellow day to enjoy the snow and the sun!

What Vermont Ski Areas Are Still Open in Spring 2019?

If you still want to do some lift-served skiing in Vermont, check out these Vermont ski resorts: