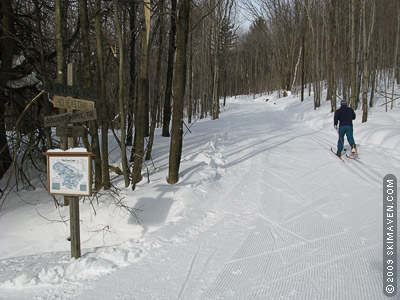 The new 40 Year Trail at the Trapp Family nordic center in Stowe. 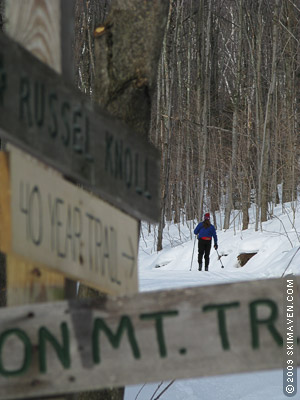 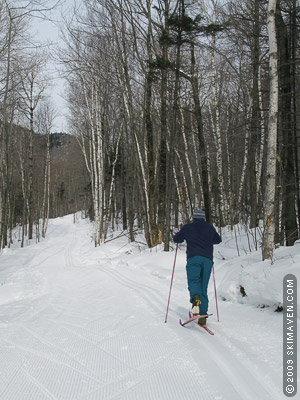 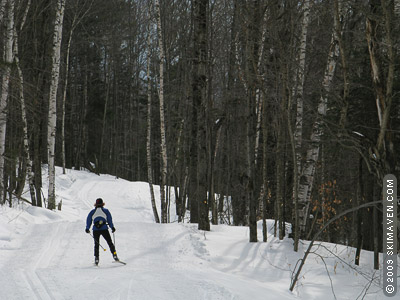 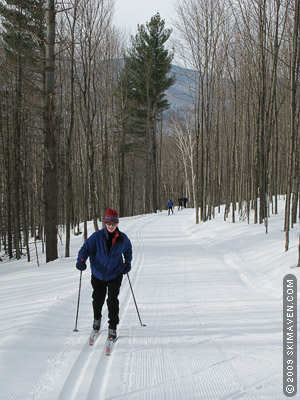 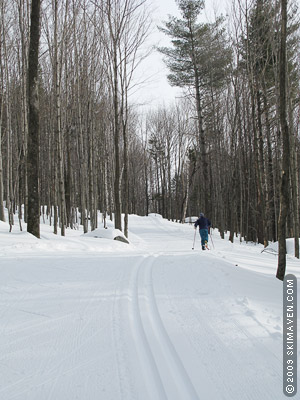 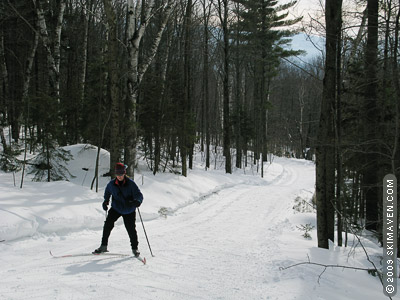 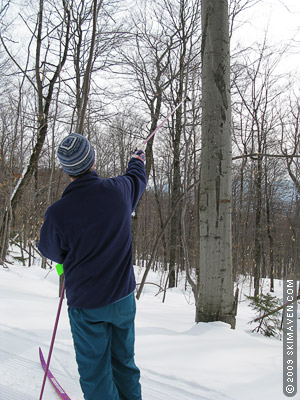 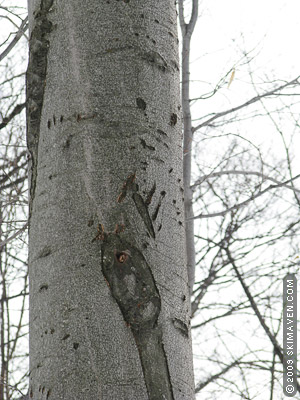 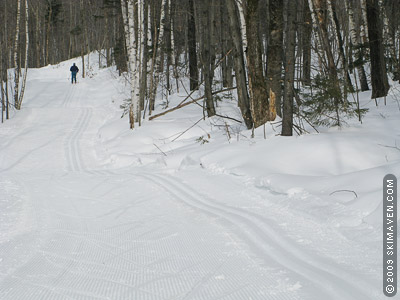 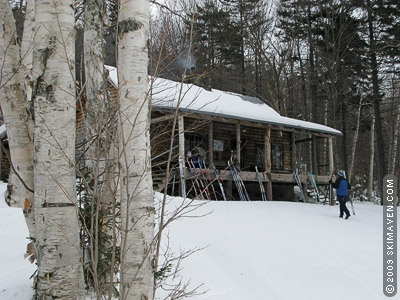 Stopping for a hot snack at the Slayton cabin. 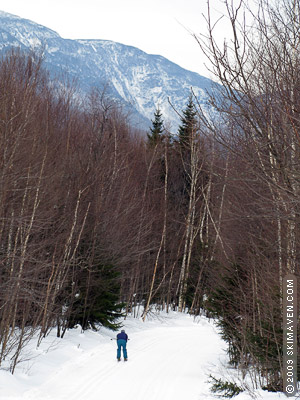 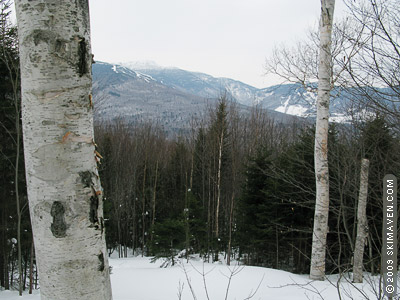 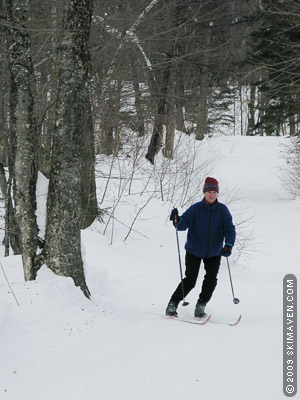 Skidding parallel turns on The Chute.

Seems like several Vermont resorts are celebrating anniversaries this year. Killington is turning 50, Sugarbush is 50 and Trapp Family Lodge's cross-country center has turned 40. To commemorate four decades of skiing, Trapp Family Lodge cut a new trail and named it "The 40 Year Trail." I would have called it the Back 40, but hey, they didn't ask.

During what must have been a 14-km loop, the Skimeister and I tried out this new trail on Saturday morning and also skied for the first time on Hare Line, which is on the other side of Mt. Roundtop when you are in the Slayton Pasture Cabin.

There were a lot of cars in the parking lot on Saturday due to the nordic ski racing event, so we were glad we had arrived rather early to beat any crowds on the ski trails. A helpful nordic center employee told us about the new 40 Year Trail as we bought our trail passes. We decided to take that route instead of Parizo Trail up to the Cabin.

We headed out on our classic equipment on Sugar Road, then Russel Knoll to its intersection with the 40 Year Trail. The Trapp's employee warned us it was a trail that skied longer that it looked. Even so, I was still a bit surprised when I thought we might be closing in on the cabin and instead we came upon a "Half-Way Point" sign. Luckily, the sun was out and I was feeling good on my skis. I have been practicing my stride and I think I'm getting to be a more efficient nordic skier.

We passed three skate skiers descending the trail. I'm sure they had some downhill thrills. But we were climbing up the trail instead. The grooming was great, as it always seems to be at Trapp's, and I was thoroughly enjoying the quiet of the hardwood forest, the sunshine and the animal tracks that showed themselves in the snow. The Skimeister even spotted a tree that had been marked by a bear as it clawed his way up to the branches.

It took a while to get up to the Cabin, including stretches of the trail that required the herringbone, but I was very happy on the trail. The Skimeister thought it lacked some character; he likened it to a logging road.

We stopped in to the cabin for some hot cider and a bowl of bean and vegetable soup. I tried to dry out my damp mittens and fleece by the fireplace so that I'd be warm for the downhill portion of our ski tour. By the time we left, some other skiers were appearing from the Parizo Trail for an early lunch as well.

We back-tracked just a bit down the Haul Road and beared right instead of heading left toward the 40 Year Trail. Here you get a great view of Smugglers' Notch and Mt. Mansfield.

After zipping down the Haul Road just a bit, we came upon the sign for the Hare Line trail and decided to give it a go because we wanted more ups and downs and turns than the Haul Road affords.

So we climbed and climbed up the Hare Line, knowing that at some point we would have a fun downhill. It was a neat, narrow trail through the woods with some mountain views. And sure enough we did enjoy fast downhills after our climb. Logically, the next run we encountered was Bobcat (he probably was chasing the hare). This is where I really put my speed control to the test. At first I was sticking with my wedge (or snowplow) but I saw other skiers having fun doing parallel turns so I started doing them, too.

When you are on skinny skis, the parallel turns are more like skidding turns, but by adding a pole plant I was really getting the hang of it. It made the narrow downhills so much more fun than if I had done them in a super-wedge!

We reconnected with the Haul Road and then soon came upon The Chute. I was feeling pretty good about my turns so down the Chute I went, instead of whimping out and taking the By-Pass. I can see that the By-Pass is the way to go if you ascend the Haul Road, however. I had to chuckle as we passed a trail called Triple By-Pass.

The Haul Road brings you to a crossing with a backroad called Luce Hill Road, where we stopped for a few bites of our peanut butter sandwiches. I was growing tired and needed some peanut power. We also came across a very small cemetery for the Luce family from the 1800s.

I was really enjoying this entire tour. By the time we rounded the corner by the Trapp's villas and we saw the main road, I was pooped out. There were hills to climb to get back to the lodge, however, so I just kept plodding along. The sun was warming up the snow in this open area and I didn't have as much kick as I had earlier.

Back to the car we went and I added a down layer and had some hot tea from that I had made in a thermos (a brilliant early-morning idea, I must say). We were ready to watch others expend energy in the UVM Winter Carnival ski races. <link post fast-paced-nordic-ski-racing-action-at-2009-uvm-winter-carnival external-link-new-window winter carnival>See our photos and results on this post.

What's a great way to end a fabulous skiing day in Stowe? To do some aprés, of course. We headed over to The Shed pub on the Mountain Road before the crowds came off of Mt. Mansfield. We snacked on the free popcorn, drank some of their homemade beer and enjoyed a Shed burger before heading home.

These are the kind of days I love when skiing in Vermont. On tap for the coming week is some downhill skiing at Burke Mountain in the Northeast Kingdom and cross-country skiing at Craftsbury and Highland Lodge nordic centers.