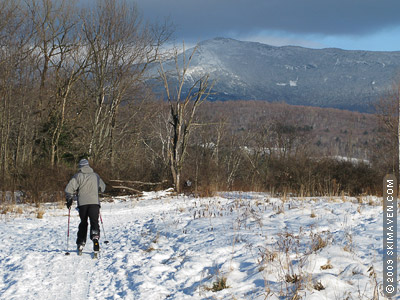 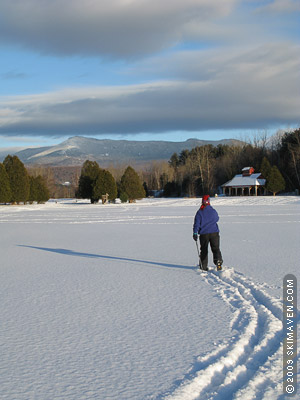 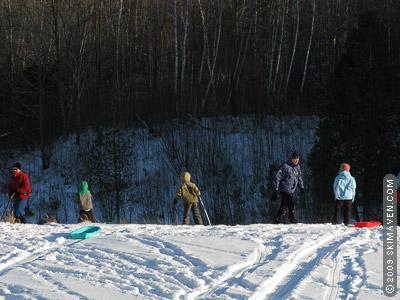 Friday night brought some snow our way in northern Vermont. As it was before Christmas, this stuff was super light and fluffy. Sugarbush resort reported seven inches of snow, Stowe says 5, Ascutney ski area reported 2 inches and Burke 1 inch. Looks like the spine of the Green Mountains won out on this little storm.

This light powder would be amazing if we had more of a base! The post-Christmas meltdown affected skiing terrain that didn't have a snowmaking base. That means that the mountains don't have all their runs open. So, when the Skimeister and I considered what we would do outdoors today, we had to weight the price of a lift ticket and potential holiday crowds with the idea that we could find something fun that was free. We decided to save our pennies for the lifts on another day.

By late this morning the skies turned blue and the sun was strong. It was a gorgeous winter day. We decided to find some flat-ish terrain for cross-country skiing. We made a good pick: Mills Riverside Park on Route 15 in Jericho, Vt.

Mills Riverside has wide, open fields and meadows, as well as the wooded South Hill, with a few trails to follow. In many places, you are afforded gorgeous views of Mt. Mansfield, which had some interesting lenticular clouds over it today. Apparently, that meant it was windy up there.

Nothing is groomed at the park; it's just a nice place to tool around on your cross-country or light backcountry gear. The entire park is 216 acres (!) with six miles of trails. I plowed through the powder, often seeing the grassy surface below it, and I worked up a bit of a sweat despite the whipping wind.

Riverside also has a small skating area, sledding hill and an area where dog owners bring their pups to run free. With a handsome bandstand/picnic shelter, this conserved land is truly an asset to the towns of Jericho and Underhill, Vermont.

Looking ahead: The mountain forecast calls for more sun and wind on Sunday. However, the rest of the week the word "snow" is mentioned nearly every day. That's just what the doctor ordered.