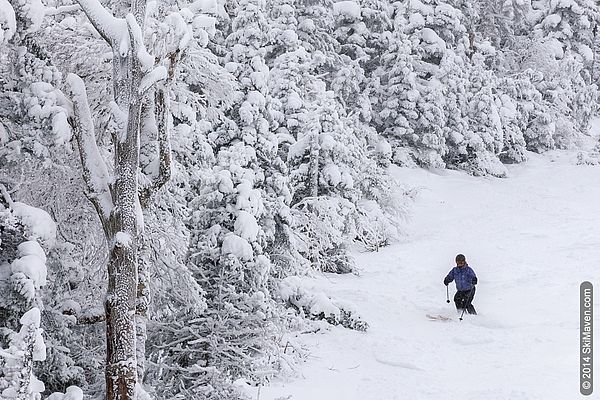 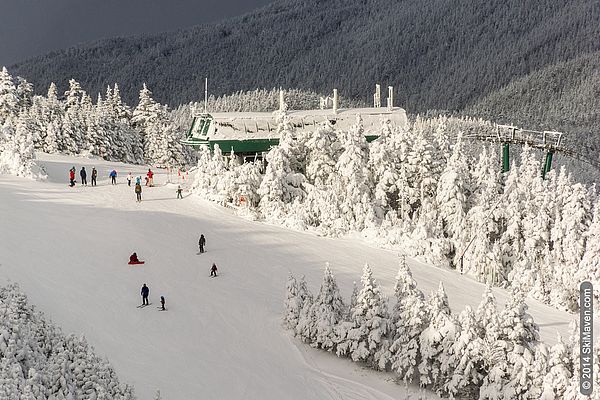 Looking down from the Summit Quad to the North Ridge Express Quad. 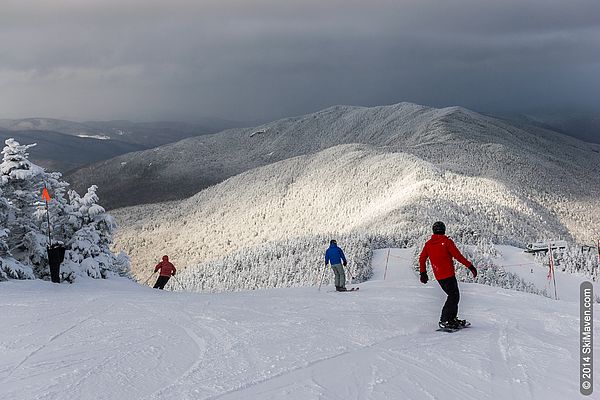 Skiing from the top of Rim Run at Sugarbush. 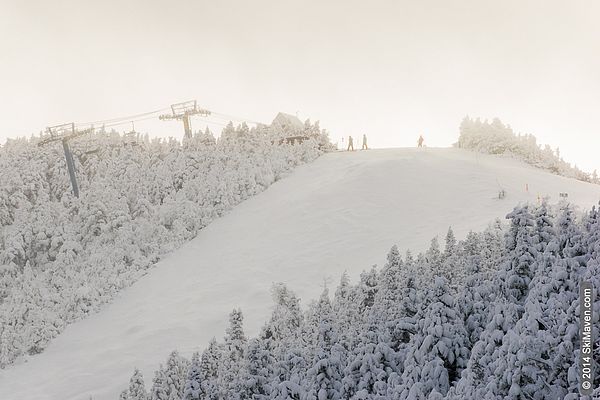 A view of Sugarbush's FIS trail near the peak.

Today was all about elevation.

The Skimeister and I made our way over to ski at Mt. Ellen at Sugarbush on this first day of 2014. Mt. Ellen is the northern half of the ski resort.

I wasn't quite sure what to expect in terms of crowds or snow conditions. What we found were no crowds, despite being a holiday. It was cold—no doubt about it—but those intermediate and expert skiers who braved the cold and took the lift to the summit of the mountain were rewarded. The snow was packed powder up there (and powder on the sides of the trails) with the exception of a couple of high-wind, high-traffic areas that got scratched off.

Sugarbush reported that the top of the mountain had picked up two inches of snow overnight and eight inches over the last 72 hours. We noticed!

The conditions at the snowy upper-reaches of the mountain were in contrast to the lower half of the mountain, which was frozen granular and/or hard packed with icy areas. What a difference the elevation made recently!

We warmed up in the Glen House in between runs off the Summit Quad. Our favorite turns of the day were on Rim Run and Looking Good. There was some fresh snow to play in.

I also enjoyed skiing the lower half of upper FIS. It's a very steep run that doesn't get a ton of traffic, so I figured I might find some soft snow somewhere on it. I was right; I found some powdery bumps on the side of the trail. Nice!

We wanted to ski down the mountain a bit to ride the North Ridge Express Quad and when we did so, we realized we had been wise to ski the top of the mountain as much as possible. We were skiing on frozen granular on the trail called Which Way. We decided to return to the mountain top for the last runs of the day!

Mt. Ellen is the highest of the peaks at Sugarbush. It tops out at 4,083 feet, making it Vermont's third highest mountain. If it hadn't been flurrying most of the day, we would have seen some great views. The sun peeked out long enough to snap a few sunny photos of snow-encrusted trees and white mountain ridges.

We saw that the resort was blasting snow on the beginner run called Northstar, located at mid-mountain. That should be fun for novices to ski when the snowguns move out! We also saw some interesting freestyle features set up in the Riemergasse Park, at the bottom of the mountain.

Happy New Year to you, and happy trails!