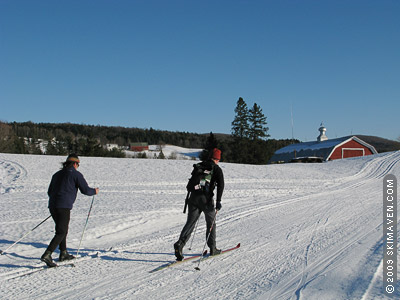 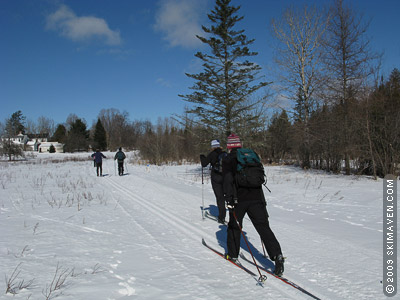 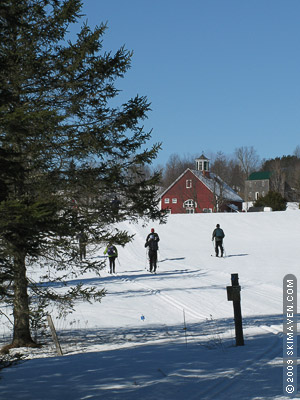 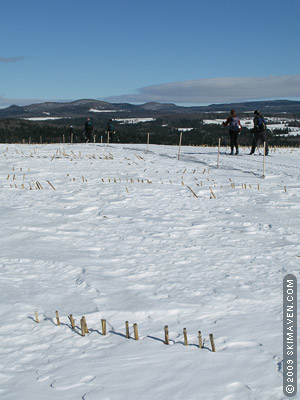 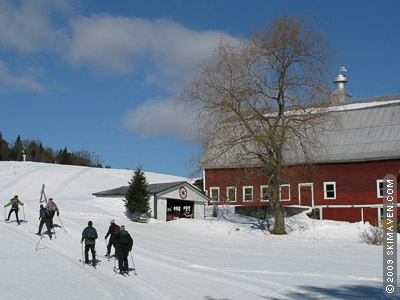 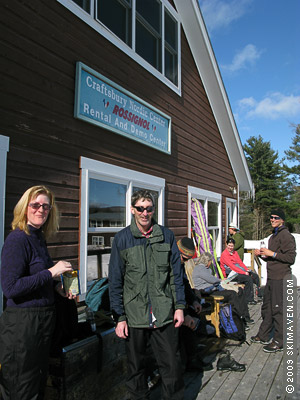 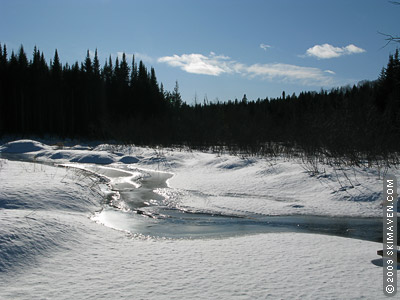 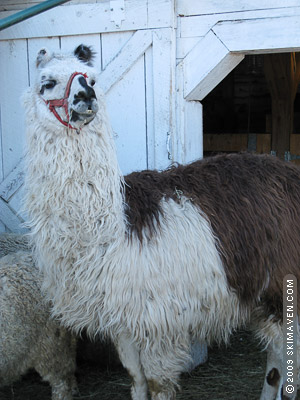 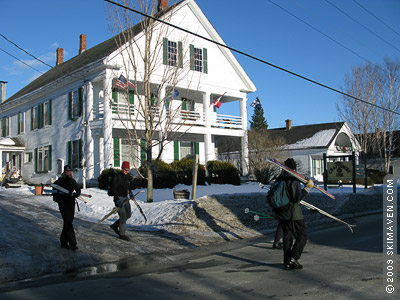 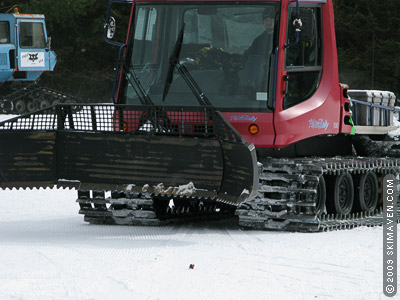 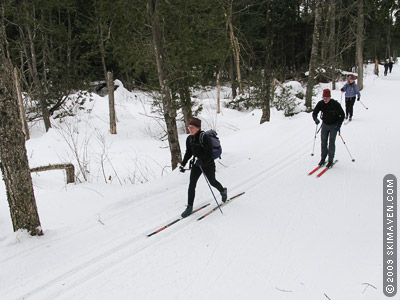 A scenic Sunday ski on Ruthie's Run and Extension. 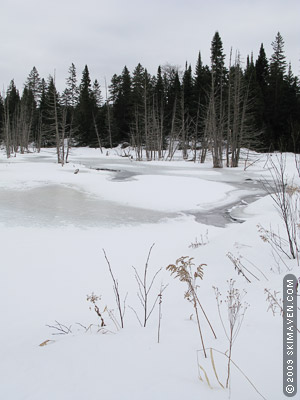 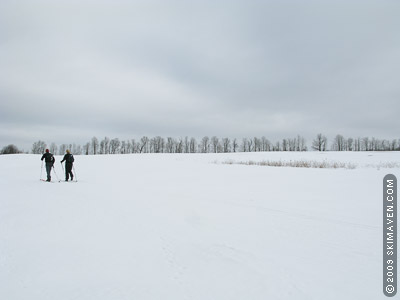 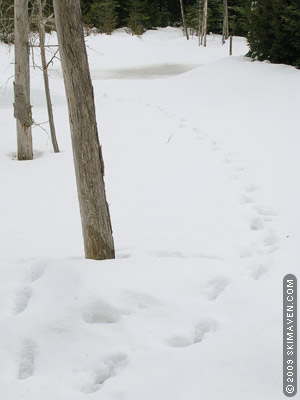 What would we do without Pisten Bully, Bombardier and other wonderful grooming machines?

Well this past weekend, we wouldn't have done much cross-country skiing without them. As expected, the snow had frozen up after a bout of warm weather and some rain. We were up in Craftsbury, Vermont, for a weekend of nordic skiing with friends, so we decided to ski where they had a real grooming machine—the kind that can dig in and churn up the ice and snow. We headed for the trails of the Craftsbury Nordic Center, which does indeed have a Pisten Bully groomer and they had put it to good use.

Whew, without it we would have been unhappy campers for sure!

We started the Grand Tour loop behind the Craftsbury Inn in Craftsbury Village, and we were very pleased with the corduroy that had been laid out for us. Still, it was very fast snow that made the downhills really exciting!

Starting where we did, we began with quite a bit of climbing on the expert-rated trail. We skied from Craftsbury Village up to Craftsbury Common, which has lovely white-clapboard homes and buildings that make up tiny Sterling College. Skirting around the edge of the college, we then started a downhill on a cornfield that had tremendous views.

A bit later we were disappointed to find that the section of the Grand Tour that crossed over Little Hosmer Lake was closed because it had not been groomed. One look at the frozen surface of the closed trail was enough to see that this was the right decision. I bet the lake crossing would have been very icy, rather than snowy.

So we continued our descent on the Grand Tour Cut-off and later started climbing up to toward the Craftsbury Nordic Center.

I really enjoy the trails at Craftsbury because of the variety of scenery that you can enjoy. The Grand Tour took us past bright, red barns and horses, over fields, past small villages and through the woods. The sun was out and it was a gorgeous ski tour with friends.

The Skimeister and I and the others cooled off at the Nordic Center and ate some lunch before hitting the trails again. (Bring your own lunch as there are only a few snacks and hot drinks available.) I went with two friends to ski the Duck Pond trail before heading back down the Grand Tour trail to return to Craftsbury Village, where we had started our day.

The difference between the sunny spots and faster, shady areas on the trail were very noticeable and kept me on my toes. I was on very skinny classic skis and I was making good use of my wedge (snowplow) to check my speed during the many descents.

Some of the Grand Tour trail that leads to the village follows the Black River. This was especially pretty today with the ice, snow and blue skies. This is also the connector trail to Highland Lodge ski trails. In all we skied 13 km on Saturday—more than earning our lasagna dinner and pie at dinnertime.

On Sunday, the sun decided not to show itself until later in the day. This time a group of us started skiing from the Craftsbury Nordic Center. We skied Ruthie's Run and Ruthie's Extension, an 11.9-km expert-rated loop that makes up the northeastern perimeter of Craftsbury's cross-country trail network.

With the fast conditions and frozen granular snow, I ended up scraping the wax off my skis a couple of times. My snowplows tend to do that!

This is a lovely trail through the woods and through an interesting swampy area, as well. The dead trees stuck out of the ice and snow and it felt so remote that we thought we might see a moose. We did see signs of animals, with tracks crossing the trail many times.

The end of the well-groomed loop brought us near the eastern shore of Big Hosmer Lake, which is where Craftsbury Outdoor Center holds its famous sculling workshops in the summer. You can also ski on this lake when conditions allow. We made it back to the center and had some lunch before saying goodbye to our friends.

Craftsbury Nordic Center is worth the drive north from Stowe or Smuggler's Notch. You'll find top-notch grooming on its 85 km of trails, excellent rental equipment, ski lessons and a relatively cheap trail pass at $10. The Catamount Trail also crosses through this cross-country trail system on its way to Quebec.