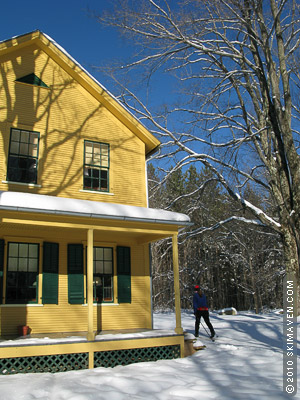 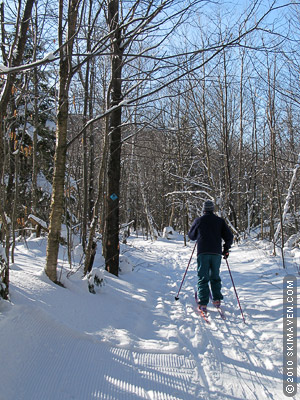 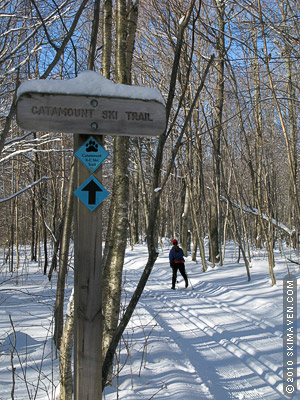 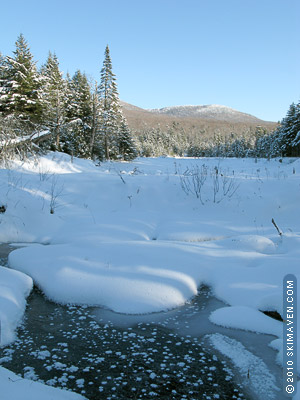 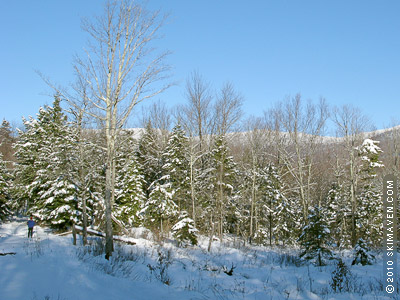 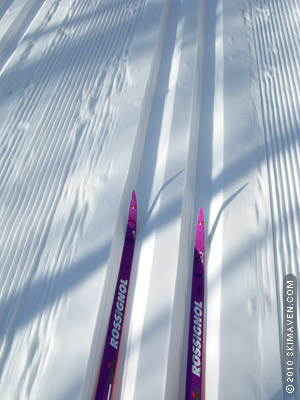 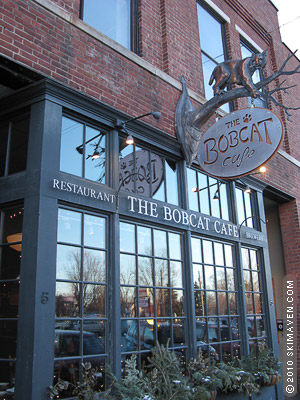 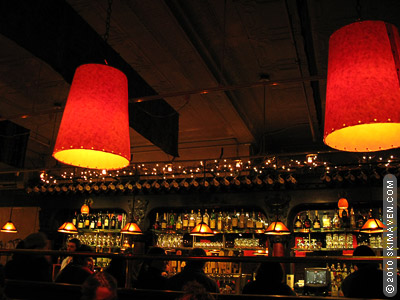 The kids that go to Middlebury College have it good. They can ski at the <link post you-went-to-the-middlebury-snow-bowl-yes-and-i-liked-it external-link-new-window about the snow>Middlebury Snow Bowl and the Rikert Ski touring Center; both are owned and operated by the college.

To get to Rikert from Middlebury, we drove Route 125 up and along the Middlebury River, through the micro-village of Ripton, and then to the college's scenic Bread Loaf Campus. Rikert nordic center is based in one of the barns on this historic summer campus known for its writers' conference. The mustard-colored historic buildings stand out against the surrounding stark white meadows and the forested hills and mountains.

After checking in for a ticket on Saturday afternoon, the Skimeister and I decided to ski a loop to give us a good taste of what Rikert had to offer. The Skimeister had raced here in high school, but never had time to explore the trail network. As we were shoving off for our classic tour, high school ski teams were packing up and leaving after a sunny day of cross-country ski racing.

While there were easy-going practice loops in the fields on both sides of Route 125, we headed for the forest. We first went up the Battel trail to ski among the pine trees on the Gilmore trail. Gilmore dropped us onto a forest road, number 59. We walked a couple of minutes before reaching the snow-covered, groomed and track-set stretch of the road. A handful of snowmobiles passed us here.

I wasn't excited to be skiing uphill on a snowmobile tracked road, but once we turned off onto the Brown Gate trail, things got more interesting. On a pair of perfectly formed tracks, we got to tuck down a long, gradual hill. It was really fun!

Then, another surprise. At the junction with Middleranch, the trail became ungroomed. We were on skinny skis and I was wondering if my fantastic day was going to take a turn for the worse.

Luckily, there had been enough traffic to set decent tracks so it was still fun. We passed a lovely frozen beaver pond with a view that paired a bright blue sky with a snow-sprinkled Bread Loaf Mountain and the Green Mountain range. A bit more climbing and maneuvering around wet spots brought us back to “civilization”-- Rikert's well-groomed trails.

We contoured along the Inner Frost trail, named after the poet Robert Frost, who spent 40 summers teaching writing at Bread Loaf. We turned onto Rock Garden, a steep and turn-filled trail that tested one's snowplow and turning skills! Still, it was great to be going downhill after a long day on skis.

Rikert is a pretty trail network with very good grooming. All of the trails we took were in the woods and a few times I saw markers for the border of National Forest Land.

We zipped along the top of the Figure 8 loop before descending quickly and steeply on Cubeta back to the Bread Loaf campus and the nordic center. By now the sun was getting low and I was ready to stop skiing. The combination of tele skiing and classic skiing had wiped me out.

I look forward to returning to Rikert to explore the other loops that crisscross the hillside above the campus. I'd also like to check out more of the Catamount Trail in this area. We actually followed part of it on Gilmore and the forest road.

But for now, my sites were set on some après ski munching at the Bobcat Café in Bristol, Vermont. It was about 25 minutes to the north via Route 125 and Route 116.

We've stopped here a handful of times over the years to drink their handcrafted beers and eat from their delicious menu. We tend to stop in after hiking in the area.

Saturday night we enjoyed a wheat beer and a stout at the antique bar before being seated for a table at 5 p.m. Their choices on the menu were quite creative, but they also had solid standby's such as a steak and burger. The steak and garlic mashed potatoes tasted extra delicious after a very full day outdoors in the sunshine.

Honestly, it's pretty tough to top a day like this.