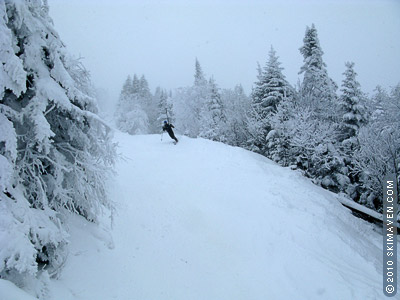 Snow fell throughout the day, making for good turns. 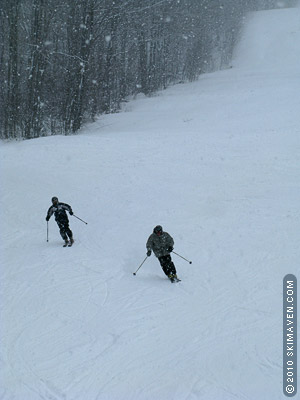 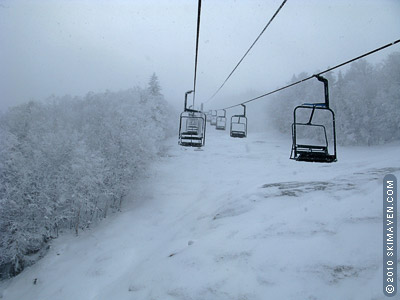 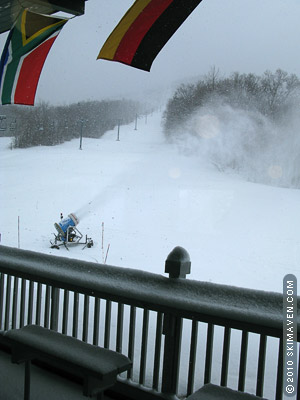 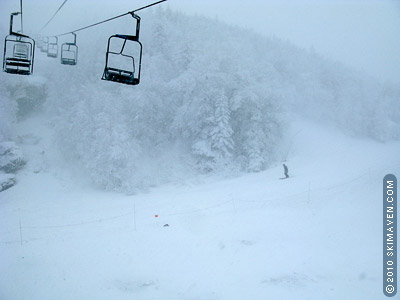 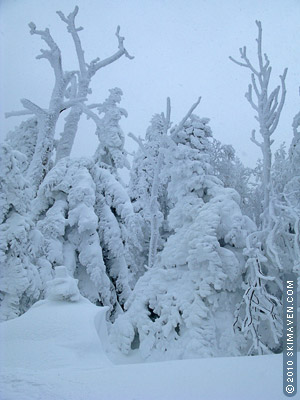 I caught myself grinning underneath my balaclava today. I was riding the Sterling Summit chair at Smugglers' Notch for my first runs of the season, looking left, right, up and down when I realized I was grinning like a fool.

I was surrounded by winter! The trees on the top half of the mountain were encrusted with snow. When you were far enough away from the sound of snowmaking, you could hear the branches clink together as they swayed in the wind.

It was snowing — dropping big fluffy flakes — all morning and I was bundled up against the elements, ready to give my ski legs their first workout. I was one happy skier. Pleased as punch. You get the idea.

Smuggs had a selection of about three ways down from the top of Sterling today: Upper and Lower Rumrunner, Smugglers' Alley, Crossover and Lower Exhibition. I took Rumrunner all the way down for my first two runs. The cover was good and on top of the machine groomed snow there was up to four inches of fresh snow, courtesy of Mother Nature.

The mountains of Vermont are currently <link http: www.erh.noaa.gov btv html snow.shtml external-link-new-window details from>enjoying a very welcome snowstorm. This comes with temperatures that will drop through the week, allowing ski resorts to continue to blast their snowmaking.

Today Smugglers' Notch was making snow outside the base lodge, on the Birch Run terrain park, and on these trails to the right as you ride the lift up: Black Snake and Practice Slope. The online snow report also said they were blowing snow on some green and blue trails down on Morse in the village area.

After I warmed up with Rumrunner, I noticed that Smugglers' Alley was open; it's on the left as you get off the lift. A sign warned that the run was for experts only, and since it didn't say "Thin Cover" I checked it out.

After some powdery mellow turns on the top, I was greeted by giant whales. They had been making a lot of snow on this trail and they left the whales there. I had to pull out my camera at the top of this part of the trail because the trees were incredibly plastered with snow — likely a mix of manmade and natural snow that had been blowing in the wind that whips up that trail. Very cool.

Some smaller moguls had been created on the sides of the trail and they were fun to play in, but a bit challenging because some were wiped clean of soft snow, while others were powdery soft. It made for a very interesting, challenging run. I had to do it again. I was glad my new skis had amazing edges, as I was able to make turns even on the scoured sides of the whales of snow. I had my first fall of the season on this run, luckily landing atop one of those soft moguls. Pas de problème.

The snow coverage was good all morning. I really only had to start avoiding some small rocks late in the morning — you know, those small stones that somehow get kicked up during early and late season skiing.

After a long autumn season with a lot of work and family commitments, I was so very pleased with my wintry first day of skiing. And just think, there's so much more to come!

If you got out this week or weekend, let us know how it was!