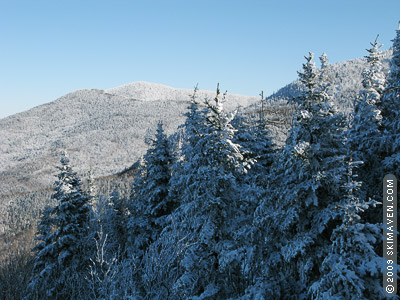 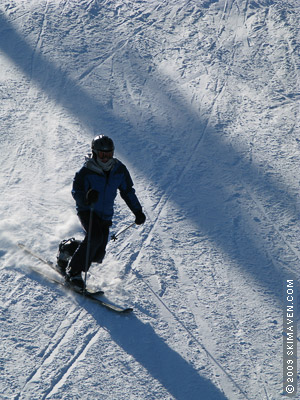 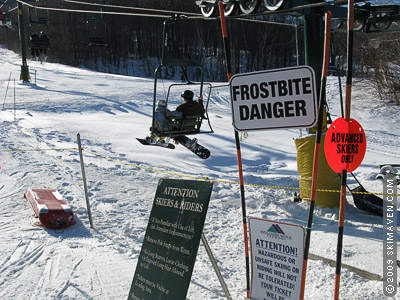 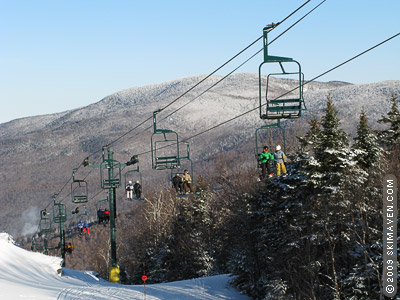 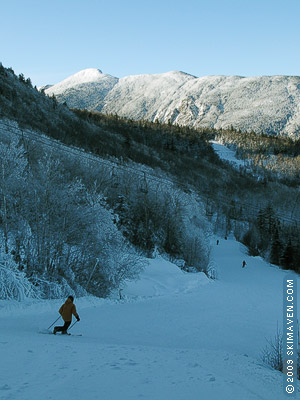 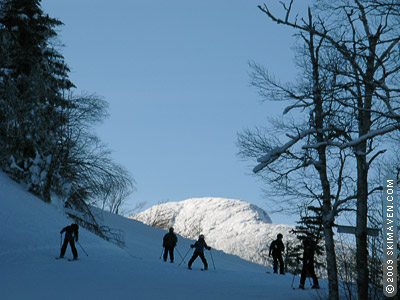 We were on the lift at Smugglers' Notch this morning with some friends by about 8:30 a.m. An hour earlier the temperature had been a balmy 5 degrees at the top of Sterling Mountain. Luckily, the sun was out all morning and temperatures felt higher than they have in a couple of days.

I had come prepared with three layers of fleece and my shell jacket; liners in my mittens; and my balaklava pulled up high over my cheeks. Except for my toes later in the morning, I was really quite toasty.

We skied off Sterling as there was only one run off of the Madonna 2 chair. We tried that once and it had pretty good and fast snowmaking snow, but the chair ride and run were both in the shade. We wanted to bask in the sun, so back to Sterling we went.

We enjoyed nice corduroy conditions during our first runs. Not many people were around so we did GS turns all the way down Rumrunner. We also ventured onto Upper Pipeline, Harvey's and Upper Treasure Run. All had natural snow so we just had to watch for rocks. There were some moguls and some soft snow here and there, making these my favorite runs of the morning.

As more people arrived at the mountain, Rumrunner and Lower Treasure Run started to get skied off. Thomke's was more fun last weekend when the snow was fresher, but worth exploring anyways.

I enjoyed skiing with my shadow as the sun rose higher over Sterling Mountain. I really do think I ski better in the sunshine. However, I'd say it's about time for another snowstorm. Heck, they are getting dumped on in DC and they really don't need it there!

Smuggs was making snow on the top part of the Chilcoot trail. Hope we won't have to wait too long for the trails to open from the top of Madonna Mountain.