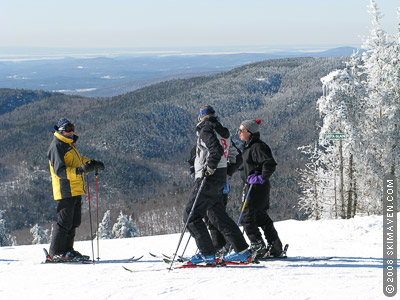 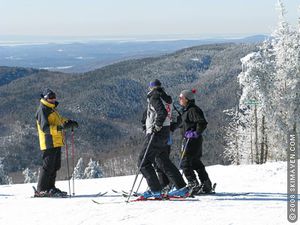 Ah, nearly Labor Day. It's about time to lock in to the best deals available on season passes and skiing discount cards in Vermont.

The Skimeister and I are planning to ski around Vermont resorts and the backcountry a lot this winter, but we also want to ski Smugglers' Notch at least eight times or so, so we looked into the the Bash Badge Plus. The best price is had when you bag the badge before Labor Day.

This discount card allows the holder to buy $25 ski tickets during the season. The Bash Badge Plus (at $169 before Labor Day) also gives you free skiing from opening day until 12/5/08 and 3/2/09 through closing day. Wouldn't it be great if early- and late-season skiing was as good as it was last year?

Other ski passes at Smugglers' Notch are at their best value before Labor Day and the next best deal is before Halloween. At Sugarbush, season passes are best priced before September 17. At Jay Peak, grab your pass before October 13 to save some cash.

Bolton Valley's early deals end September 22. At Cochran's Ski Area, get 'em while they're hot before December 1. Consider a Mad Card or season pass before October 15 at Mad River Glen ski area, and before November 1 at Burke Mountain ski resort to get the best deals.

Stowe's early-purchase rates for season passes are valid through October 24. It appears that Stowe's Points Card is $75 no matter when you buy it. You get a slightly discounted ski ticket (priced at $59 instead of $89—gulp!) and you earn points toward a free lift ticket with each purchase at the mountain. Stowe usually teams up with the Church Street Marketplace in Burlington to offer free Points Cards to people who dine or shop during a set week in September. I'll give you a heads-up on that as soon as possible.

For now, it's time to sharpen those pencils and figure out how many days you want to ski at your favorite Vermont ski resorts and what that might cost you. Then get online and purchase a pass or ski discount card before the best deals fade away with the summer sun.