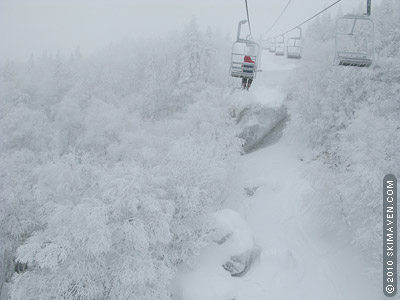 Frosty scenes from the chairlift this morning. 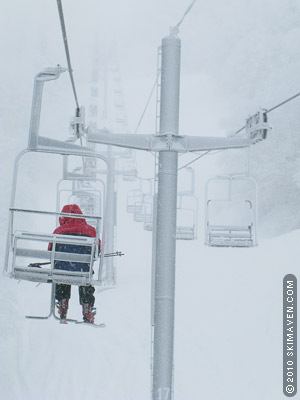 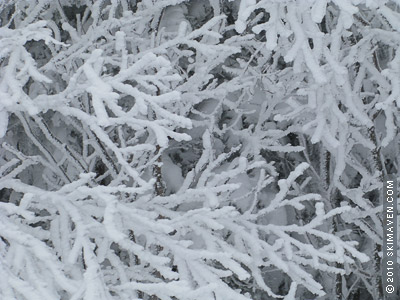 Don't you hate how work gets in the way of skiing?

Well, we had to work the past couple of days — have to pay the bills — so we couldn't ski in this weekend's new snow until this morning. This was a monster storm in Burlington and the Champlain Valley, dropping about two feet of snow and breaking a record in Burlington with 33 inches! But strangely enough it was not quite as intense elsewhere.

The Skimeister and I were checking the snow reports and decided that Smugglers' Notch may have received the most out of the storm. We got up early to hit the lifts when they opened this morning.

We missed the soft powder by one day. Last night or this morning it actually sleeted, misted or rained so there was a thin crust over yesterday's powder. If you've ever had fried ice cream, the snow conditions were like that. It has a thin crust, but it's good!

My favorite run of the morning was my last run in the soft snow that had been churned up on the edges of Upper and Lower Doc Dempsey's on Madonna Mountain. The moguls were rather large and it was really fun! Plus, I had the run to myself. I love Monday skiing!

Smuggs was reporting 24 inches of new snow in the past four days. I don't have many photos because I was skiing in a light, icy mist — the kind that makes you melt your goggles with your hand and wipe them dry half way down the hill. My hands were pretty cold.

On the mountain, trees and branches were coated with one to three inches of rime. It looked very cool.

I wanted to remind our readers that I have a rather lengthy <link post vermont-lift-ticket-discounts-skiing-deals-in-2009-2010-for-vermont-residents-and-everyone external-link-new-window ticket>listing of good Vermont ski ticket discounts and deals. Check out that post and see if you can score a deal the next time you head to the mountain. And please share with other readers by posting new bargains in the Comments section.

And don't forget that this week is a <link post snow-cold-descend-on-vermont-and-a-free-learn-to-ski-deal external-link-new-window to>free learn to ski week in Vermont. You must make reservations, so check it out!