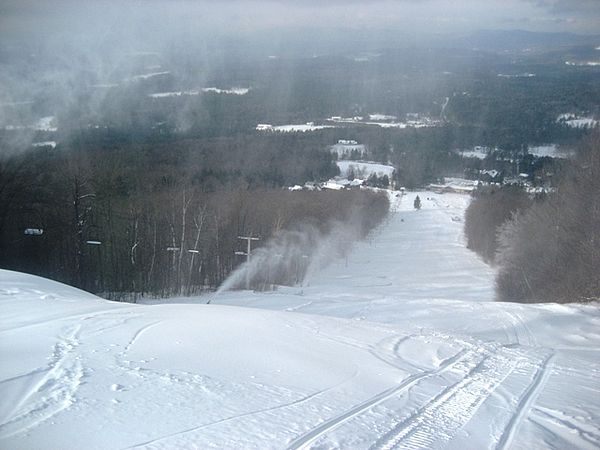 This season it was challenging to get information on Vermont ski resort mountain improvements. You see, I like to write about the on-mountain, skiing-related improvements because those apply to all skiers and riders, whether or not you are dining at or staying overnight at a resort or not. While this year there are some serious dollars being spent here and there on slopeside lodging, ice rinks, mountain coasters and art centers, the skiing-related improvements are fewer and farther between.

Is it a sign of change in the tastes of the skiing public? The recession? New priorities from the boards and owners who oversee Vermont ski resorts? Or just a quiet year? I think it’s a little of each.

While snowmaking, lift and trail upgrades may not seem as sexy as multimillion-dollar slopeside hotels, they sure make a difference when you are out there carving turns! And that’s something we all enjoy!

In this blog post, let's get started with a snapshot of 2010 - 2011 skiing-related improvements at southern Vermont ski resorts that make a triangle: Bromley, Magic and Stratton.

Bromley plunked down some funds to purchase a Prinoth Bison winch-cat. They say it will groom the steepest terrain providing a more consistent product for the most advanced skiers and riders. They also purchased an AEBI mountain mower to mow trails throughout the off-season and mow terrain that was previously inaccessible. They report that the mowing coupled with the fact that Bromley's trail system was engineered to be skiable on four inches of snow will make for a better ski experience across their sunny mountain.

Those who frequent the ski area will probably like to hear that they've constructed a new drop-off area, improving traffic flow into and out of the base area. 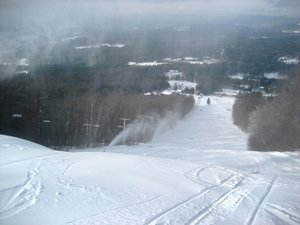 In an effort to keep Magic Mountain in operation and raise capital to invest in the infrastructure, the ski area has begun selling shares. And in the off-season they have both staff and volunteers making improvements on the mountain.

Magic’s staff members have been tweeting about the off-season work they’ve been doing to increase snowmaking efficiency through renovated air and water lines and a streamlined snowmaking system. They’ve been testing for leaks and fixing what they find. The Black Line trail has been a key target for snowmaking capacity, as many trails lead to it and people also see it from the access road!

This month they have also been weedwhacking and cutting brush to get the trails better prepared to hold snow. Mechanics have also been working on getting the Black Line chairlift and a second groomer up and running. To keep up on Magic’s mountain improvement work, <link http: www.savemagicvermont.com external-link-new-window>visit this Web site. It's informative and updated frequently.

The resort is making adjustments to its snowboardcross course, and it has hired two full-time staff members to fabricate new features and tinker with the old features in their terrain parks.

Stratton is welcoming two new Prinoth BR350 groomers to its fleet of corduroy-creating machines. They also report that they are making technology and efficiency upgrades in snowmaking and snow guns. I found these interesting snowmaking tidbits on Stratton’s site:

When are the conditions "ideal" for snowmaking?
18 degrees Fahrenheit, 40 percent humidity, winds at 5-10 mph. You need a little wind to spread out your snow. Depending on the conditions, we're maxing out on either air or water (11,400 gallons a minute). In marginal temperatures, it's air. In colder weather, we max out the water, which is far more efficient.

Makes you kinda wish for temperatures in the teens right now, doesn't it?!