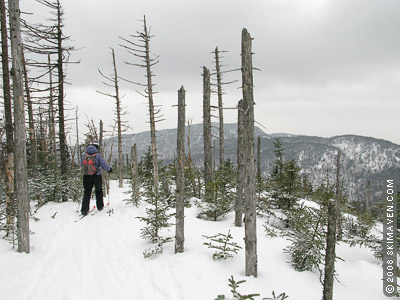 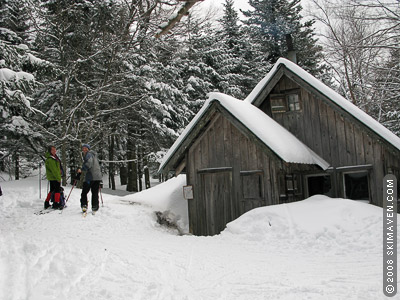 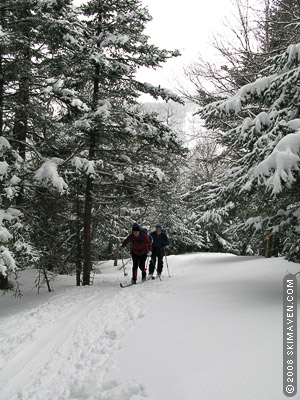 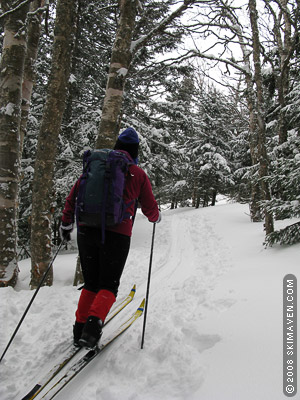 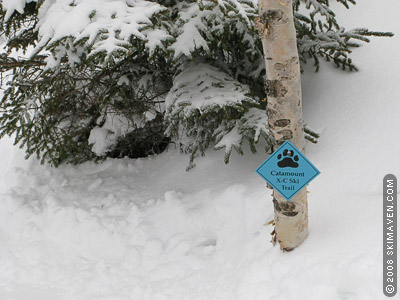 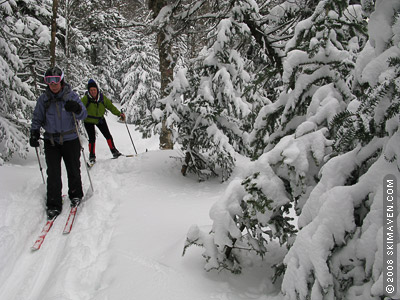 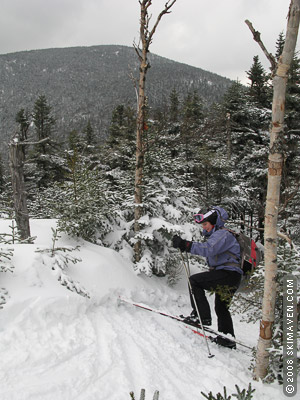 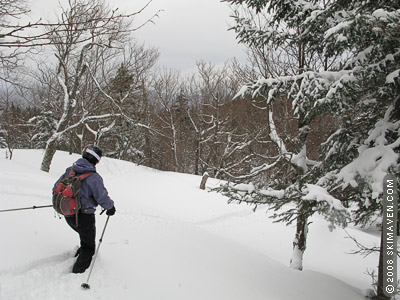 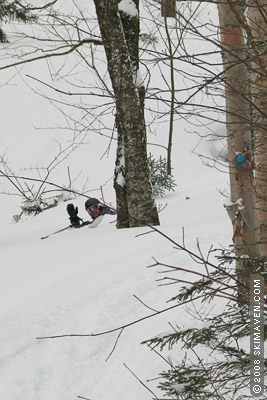 I love checklists. It gives me great satisfaction to tick things off as I complete them. Yesterday I had the pleasure of checking off the Bolton-Trapp Trail on my skiing to-do list for this season. It was the first time I had done this backcountry excursion and it was tiring, but extra snowy and fun!

The Skimeister, his step-mom and I dropped a car on Nebraska Valley Road in Moscow (a section of Stowe), Vermont, before driving to our starting point at the Bolton Valley nordic center. The car shuttle is a time-consuming one, but it allows you to do a unique backcountry trip from Bolton Valley's nordic trails up to near the summit of nearby Bolton Mountain and then down into the Nebraska Valley.

You are out in the boonies on this 9-mile trip, so you should be prepared with warm layers, food, water, a map and compass, and good company. You also need to be proficient on the downhills since you get a lot of downhill time on the second half of the trip—a vertical drop of 2,300 feet! Trés fun!

But first, you must climb. We put skins on our skis for most of the climb. I don't get to use them often, but in this case I was glad I did because you climb from 2,000 feet at the nordic center to 3,300 feet at the highest point on the route. I kept my layers light for the climb up. The skins meant that I didn't have to push with my arms all that way, which was very nice indeed.

On the nordic trails you pass Bryant Camp and head out on Birch Loop before heading right onto the Bolton-Trapp Trail, which is part of the <link http: www.catamounttrail.org external-link-new-window external link in new>300-mile-long Catamount Trail. You climb up through some pretty birch glades, which I have skied before, but then you keep on truckin'.

With more climbing, you eventually start to contour near the summit of Bolton Mountain, which stands at 3,700 feet. By this time I had put on another layer, put on my mittens and my helmet and goggles for the descent. The snow was high and the trees were low and tight against the trail, so the goggles and helmet came in handy as I whipped through branches!

Then we made our way to the top of a ridge that gives you a magnificent top-of-the-world feeling in an area where the trees have been ravaged by the wind. We were lucky that there was very little wind during our trip, so we stopped at any scenic spot we came across.

At the end of the ridge, we started the long descent down to Nebraska Valley and we got to enjoy gladed areas that had ample snow. The snow was deep enough that it often slowed you to a complete stop in areas that weren't real steep. It was fun venturing off the trail into the powder.

At one point, I was off the trail and suddenly I heard a whooshing noise and, startled, I screamed. It was a ruffed grouse that had been sitting in a hole under the snow and when I got within three feet he decided he better take off! I hadn't seen him at all and after he was gone he left a circular hole and two wing marks in the snow. Very cool.

The downhills were fun and eventually we got down lower in the valley and we started following a logging road with a pretty stream on our right. It featured small gorges, falling water, icefalls and large boulders. I'd like to come back to see this stream in the summer.

We popped out at a small parking lot on Nebraska Valley Road, near the Mansfield Trout Club, but our car was nowhere to be found. We parked at the wrong lot. But luckily, we were just a very short walk to the "overflow" lot that was further down the road to the right. Some people ski farther than this and head to the trails of the Trapp Family Lodge, whose owner, Johannes von Trapp, helped to cut this connector trail with Gardiner Lane of Bolton Valley.

It felt good to pack into the warm car and eat some snacks on the drive back to Bolton. Back at home after a quick pasta dinner, I took a hot bath and hit the sack early. I was a tired skier, but a happy skier!