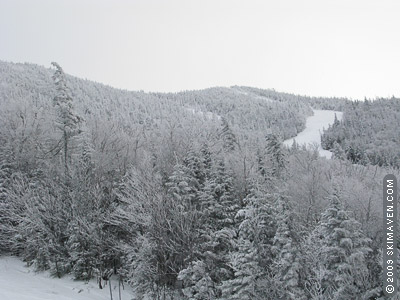 Snowy trees and skiing at Smugglers' Notch this afternoon. 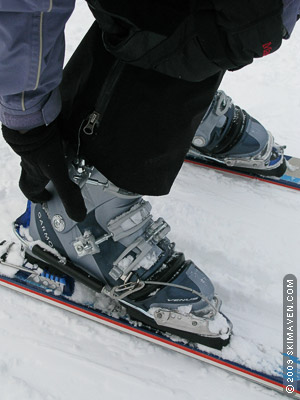 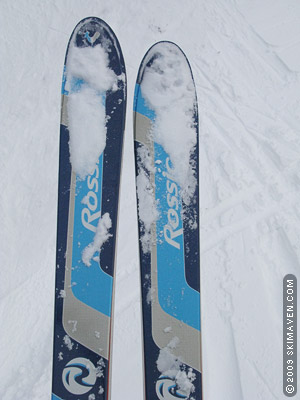 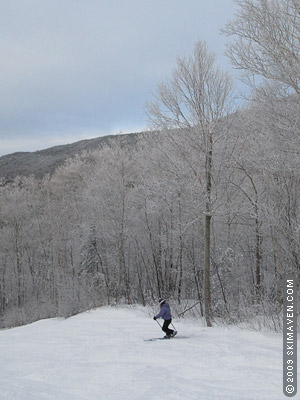 Add 'em up and you get real tele turns! Wa-hoo! 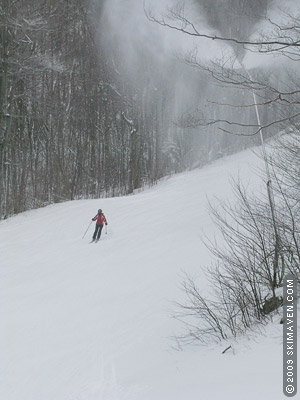 Skiing under the snowmaking guns. 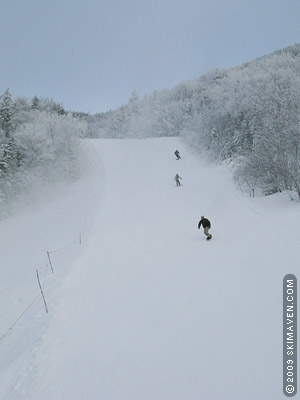 Zooming down a trail off the Madonna II chair.

We arranged our work schedule today to be able to take a few runs on a lovely afternoon. We enjoyed blue skies today -- a bit cloudy in the mountains -- and warmer temperatures. It snowed early this week, so it was a good time to try out some new gear. We zipped over to Smugglers' Notch.

I had high hopes for the equipment that I had picked up at a ski swap this fall: essentially new, three-buckle tele boots (they were demos) and brand new, fat tele skis and bindings. I was praying that having skis with actual sidecut to them would help me master telemark turns and have fun in the backcountry.

After just two dozen turns I could tell things were looking very good. Compared to my very straight Pavo backcountry skis, these fat, short slalom skis were begging to turn. It was an amazing difference. I was doing real tele turns at last!

I enjoyed soft snow on the sides of the trails off of the Madonna II chair.  I wanted to stay on the lower part of the mountain where it was less travelled. I needed some elbow room.

After a few runs we skied Ruthie's Run to Northwest Passage -- an expert trail. By that time I realized that I could parallel ski very well on these skis, so I felt comfortable doing short-radius or hop turns down just about anything. This came in handy as this natural-snow trail was wearing thin. I had to really stick to the edges of the trail. Smuggs continued to make snow today to add to the base of its trails.

It was a great afternoon to be on the snow trying out my new gear. I'm hopeful for some more new snow this Friday and this weekend. Wouldn't that be a nice way to greet the New Year?