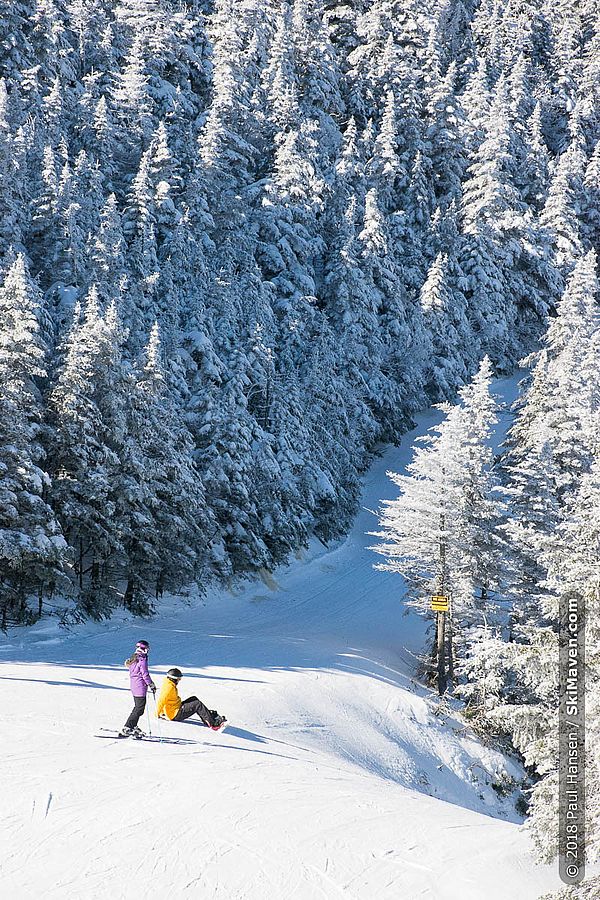 Snowy trees at the top of Nosedive. 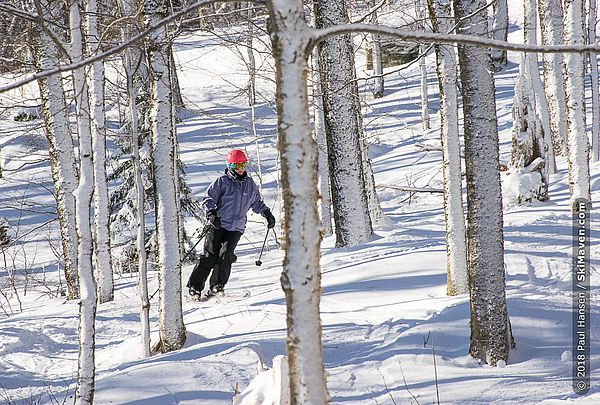 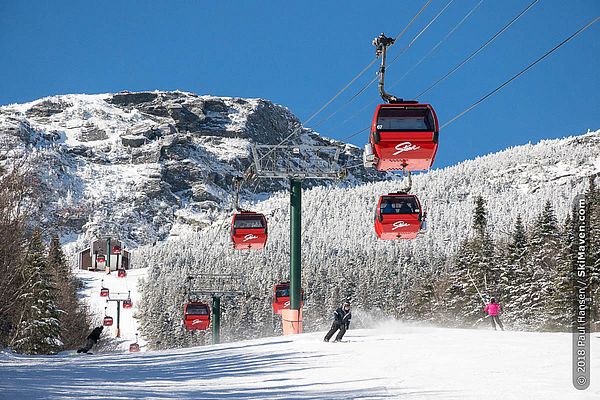 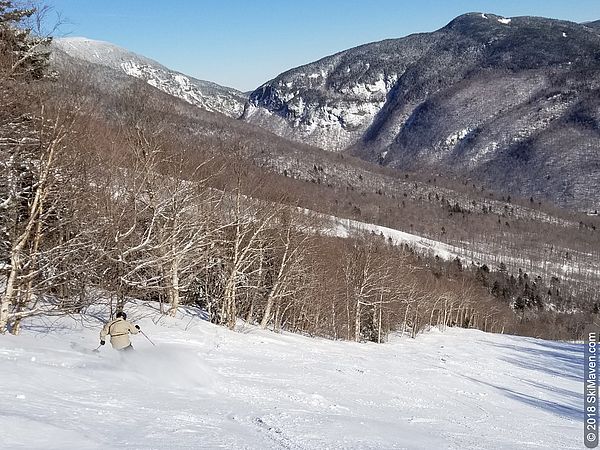 Freeze, thaw, freeze, thaw. Yes, this weather rollercoaster is getting a bit old.

We wanted to do some lift-served skiing today in the sunshine and we weren't expecting the conditions to be too great. But we were pleasantly surprised at Stowe Mountain Resort today!

The freshly groomed trails were good in the morning and midday. On high-traffic, steeper spots it definitely got to be hard-packed linoleum without much snow to push around. Think of the first curves on the expert Nosedive and Liftline trails. But otherwise we found some good turns.

We do recommend that you have had your skis tuned rather recently so when you do hit the slick or icy parts of the trails, it won't throw you. And, get out early so you reap the benefits of fresh grooming.

Our favorite stretches were the middle of National, which is one of the Front Four trails. On skier's left there were a couple inches of snow to make the turns fun. Nosedive (below the entry S turn) was good in the morning. Mid and lower Hayride was fun. We also enjoyed doing the Rimrock trail, which we never ski. It crosses from upper Nosedive over to Perry Merrill near the gondola. The evergreens were snowy and the snow was soft.

This being a weekday, we skied right up to the Fourrunner Quad without delay. Pretty sweet.

We also did some mellow exploration in the woods. In some places the snow was wind-slabbed and very difficult to turn in. (I leaned way back to try to surf my way toward a trail.) In other spots, especially where there was some skier traffic, we skied through a couple inches of snow that was soft and turnable.

The resort was making snow on the Perry Merrill trail so everyone who took the gondola was careening down Gondolier. We snuck over to Switchback and lower Chin Clip to get some privacy. On trails like these where there hadn't been much grooming or traffic, there was a bit of fresher snow on top, but our skis crunched through rough, frozen stuff below. Sometimes today the skiing was a bit noisy.

The resort was also making snow on North Slope and T Line. Temperatures rise for the weekend, so they'll stop the snowguns soon.

The best part of today was spending a flex day from work to ski under bright blue skies on snowy Mt. Mansfield. Oh, and a tasty burger, Cubano sandwich and beers at Doc Ponds in Stowe didn't hurt either! We're spoiled rotten!