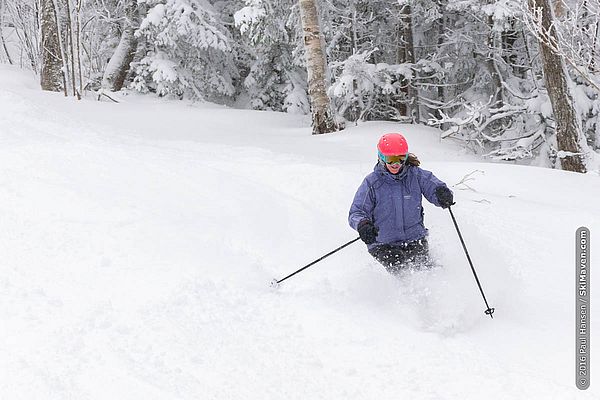 Making turns in the powder at Smuggs this morning. 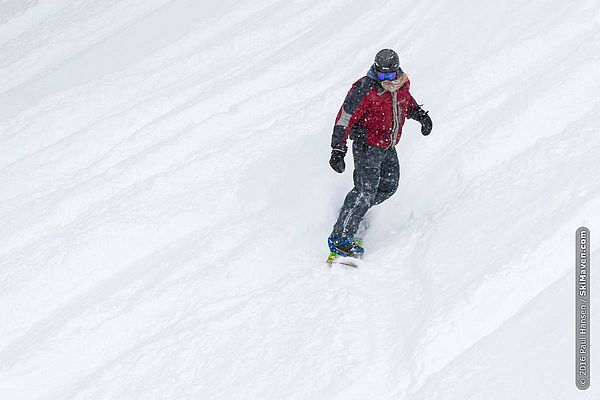 A snowboarder with an epic beard enjoys the fresh snow. 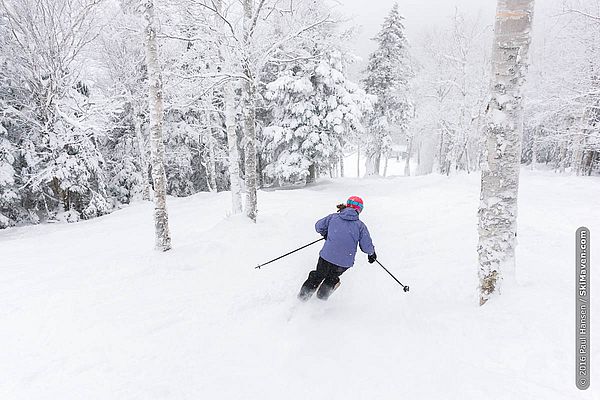 Whee! One of my favorite trails: Doc Dempsey's. 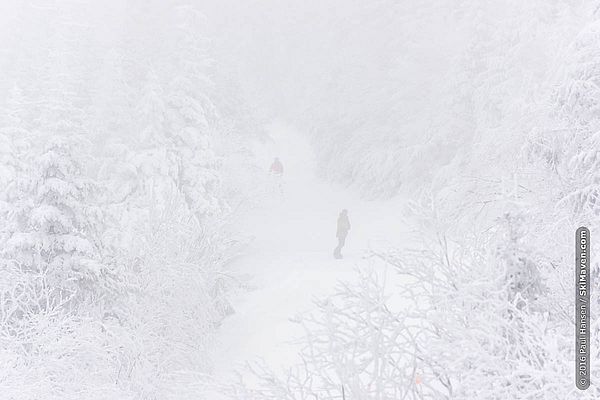 It snowed all morning, and quite heavily early on. View from Madonna chair to Catwalk.

This week’s snow was followed by wind yesterday — and lots of it. So there were a number of closed lifts yesterday due to the wind. And what did that mean? It meant that we might find some untracked snow this morning.

The Skimeister and I jumped in the Subaru and headed for Smugglers’ Notch Resort. When we approached the base lodge to get a ticket, we waded through fluffy powder. This was a good sign.

We booted up and headed for the Madonna I chair, which goes to the highest point of the ski area at 3,640 feet. Our first destination was Upper FIS and lower Doc Dempsey's Glades. While there were large and mostly scoured snowmaking whales in the middle of FIS, the skier's left had collected the wind-blown snow. We enjoyed some powdery turns here before taking the cutover to the spacious glades. Everything was white and it was great fun to move through the trees and the light powder on this all-natural-snow trail.

Smuggs was reporting 6 - 8 inches of snow in the last 24 hours and 14 - 20 in the past three days. Because of the wind there were some scoured off areas on many trails, so you just had to avoid those spots and look to see where that snow landed!

Our later runs included McPherson's, where we enjoyed powder on the sides of the trail. We also had the luck of arriving at the top of Lower Chilcoot soon after it opened. Here we found the deepest powder turns of the morning by alternating between skiers left and right — all the while looking ahead to the next drifts and pockets of snow. Sweet!

It snowed all morning and the Madonna I chair never had a liftline. Yes, this is one of the big perks of skiing midweek when you can swing it!

We also skied off the Sterling double lift where there were a few more skiers on the hill for some reason. We did an old favorite route that included Harvey's Hideaway to Full Nelson. On Harvey's there were rocks and grass showing on this all-natural trail, but I enjoyed powdery bumps on the left side. We skated up to Full Nelson and found it pretty well covered except for the perennial ledge band part way down. Avoid that and the rest was powdery goodness.

Now we need another storm or two to get even more terrain open at the ski areas, and more depth for skiing with confidence in the trees.

As for this morning, I was all smiles. Yay for powder skiing!