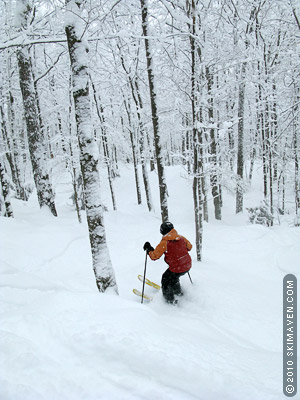 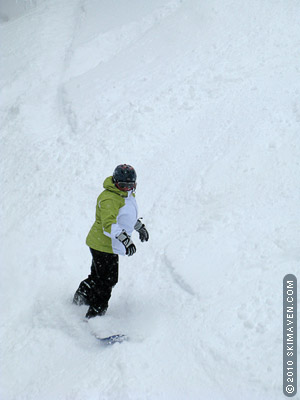 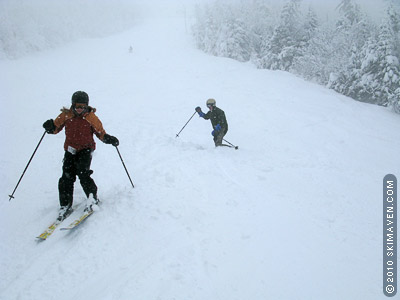 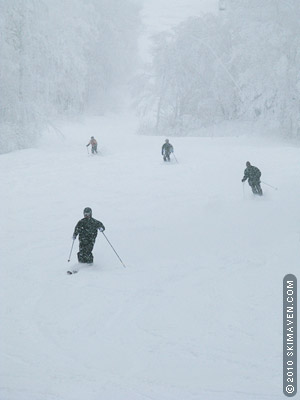 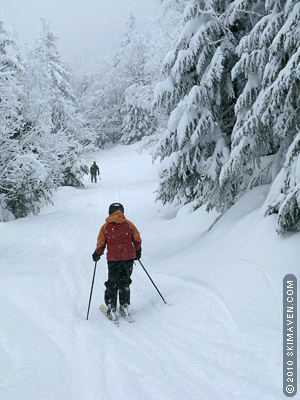 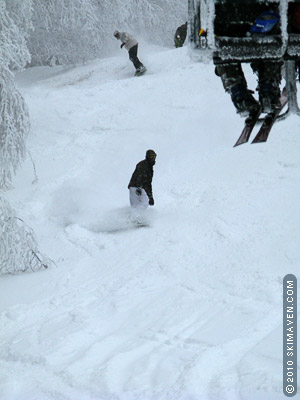 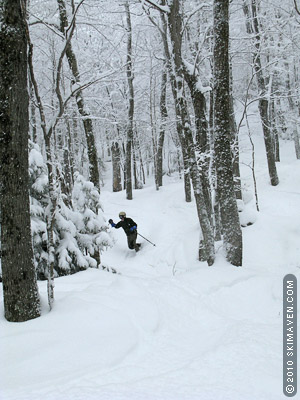 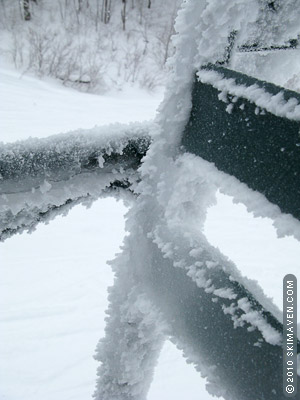 Nearly eight inches. That's my estimate of the depth of the fluffy powder we were skiing in at higher elevations this morning. And we found deeper pockets of powder in some places because it had snowed a couple of times in the last five days or so.

I sincerely thank my friends for making me wake up early this morning to ride some of the first chairs up at Smugglers' Notch!

Let's see...what trails did we have fun on... We hit FIS early because it can be windblown in the center and we wanted to have plenty of snow to ski on the sides. On the edge, there were some bumps with fresh snow filling in between. Then we enjoyed a rather untouched Lower Doc Dempsey's.

Bermuda Glades were really fun and we didn't cross paths with anyone in there. It's a great glade. Getting down to this run on Upper Chilcoot was definitely less enjoyable because the wind had done its scouring work on the center of the trail. Later we found nice powder to play in on Dan's Ford and twice on Father Bob's—just to be sure we thoroughly tested it ;)

Over on Sterling Mountain, we skied in the fresh snow on Pipeline and Treasure Run and then on Harvey's. We liked Harvey's so much we did it twice. Upper Rumrunner was kind of nasty because of that pesky wind. But I stayed to the snowy edge and did short radius turns every time I had to negotiate the trail.

We even did the lower half of the Exhibition trail. You know, the one right under the lift. It still has icy spots on the ledges, but otherwise it was a fun run. I just wish we had done it earlier when my feet were a bit quicker to turn!

The trees and the lifts were all covered in rime. You could hear the trees rustling in the wind. I was told that the Madonna I lift (as well as Stowe's main quad) didn't run yesterday because of the icing. Yikes.

But today, we were really surprised that the lines never grew very long for a weekend day. All the out-of-staters must have been heading home after vacation week. Good for us!

All in all it was a great time on the slopes today. More snow this week???