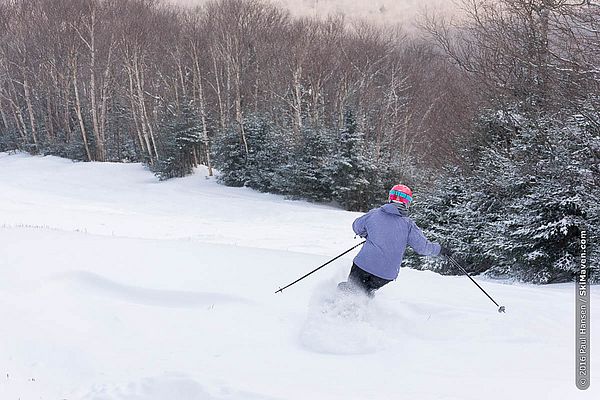 Powdery turns on the Spin Out trail at Sugarbush. 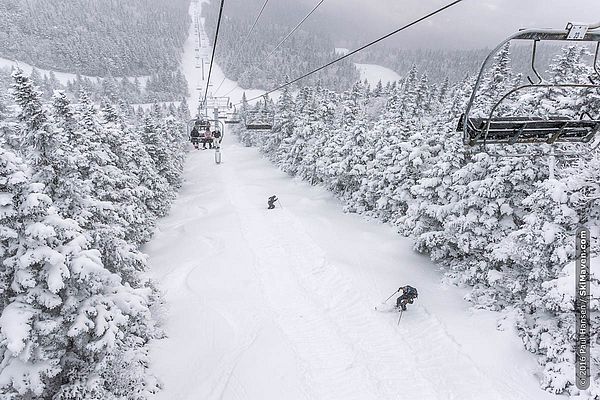 Patrol side-steps and packs down the closed Black Diamond trail to create a base.

Looking up Mt. Ellen's Summit chair. The top was in a cloud. 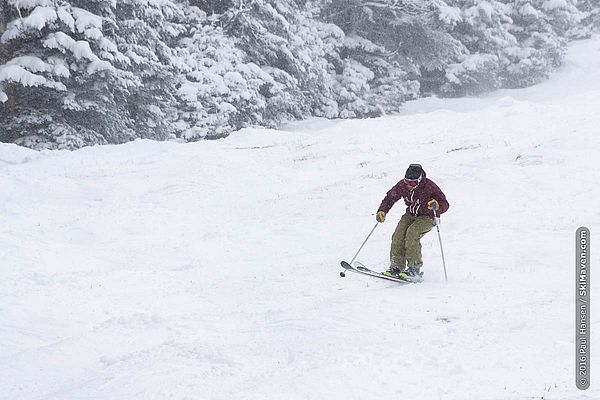 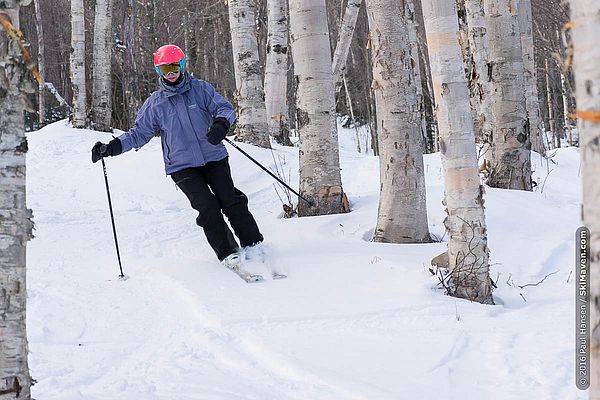 Some pretty birches at the top of Brambles. 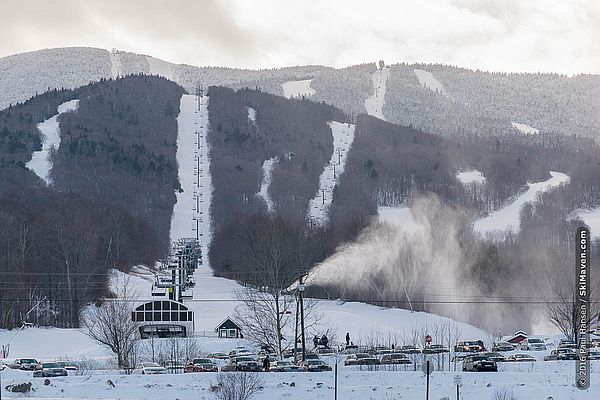 Today we headed over to Mt. Ellen at Sugarbush Resort. We were in search of some soft, powdery snow.

I recalled that Sugarbush was in a snow globe the other day when I checked out their webcams from my office. On today's snow report they said that the summits had received 14" of snow in the previous three days. This was worth investigating.

The Skimeister and I road two lifts to reach the summit of Mt. Ellen (at 4,083 feet) and warmed up on groomed runs: Rim Run and Lookin' Good. We could dip our skis into some powder on the far sides of the latter.

Then we started to explore some of the all-natural snow trails because the recent snow was so light and soft. Of course, there isn't really a base on these trails so you had to be willing to ski over grass and rocks on occasion to earn these powdery turns.

On Exterminator, a number of other skiers had also decided to ignore Thin Cover warning signs in the hopes of skiing soft, natural snow and powder. It was moderately bumped up and there were quite a bit a grassy spots and rocky spots to avoid. But we picked our way down and enjoyed some of the deeper snow at the sides of the trail. Lower Exterminator has less of a pitch to it and the snow there was quite good.

But the deepest and least-touched powder that we found was on Spin Out and Lower FIS. We decided on this route after looking lustfully down at drifted snow on Spin Out. We knew it was a commitment (Lower FIS has a long, flat runout). We pushed off anyways.

We found our deepest turns on these rarely skied trails. Yes, these natural snow trails included grasses and rocks and not-yet-filled in water bars across the trail, but they were fun! The fun turned into an adventure as Lower FIS turned into a runout trail. This was the Nordic component of our day as we had to skate ski. And we had to jump over, step over or ski around small, open streams. We felt like we were in a remote area of the woods and that we could see a moose any moment. No luck on that one.

Later we went back to some trails with a solid snowmaking base, such as Lower Rim Run and Elbow. But we ended our day by exploring again. We took Northway over to the Inverness area and skied down Brambles, which was mostly natural snow. (They're doing big-time snowmaking next door on the Inverness trail so some of that snow had blown over.) It was fun seeking out powdery turns, and being able to ski right up to the chairlift (no lines!) was a bonus!

We finished our day with inventive, gourmet pizza and Vermont brews at Blue Stone in Waterbury, Vermont. (We had a Jump On It coupon.) A sweet deal all around.