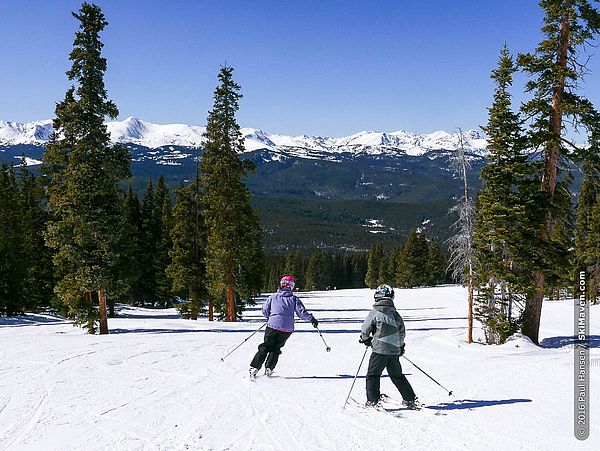 Sunny turns atop the Trails End trail at Cooper ski area in Colorado. 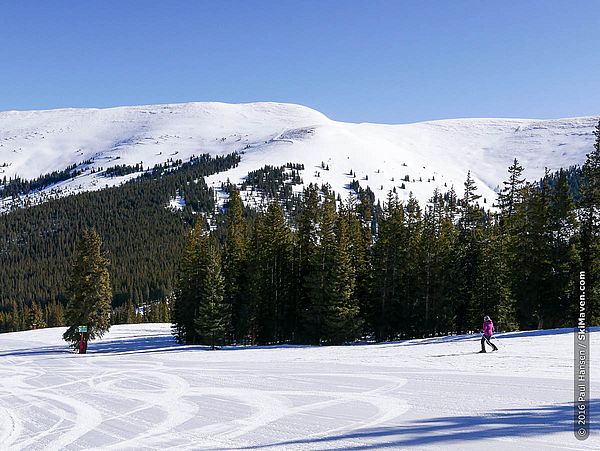 View of Chicago Ridge from the “back side” of Cooper. Many telemark skiers here. 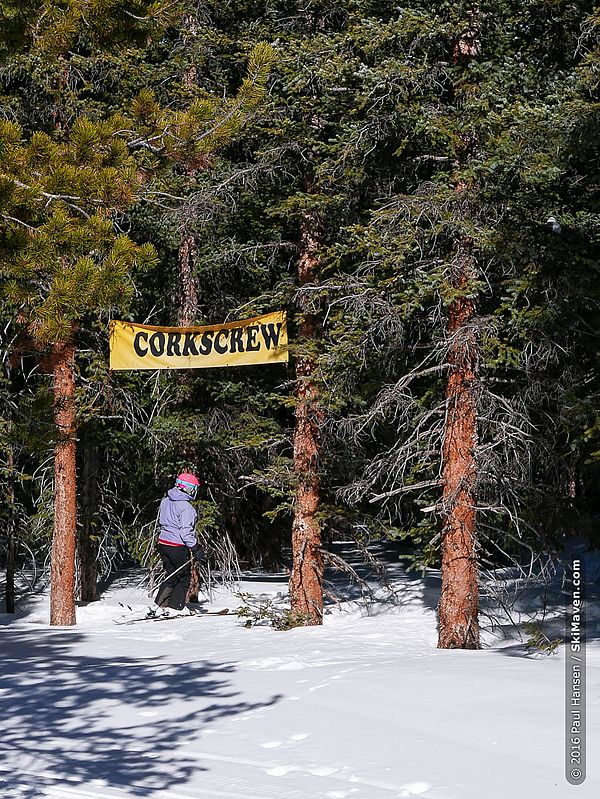 Entering the tight trees in Corkscrew. 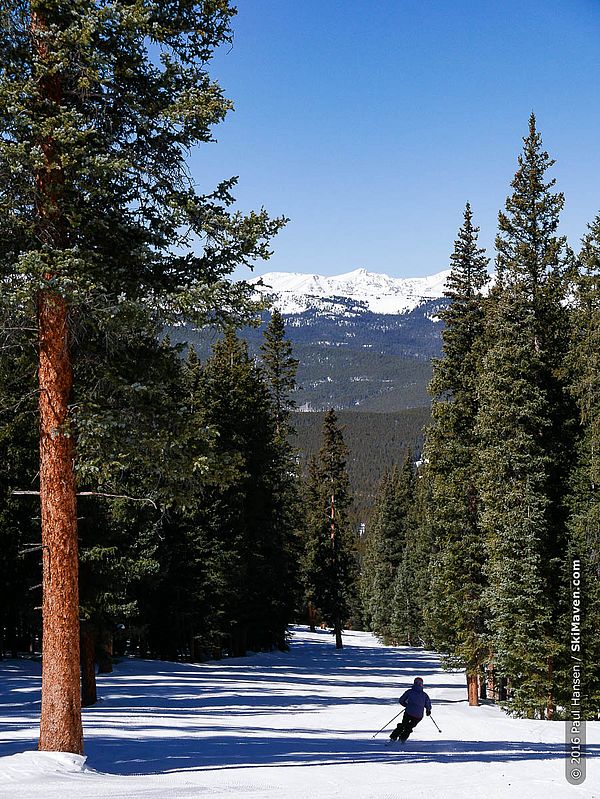 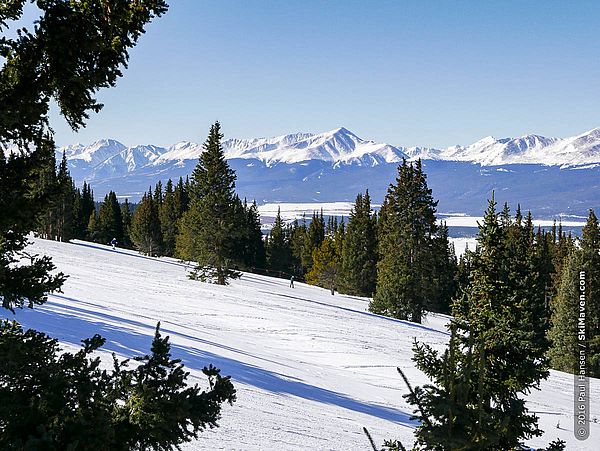 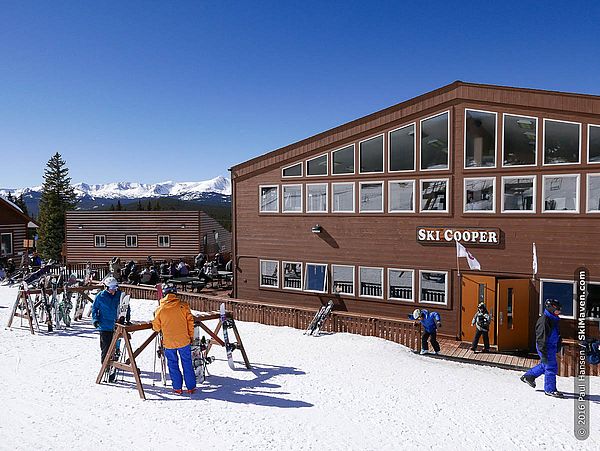 Cooper's base lodge includes a sunny deck and a tiny Irish pub.

No, not Copper Mountain, but rather Cooper ski area near Leadville, Colorado, America's highest little city. You can get to Cooper from I-70 by taking one of two highways that go around Copper and Vail resorts. We drove Route 24 from Minturn, Colorado — a cliff-hugging route that I would not drive if there was snow on the road.

After a bunch of switchbacks and 21 scenic miles, we arrived at the sunny slopes of Cooper. We had passed this place before in the summertime and we knew that Cooper only had a couple of lifts and 1200' vertical, but we were curious about this mountain perched high in the hills. (The base is at 10,500'.) The thing that got us to drive over to try it was dirt-cheap ticket deals. On Tuesdays you can ski two-for-$50; on Thursdays everyone skis for $30. After skiing a couple of nearby mega-resorts during the week, this was a nice, mellow change of pace for a day.

We booted up and put on sunscreen for this bluebird day. Then up we went on the long 10th Mountain Double Chair. This lift services the “front side” of the ski area, which has a mix of trails of all ability levels. The wide intermediate trails were framed by tall, red pine trees and had ample corduroy through the end of the day.

But we skied mostly on the “back side,” which has the Piney Basin Triple Chair. Here we found a mix of trail levels, but we had fun in the tree runs — and in the trees between the trails, where the snow was still quite powdery despite a stretch of springlike weather at lower elevations. Powder Keg was among our favorite runs, which also included Homestake, Motherlode and Timberbash. All brought us through the tall, shady trees. We hadn't seen much fresh snow during our Colorado visit so shade was our friend for the “old” snow.

Corkscrew was another tree run but it was like a luge track in many places. We also liked making up our own routes down the hill by cutting through sections of trees that separated the wide trails. At Cooper they were nice enough to not groom the entire width of many trails so you could move between windblown powder to corduroy on a whim. It also meant that on the steeper trails you could ski bumps on one side and corduroy on the other.

We spent much of the day playing around on the back side of Cooper, which topped out at 11,700 feet. Yeah, pretty darn high! There was very light skier traffic during the midweek and we remarked how powder stashes might last for days at this ski area.

Have I mentioned the views? Chicago Ridge looms large to the north and east. We saw a couple of skiers skinning up for turns on this mostly treeless ridge. We also saw one of Cooper's snowcats bringing skiers out for an out-of-bounds skiing experience on the ridge. (This costs much more than Cooper's regular tickets.) To the south and west, the Sawatch Range — including Mt. Elbert, Colorado's highest peak — formed a long chain of snowy peaks set against a bright blue sky. Fantastic!

Hunger pangs and thirst brought us back to the front side of the ski area. We enjoyed fast, long turns down the Homestake trail and tucked into our sandwiches in the small but tidy base lodge.

After lunch we headed back out on the sunny mountain. It's a round-topped mountain so we were always soaking up the sun. Also, most trails are not very steep. The blues are more like greens at other ski areas. The black runs are what we'd call blue runs with either bumps or trees on them.

We skied a bit more on the back side (Kamikazee, Blarney's Stone and Ambush were fun), but then turned to explore a couple more tails on the front side. Power Line, true to its name, followed a narrow powerline and featured bumps, with trees close by on the left and right. Trails End was a nice long cruiser with tall, thick pine trees on both sides of the trail — plus a stunning view of the Sawatch peaks. This run was a great way to end the day.

Cooper is old-school — and judging from my cursory review of the ski racks, some folks ski on skinny, old-school equipment. It's a small, sunny and laid-back ski area that is the antithesis of nearby mega-resorts. Cooper isn't steep and it made for a very low-key, inexpensive ski day during a busy Colorado ski trip.