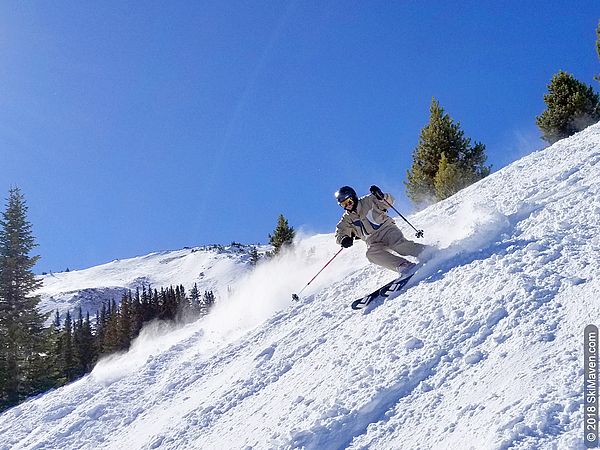 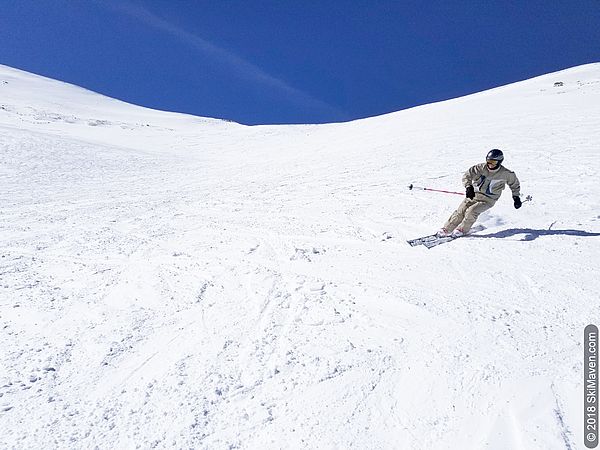 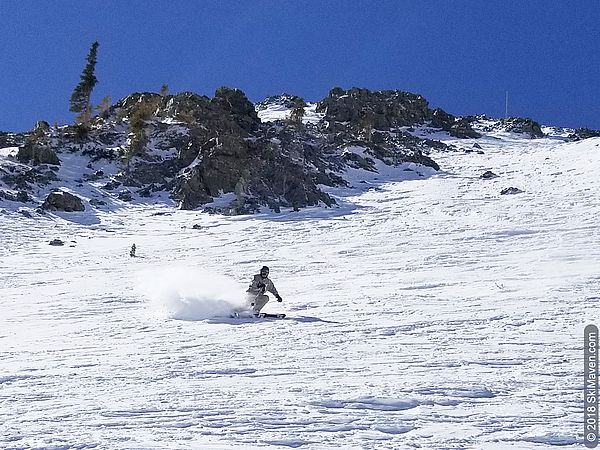 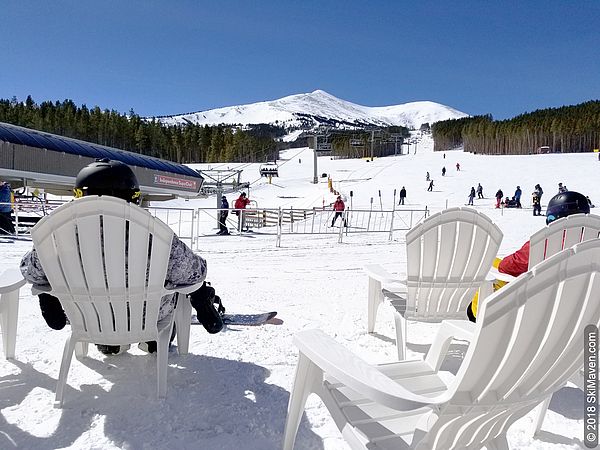 Yes, it’s true: This is not a skiing post about Vermont. We went to Colorado last week!

While Colorado is not having an epic winter by any means, it was still wonderful to ski in a little fresh snow and bright sunshine on the slopes of Breckenridge Ski Resort, Colorado.

I hadn’t skied at Breckenridge for years. The Skimeister had never set foot on the resort. We used public transportation to get to Frisco, Colorado, and then over to the town of Breckenridge. At the bus terminal, we took a few steps to ride the Breck Connect Gondola up to the Peak 8 base area. There we found lockers and lots of seating. We would make this our base area for our two days on the mountain.

Breckenridge is divided into five peaks. They are numbered Peak 6 (when you look up at the mountain, this is furthest to the right or north) to Peak 10 (furthest to the left or south).

Each peak has its own feel and appeal. Our favorites were the very top of Peaks 6, 7 and 8. Here the skiing was above treeline. Open bowls funneled down into runs with sparse trees. Below this were broad Colorado ski trails lined with tall evergreens or aspens.

On the morning that we arrived the resort was reporting three inches of new snow. However, it came in with a lot of wind from the west so with luck you could find filled-in areas with snow that was much deeper. Luckily the snow was not very windslabbed so it was fun to make turns up high on the mountain!

The Skimeister enjoyed skiing the bowls off of the highest chairlift in North America: the Imperial Express on Peak 8. It ascends to 12,840 feet and you can hike up to the 12,998-foot summit. At this elevation it was a challenge to hike, but the Skimeister did it anyways. He traversed and enjoyed snowy runs in the steep Lake Chutes. Whale’s Tail and Peak 7 Bowl can be accessed by traversing right off the chair, and were also in surprisingly good shape.

Both of us enjoyed skiing off the Horseshoe Bowl T-Bar on the shoulder of Peak 8 (Boy, I haven’t been on a T-bar for a while!) Over on Peak 6, we traversed across a bowl to get fresh tracks on Intuition and Breathless. There isn’t a huge base of snow here and the wind scoured some areas, so you had to keep your eyes out for rocky, scoured areas.

The above-treeline bowl skiing that you hike or traverse to is challenging and sometimes extreme. It can include rocks and cliffs. And this is in-bounds terrain. It at times reminded us of some skiing at Alta and Snowbird.

In addition to these snowy bowls, we enjoyed skiing off Chair 6; it’s a double chair near the top of Peak 8. We liked weaving through the trees and getting powdery turns. The only difficult part were the faces that had soaked in the sun in previous weeks. They had gotten rutted before freezing up. So under the fresh snow you would suddenly come across crunchy stuff under foot. Still, the snowy turns at the top and bottom of these runs made it worthwhile.

There were plenty of bumps to ski if you wanted to. They tended to be rather hard bumps because of recent warm weather followed by cold temperatures. But I hit some up after skiing through the snowy trees on The Burn on Peak 10.

Lower on Brekenridge’s peaks, skiers and riders zoom down many wide, groomed runs. Lodges and warming huts are sprinkled around the resort. This lets you pack some food in your coat or backpack and stop for a snack and water anywhere you want – whether you are on Peak 6 or Peak 10.

Both of our ski days featured Colorado bluebird skies. So nice! Our first day delivered wind that made us glad to have balaclavas on – despite the rather balmy temps down in the village. The wind died down a bit on the second day.

Breckenridge delivered on the apres ski front, as well. On day one, we grabbed a beer at the bustling little bar attached to the Rocky Mountain Underground ski shop. Then we found cheesy, satisfying pizza at Giampietro Pizzaria. Both are on (or just off of) Main Street. The second day we grabbed a tasty appetizer and beer at Canteen before heading for the bus station, which was nearby.

We really enjoyed skiing at Breckenridge. It was great to get to know it after so many years!

Breckenridge Ski Resort at a Glance