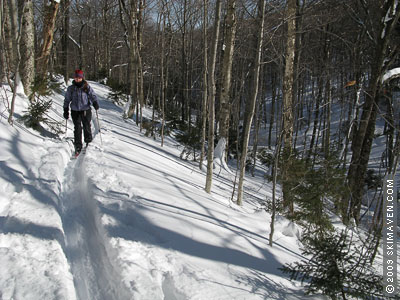 Climbing up the Burt Trail. 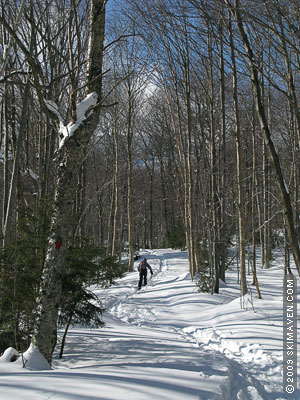 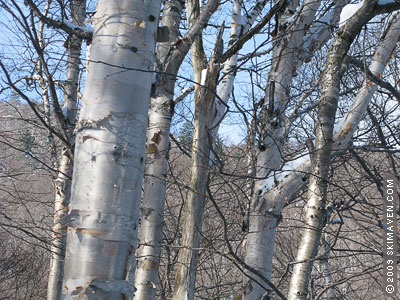 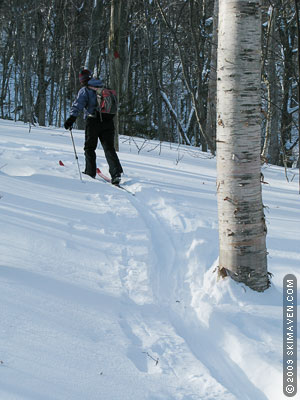 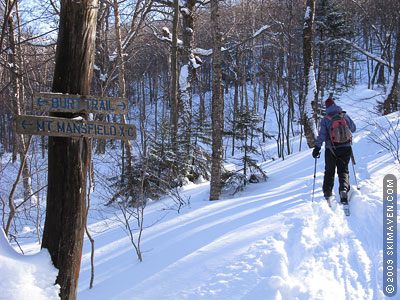 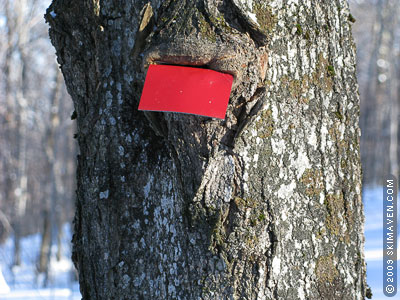 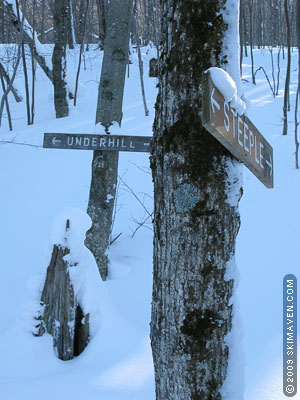 Arriving at the Steeple Trail for a fun descent. 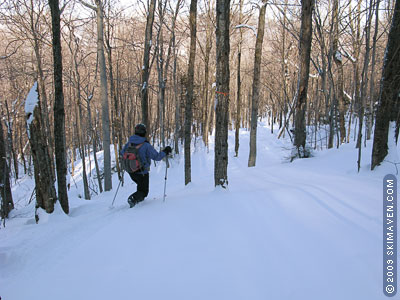 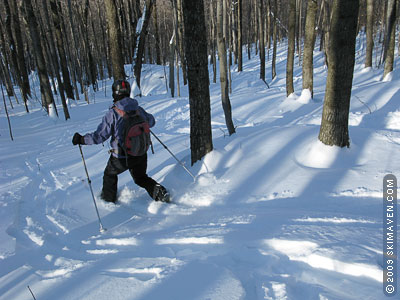 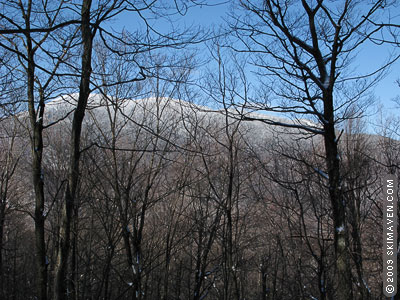 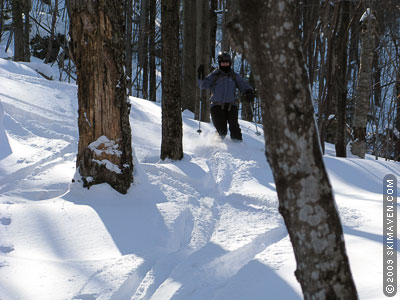 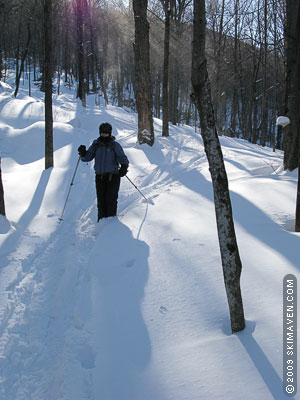 Saturday dawned with clear, sunny skies and the Skimeister and I cemented our plans for the day over breakfast. Despite the expected drop in temperatures during the day, we would head over to Stowe, Vt., to tackle the lower Steeple trail. It would my first time on this backcountry skiing terrain to the west of the Stowe Mountain Resort nordic center, and to the south of Mt. Mansfield. It's a historic Vermont trail that I had read about in David Goodman's "Backcountry Skiing Adventures" book, and I was eager to try it.

The trail had been cut back in 1937, when skiers would venture out to a rustic woods cabin called Ranch Camp to ski this trail and the Bruce Trail up Mt. Mansfield. The Steeple trail eventually was taken over by trees and disappeared over the years, but the late director of the Mt. Mansfield cross country center and his colleagues found and recut the trail in the 1990s. Now it's a fun skiing adventure available to anyone who wants to put the effort into climbing to the top of the trail.

And much effort it was, as I discovered. Instead of skinning straight up the Steeple trail, we selected a route that would take us from the Stowe Mountain nordic center on the groomed Burt Trail. As we neared Bear Run, we turned left to climb up the ungroomed section of the Burt Trail. Kicker skins (covering half the length of your skis) would have been nice here in some sections, but I made it through with enough grip from my waxless skis and the super-cold snow.

By the time we closed in on the Underhill Trail, I was getting tired and was quite pleased to see the trail sign. The Underhill Trail would contour along under the Skytop Ridge to bring us to the Steeple Trail. The Skimeister broke trail here as no one had skied the Underhill Trail for a couple of days, it seemed. There were fresh tracks up to the top section of the Burt Trail to the Skytop Trail, but it would have been a blustery, cold ski on this day, when the wind whipped through and the temperatures hovered around 0 degrees.

It was windy and cold enough that we had to wear our balaclavas on the way up the hill--despite all the heat our bodies were generating. The cold also started to freeze my water bottle and the cream cheese on my bagel, which was stowed in my pocket. Good thing I was using my large-mouth water bottle, which I put into my pack upside-down so that the ice would not form at the mouth of the bottle. That would not be a pleasant surprise; I was not drinking enough water as it was because it was too cold to stop for more than two minutes.

By the time we made it to the Steeple Trail, I was ready for my well-earned descent. We passed the Upper Steeple Cut-Off first, and that looked very tempting. But I wanted to ski the proper Steeple trail, so we moved on. I could soon make out a wooden sign that hailed our arrival at Steeple, and I was more than happy to stop, strap on my helmet and cinch up my powder skirt and mittens.

The gladed trail had fun twists, turns and dips. Although, it needed some more snow to fill in the dips of the several small brooks that crossed the trail. We had to keep our eyes open so we could cross these areas without incident.

We had plenty of snow to ski through but it was older snow so it was a bit windpacked and heavy. This made it challenging for me on my lighter backcountry gear, but I enjoyed practicing my telemark turns anyways. This trail would be a blast on a powder day.

While the upper third of the Steeple trail is for experts, the lower Steeple is an intermediate kind of trail. There was one steep-ish pitch and I avoided it by heading to skier's right and around a large boulder, where I could make fresh tracks among the hardwood trees.

The Steeple Trail dumps out on the Dewey Trail and then the Burt Trail, to bring you back to civilization. The Burt Trail was humming with snowboarders and skiers exiting the Bruce Trail off of Mt. Mansfield. The traffic was kind of rediculous. These folks had enjoyed a ride up Mansfield on the high-speed quad to enjoy the Bruce Trail, which seems to be much more heavily used than in years past.

The route that the Skimeister and I took was rather grueling for me. My legs were pretty spent by the time I put on my helmet for the downhill fun. When I return, I'd try climbing up the Dewey trail and one of the Steeple Cut-Off trails. The Upper Cut-Off takes you to just below the harrowing headwall on upper Steeple. (This is the section that I knew I would not be able to ski well in my backcountry gear. If I had my alpine gear on, that would be an all-together different story!)

Alternatively, I would try climbing up the Ranch Camp and Old Camp Trails toward the Trapp Family nordic center. Then I'd cut back on the Underhill Trail to again enter below the upper Steeple headwall. This season or next I want to tackle the Skytop Trail, as well. It's a longer ski tour, but I understand the views are amazing. You can reach Skytop from the Mt. Mansfield or Trapp nordic centers.

We really earned our turns today, as well as a delicious burger and Shed beer in the pub at The Shed on Stowe's Mountain Road. This bar and restaurant has been a mainstay for Stowe skiers for years. The Matterhorn bar looked packed, as well, as we left the cross-country center around 3 p.m. But our sights were set on a locally brewed beer and a juicy burger, so we were more than happy to defrost ourselves in The Shed.