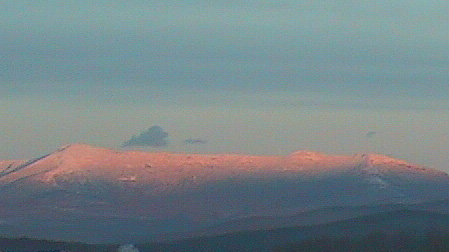 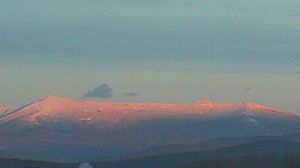 What a combination: a snowy Mt. Mansfield and the glow of a setting sun. The mountain was pink this afternoon as the sun set. The photo is from a Web cam that is positioned at Burlington International Airport, looking east.

All this snow and cold weather gets me in the mood for skiing. Going to the Warren Miller film last night doesn't hurt, either! They had some fun skiing sequences from Iceland (wow, what a unique place!), Crested Butte, Japan, Alaska and even a little bit of Vermont. They showed some groomed runs at Okemo and some musicians snowboarding down. Not very exciting. I'd rather have seen some pro skiers in the glades in some of last season's amazing snow! I guess that didn't fit into the "story line" if there was one.

Did you know that Warren Miller actually sold his company about 20 years ago? I believe Time Warner now owns it. Jonny Mosely (you know, Olympian bumper, 360 mute grab) was the movie's narrator this year and last.

Anyways, with all this in mind I finally ordered my very own pair of climbing skins. No more begging and borrowing. With these skins and the Scarpa T4 light telemark boots that I picked up on consignment, I'm feeling better equipped for skiing in the backcountry this year.

I'm really looking forward to skiing after Thanksgiving! But first, I must make pies...