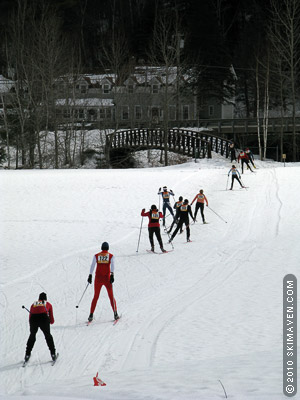 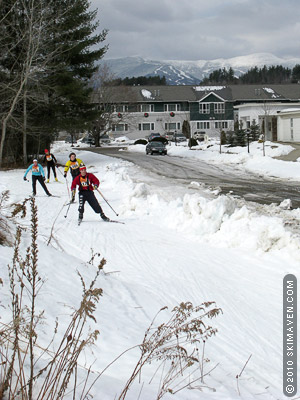 They made their way down from the mountain and into town. 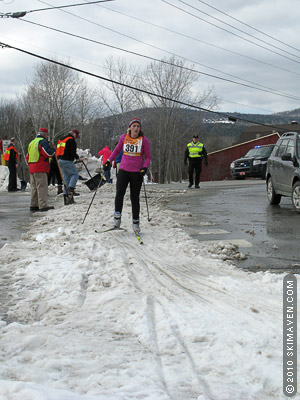 Crossing traffic along the way. 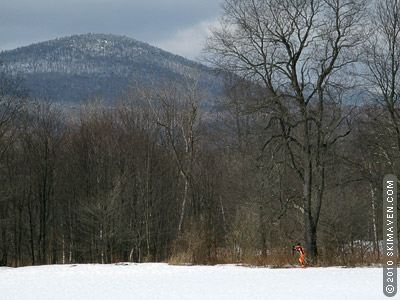 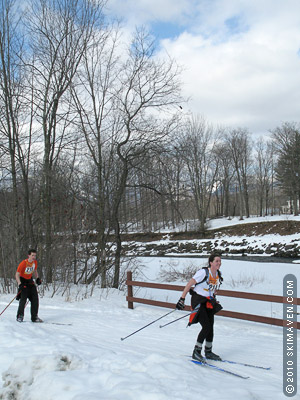 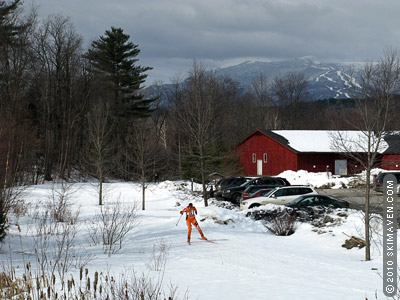 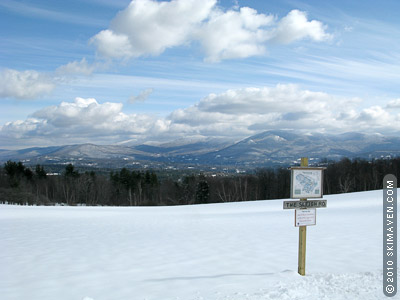 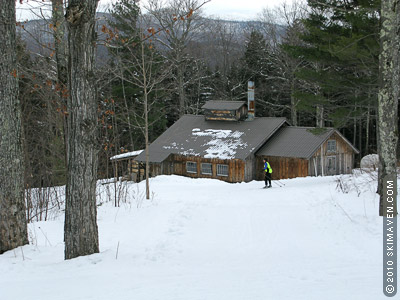 Zipping past the Trapp sugarhouse.

What a gorgeous day it turned out to be in Stowe, Vermont, today. I headed to Stowe with two goals in mind: check out some of the 2010 Stowe Derby race action and then take a ski myself.

The 16km race course starts atop Mt. Mansfield and wends its way down into town to follow the recreation path all the way to the church in Stowe Village. Just think — most skiers do all this on skinny skis.

It was fun to see how they actually got people through the course — having to cross a couple busy roads in order to do so. Volunteers shoveled snow onto the road crossings and let cars go through when there were gaps between racers. Then they'd shovel some more snow on the track for the next racers.

I saw racers of all ages and proficiencies. It was nice to see that this was not just an event for hard-core athletes; all kinds of folks took part in this longtime tradition now in its 65th year.

Congratulations to overall winner Eli Enman of Huntington, Vt. He finished the course in just over 43 minutes. Wow.

I felt kind of guilty watching some of the later racers with a coffee in one hand and a muffin in the other (hey, it was lunch time). So I then headed out for my own aerobic workout on the cross-country trails of the Trapp Family Lodge.

The snow was soft, as it had been in town as well, so I would have needed Klister wax on my classic skis. I opted for my skate skis instead. I enjoyed a nice intermediate loop starting on the other side of the road from the lodge and nordic center.

I zipped down Sleigh Road to Aither Trail. In the shade of the woods the snow was not quite as soft as it was in the open fields. I crossed the road and waltz on over to Skater's Waltz, which started a long, gradual climb up toward the lodge.

Since I started after noon, and I took less-traveled trails, I didn't pass very many people. I think I saw more crows than people. It was so nice to be in the woods away from everything. The snow coverage was very good and the warm temperatures and soft snow made skating a bit slow.

At the next intersection, I headed up Deer Pond Trail and eventually I veered off to pass the sugarhouse (they actually boil sap there in the spring). Speaking of spring, I noticed some tiny snow fleas today on the surface of the snow!

I passed Trapp's small fishing pond and did a steep climb to get back to the height of the nordic center. Back up at this elevation I got to enjoy the views of the nearby snow-encrusted mountains again. It was a great day to be outside.

One sad note to report: the Stowe Coffeehouse in Stowe Village is closed. Kaput. Gone.

No more maple lattes for me. Sigh.