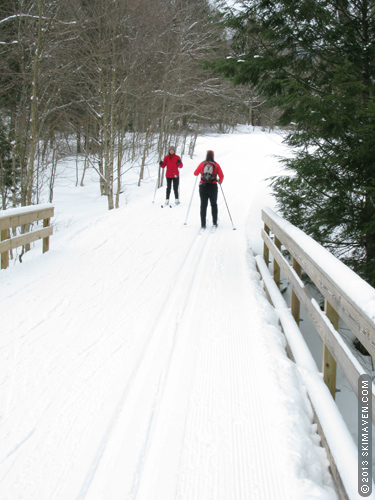 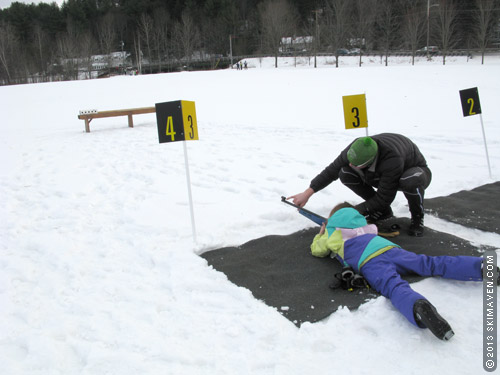 A young girl tries her hand at a laser biathlon gun. (Fun!)

We have had a Stowe kind of week. The two biggest Nordic centers in Stowe held on to much of their snow after last week's thaw, so we ended up skiing there again on Saturday.

My friend and I enjoyed a loop at the Mt. Mansfield (Stowe Mountain Resort) Cross-Country Center. We made use of a Catamount Trail Association coupon for two-for-one skiing in the afternoon. (Gotta love that member coupon book!)

Stowe had received 2 - 3 inches of fresh snow Friday night into Saturday morning, so the conditions were very nice. The resort had set tidy classic tracks and swaths of corduroy, and we even saw them grooming while we were on the trails.

I love skiing alongside the partly frozen river here, so we started our tour with a steep downhill on a small segment of the Stowe Derby Trail to get to the beginning of the Burt Trail. Then we skied up the Burt Trail as it followed the contours of Ranch Brook. It's a great spot!

We kept noting how pretty it was in the woods. At lower elevations, a lot of snow has melted, so it felt like we had stepped through a winter portal when we slid into the woods.

Quite a few people were enjoying the trails, but it was far less crowded than the downhill slopes on this holiday weekend. Arriving in the afternoon also made for quieter trails.

We climbed up Burt to Bear Run, and then returned to the lodge via Timberlane, which had some fun downhills.

On Sunday, some wild weather moved into Vermont. Nasty snow/sleet squalls pushed their way through along with crazy wind. Ski areas were reporting lift holds due to strong gusts. Bolton Valley even reported thunder and lightning! Yikes!

The Skimeister and I attended the Stowe Tour de Snow and even along the recreation path the wind was howling. Luckily, after an initial squall that had the snow flying sideways, the sun came out to help keep us warm.

It was great to see a variety of skiers — young and old — participating in the fun. One busy area on the Tour de Snow route featured an adaptive skiing session with NENSA and NDAA, as well as a biathlon shooting station (with laser guns) with the Vermont Guard. That was fun to try!

You can't go to Stowe without doing some après ski, so I just had to partake on both days. On Saturday, my friend and I enjoyed locally sourced burgers and beer in the tavern at Crop on the Mountain Road. On Sunday, we moved just one door down to have yummy pizza slices at Piecasso.

Now, it's back to work on Monday as the mercury plummets for the coming week. Stay warm, everyone!