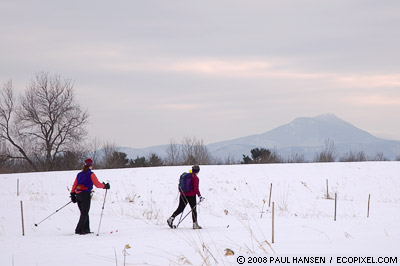 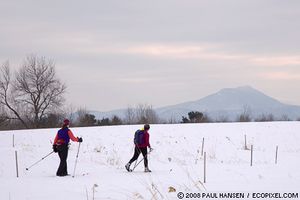 Who says you can't get something for nothing?

Just this afternoon I was able to ski for free at Catamount touring center because I accompanied a <link http: www.catamountoutdoor.com external-link-new-window external link in new>Catamount center member. They offer this once a month as a membership perk. Sweet!

So off we went on the cross-country trails on the south side of the center. Today was in the low 40s here in Burlington and Williston, so wax-less skis were the order of the day. We had enough kick to move us along, but the downhills were pretty slow because of the sticky snow. Still, it was a good afternoon to get out and get the blood pumping.

I was just in fleece and I took off my mittens part way into the short ski tour. It felt like spring skiing, and yet it's only January 6!

Now it's sounding like we'll have some rain down here in the Burlington area this week (rats!), before snow for the coming weekend.

It was nice to see families out on the trails. In fact the parking lot was nearly full. Most people were doing nordic skiing, while some were snowshoeing. Others had taken to the sledding hill and were sending up hoots and hollers.