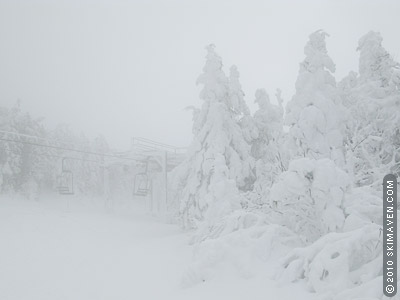 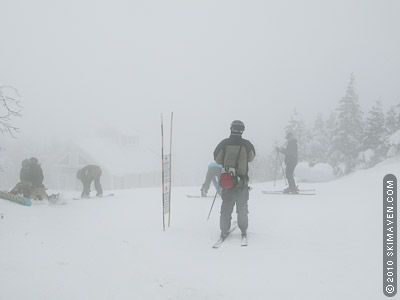 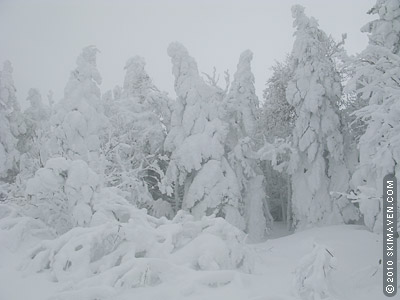 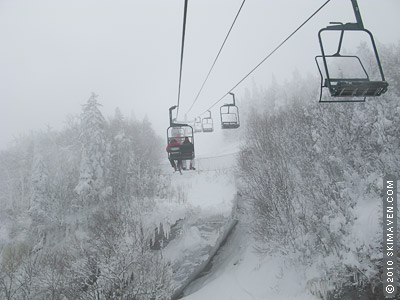 I had a couple of hours to ski with a friend this morning at Smugglers' Notch. I knew it would be a rather warm day and was hoping (naively) for some sun.

Well, no sun but we skied on some nice, soft snow. I enjoyed the runs that had bumped up, including Harvey's, Full Nelson, Lower Doc Dempsey's and the edges of FIS and Treasure Run.

And I felt like a hero arcing some turns on the groomed corduroy. Father Bob's and Lower Exhibition were some of the best places to do that.

The trees on the upper parts of the mountain were coated heavily with snow and then weighed down with some moisture. Their tops were tilting as if they were bowing to us as we road the lift. It looked as if someone had much too generously spackled the trees. In fact, we saw some trees that had snapped off their tops because of the weight of the snow.

You had to be a bit hardy today because of the weather. The snow was so good that we persevered through freezing drizzle, glazed coats and pants, and low visibility. We had to wipe down our goggles a couple of times each run and at some of the higher elevations it was so soupy that it was like we were skiing by braille.

After our last run I remarked that we looked like a couple of glazed donuts! But we were pretty happy donuts after a morning of skiing. And anyways, I like glazed donuts.