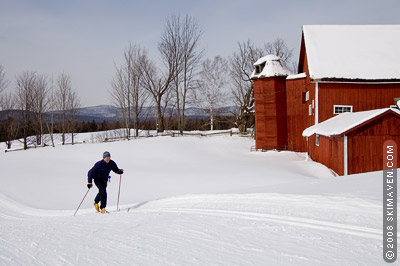 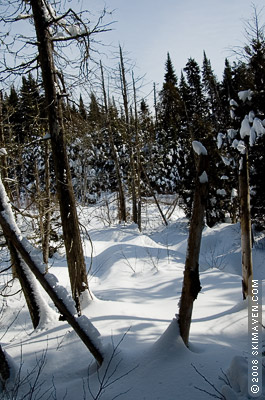 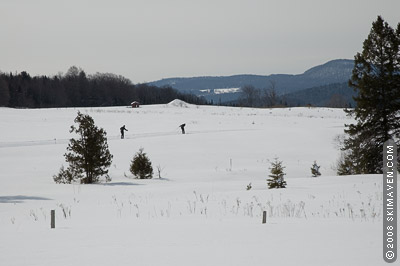 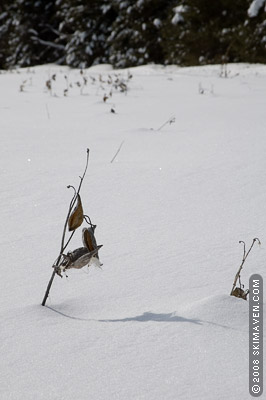 Sunday morning brought more blue skies to Craftsbury, Vt., and cold temperatures at 7 in the morning. By the time we had breakfast and gathered our gear, however, things were warming up nicely. I could tell this was going to be a good ski at the Craftsbury Nordic Center.

I had been to Craftsbury once before. Over the course of two days last year, we had hit most of the trails from Ruthie's Run Extension in the northeast, to the Grand Tour trail to the southwest. I remembered enjoying a ski along the meandering Black River and also behind the classic white-painted homes and Sterling College buildings on picturesque Craftsbury Common. When you are up high near the Common, you get some broad views of the surrounding hills and mountains.

But this morning, with just a couple of hours to ski, I set my sights on Sam's Run to the east and I packed my camera. The Skimeister wanted to do some fast cruising, so he took off early to ski from Craftsbury Village up behind the Common all the way to the Nordic Center.

The Grand Tour trail took him across Little Hosmer Lake, which he said was blustery but fun, and also cut across the bottom of Big Hosmer Lake. This is the lake where they do a lot of the rowing training camps that Craftsbury is also known for.

Skimeister caught up with me after I had stopped to photograph a snowy overlook of the swamp that straddles the upper section of the Black River. On the 8.3km Sam's Run I had climbed through the woods, crossed open fields, dipped back into the trees and then turned north to parallel the frozen swamp and river.

We climbed to the touring center together and ate our lunch in the newly renovated building. (Nice improvement!) Later we would zip over to Murphy's field which is located next to a lovely red Vermont barn. Photo opp!

Craftsbury is a busier cross-country skiing center than neighboring Highland Lodge, and Craftsbury's trails and tracks are meticulously manicured. They also have a great rental fleet. I got to ski on skinny, waxless classic Rossignols that looked brand new. It was a treat to glide along smoothly on Sam's Run. I might just have to buy those skis to replace the skis I normally use!

At Craftsbury, nordic skiing is serious business for some. There are quite a few hot skiers here sharing the trails with families and cruisers like myself. I saw someone in a Dartmouth ski team jacket buzz by me. But there were also young children from around New England who were training here with their hometown coaches, and other kids skating on the small pond by the nordic center. Dorm and cottage-style housing is available to large and small ski groups.

So you get a different feel at the sporty Craftsbury center and the laid-back Highland Lodge (<link post highland-lodge-beautiful-high-meadows-and-views external-link-new-window external link in new>check out my post about the high vistas at Highland). There is a long connector trail that bridges the two centers. But they both boast some extremely scenic trails and quiet, grand loops that make you glad that you decided to spend a ski weekend in northern Vermont.

CRAFTSBURY NORDIC CENTER AT A GLANCE