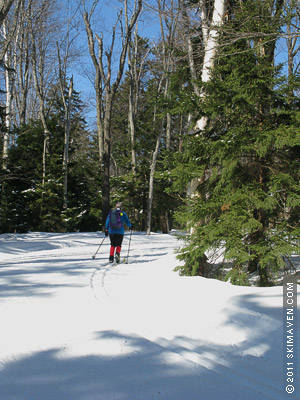 Making our way up Parizo toward the cabin. 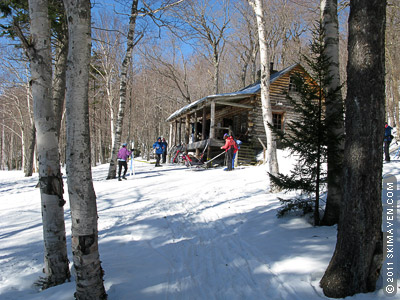 The cabin was a busy place in the early afternoon. 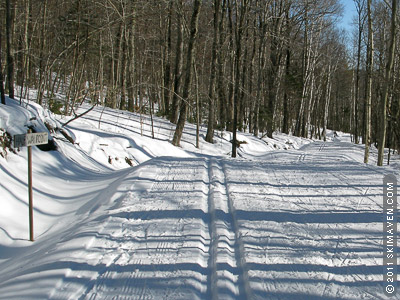 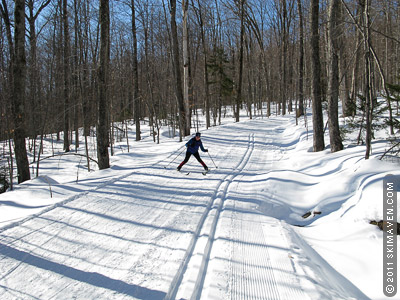 ...where wide snowplows were essential! 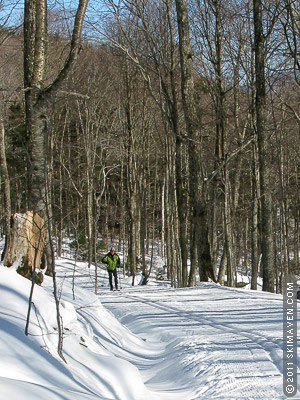 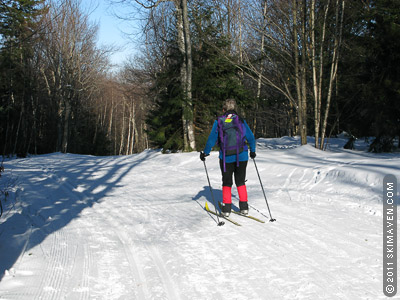 Reaching the crest of the Telemark Trail. 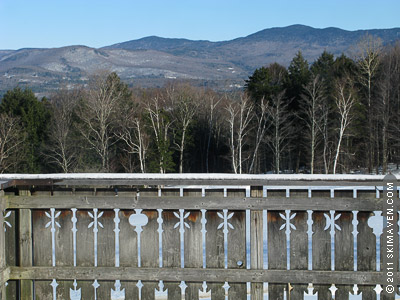 Views of the Worcester Range.

Some liquid refreshment. It's hard work, you know!

I slathered on sunscreen, put on a headband and sunglasses, and took off on an afternoon ski at Trapp Family Lodge's cross-country trails in Stowe, Vt. Sun and blue skies have been the norm for a couple of days, and today's warmer temperatures made it just heavenly for skiing.

My friend and I donned our classic skis and headed out under the early afternoon sun onto the Sugar Road trail. We would climb up and up Parizo Trail to the cabin. What's nice about Parizo is it's actually two slopes; it has a one-way trail up and one-way trail down. You don't have to keep your eyes peeled for skiers zipping toward you. You can just concentrate on getting kick and making your way up the rather steep hill.

When we skied through sunny spots on the trails, we noticed that our kick wax didn't work as well as when we were on the snow that stayed cool in the shade of the trees. After sliding on the Cabin Trail for a bit, our 5 km of uphill effort was rewarded with a short stop at the cabin, which is tucked in the woods at 2,100 feet in elevation. I enjoyed a hot chocolate and we chit-chatted with a friend who happened to be skiing with her kids that afternoon. The chickadees and finches were going wild over the birdfeed that the cabin staff put out for them.

Next stop: the 40-Year Trail. My friend hadn't skied at Trapps for years so she was interested in trying this new trail. I hadn't skied the trail for two years, so I couldn't quite remember what it was like.

After a rather mellow start, it soon became clear that this was going to be an exhilerating 2.5 km downhill run! We made wide snowplows with our skinny classic skis and zoomed down the hill and around banked turns. (Really, some of them were banked!) We had to stop now and then just to break our momentum for the next pitch.

In no time at all we came upon a sign that indicated that we were at the half-way point of the trail. We laughed and caught our breath before zooming down the trail again. The grooming and tracks were terrific, but we were usually going too fast to stay in the track on this trail.

We then intersected with the Russel Knoll Trail and passed a logging area — again at high speed! — before doing some climbing to arrive at Picnic Knoll. We pointed our skis onto the Sugar Road and then the Telemark Trail.

All of the trails we had been on thus far were rated intermediate (blue). The 2-km-long Telemark was rated beginner (green), but I'd say it's a light blue. We climbed up a ways before again enjoying a downhill run that wasn't as fast-paced as the 40-Year Trail. Nearly every skier we passed had a smile on their face. A few remarked at how wonderful the day was, and we had to agree.

Instead of returning to the cross-country center, we turned left onto the Luce Trail to make our way to the Trapp Bakery/Brewery. The Skimeister had taken the sit-ski out on the Stowe Recreation Path and he would rendezvous with us over a beer. The sun was getting lower and the view toward the Worcester Range was great. It was a spectacular day to be outdoors in Vermont!