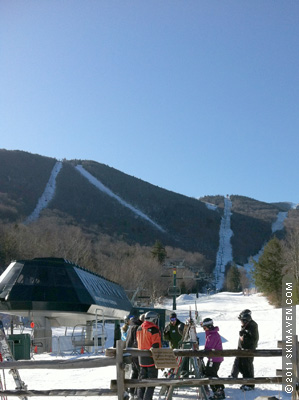 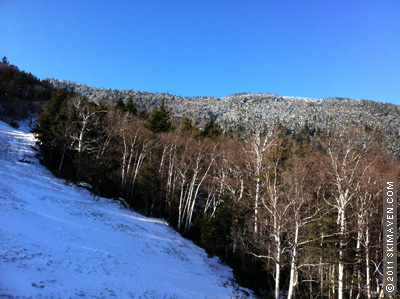 And it was a beauty of a blue-sky day! 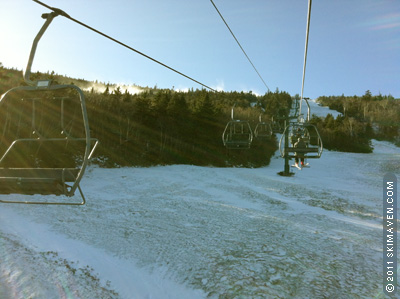 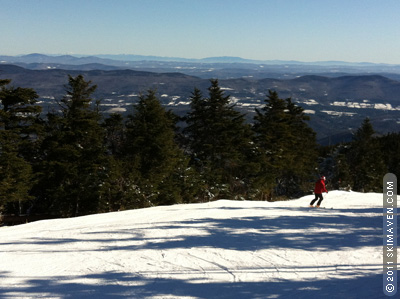 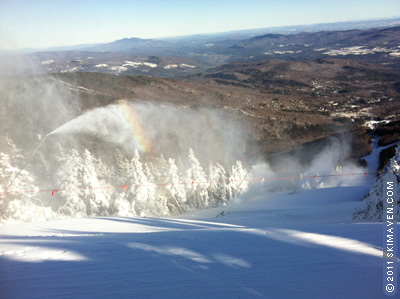 I knew the forecast called for a gloriously sunny Monday, so I rearranged my work schedule to get some runs in this morning instead of over the busy weekend. And I was rewarded with an uncrowded early-season ski morning at Sugarbush!

Skiers and riders were skiing the top of the mountain when I arrived. Jester and Downspout were open so I did laps on them via the Heaven's Gate chair, which goes to the top of the 3975-foot-high Lincoln Peak. Later in the morning the resort opened Lower Downspout to Gondolier so that people could ski to return to the base from the Heaven's Gate chair area rather than downloading to the bottom on the Super Bravo chair.

The sky was a perfect blue and the views were great. To the east I could see Mount Washington in the distance, as well as Lake Champlain to the west. The snowmaking crew was blowing full-blast on Organgrinder during the entire morning. I bet we'll see that steep, never-ending run open sometime soon. Sugarbush's snow report said they had been making snow nearly non-stop since Wednesday night.

But today I would get to know the Jester trial — Sugarbush's original ski trail. It whips back and forth as you descent from Lincoln Peak. With so few people on the trail, I gradually increased my speed with every run. It was great fun to zoom around the sharp corners and really let the sidecut of my ski take me around the curves!

The snow was mostly granular, with some areas of manmade packed powder when you were near any snowmaking guns. On one curve on Jester, the sun actually softened the snow to be rather corn-like.

Downspout was another story. This shady run didn't have a chance to soften up and it provided challenging hard-packed, eastern moguls. It was quite a wake-up call for me as the first run of the day! Hello feet — time to get movin'! Thankfully my skis were freshly sharpened. No wipeout today!

We're all anxious for Mother Nature to get this ski season going. Believe me, I was looking longingly from the chairlift at trails like Ripcord and Paradise, which had a sprinkle of snow on them. I remembered an amazing powder day that I spent on the Heaven's Gate trails just a couple of years ago.

Patience is a virtue, right?!?