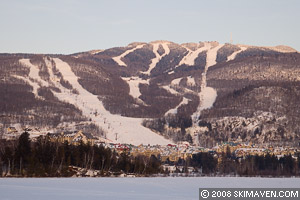 I traveled to the Great White North this weekend to have some winter fun at Mont Tremblant, Québec.

Saturday dawned with clear, blue skies so we braved the cold and headed to the mountain early to catch the best snow conditions and sunshine. I could tell the Mont Tremblant crew had been busy grooming and making snow that night. The first runs of the day were terrific.

Tremblant is a multisided ski mountain—including the Versant Nord, Versant Sud, Versant Soleil and The Edge. We followed the sun a bit in the morning. It was a cold day, so it felt great on your back. But after an early lunch break we headed down the Versant Nord and got stuck in a 20-minute lift line. Quelle bummer! We soon headed for the TGV lift (a cute name for a speedy quad), which had no lift line, and we did some fun laps there from the summit to the mid-mountain.

By midday, the trails started getting scraped off by the Saturday crowds. So by mid-afternoon, the Skimeister, his mom and I went searching for a café au lait in the pedestrian village. We found a cozy café and watched kids slide down a long ice shute that the resort constructed in a courtyard area. Fun!

Located about three an a half hours north of Burlington, Vermont, Mt. Tremblant is a place where many Montréalers go to recreate. Intrawest Resorts has poured millions of dollars into the resort to create a large ski mountain and a ski village that's colorful and cute—if not a bit Disney-esque. This is my second ski weekend here and I enjoy the French flavor and the view from the top of the 2,871-foot summit, complete with several lakes and the Laurentian mountains.

You get some long cruising runs with decent vertical at Tremblant, as well as a bunch of fast lifts. The ski area has a nice summit lodge with great views (and crepes, too) but it gets crowded at lunchtime in and outside the lodge. It makes it tough to ski across the summit area to a different "versant" because of the crush of people who are there on the weekend.

Many of the runs are conducive to fast carved turns, which is fun, but a bit scary when people are bombing it around you. Attention, s'il vous plait!

The natural snow trails and glades were either not open or in rough shape due to thin cover, so we stuck to the many trails they blast with snow. And really, I only came across two rocks to avoid all day.

We capped off a day of cruising with some skating on a large oval on Lac Moore, next to our timeshare condo. Locals and tourists alike get out on the lake to enjoy the cold, fresh air.

I'd love to ski here sometime with some fresh powder to enjoy in the glades. Even still, Mont Tremblant does a good job making snow so it's a fun place to carve it up with some French atmosphere.

Mont Tremblant at a glance