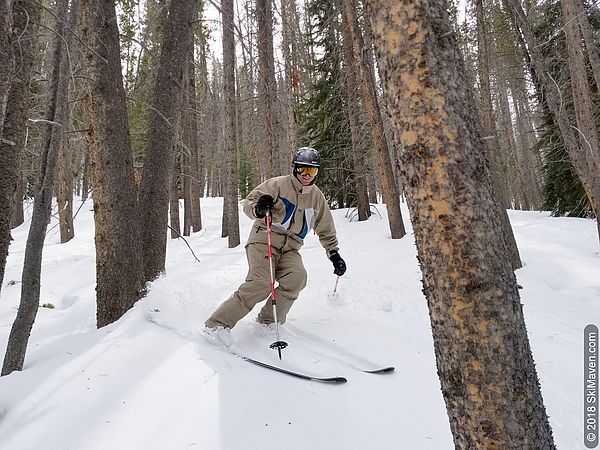 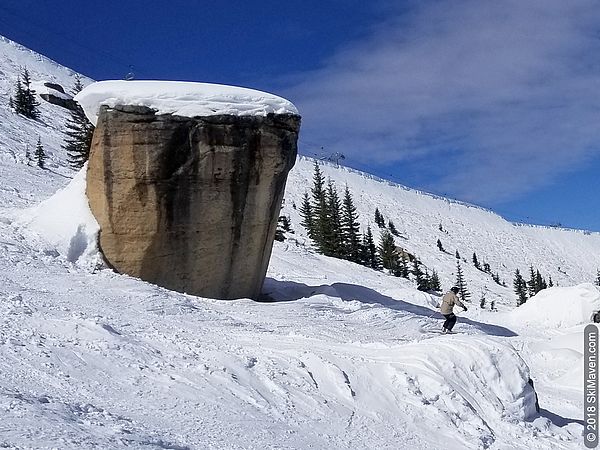 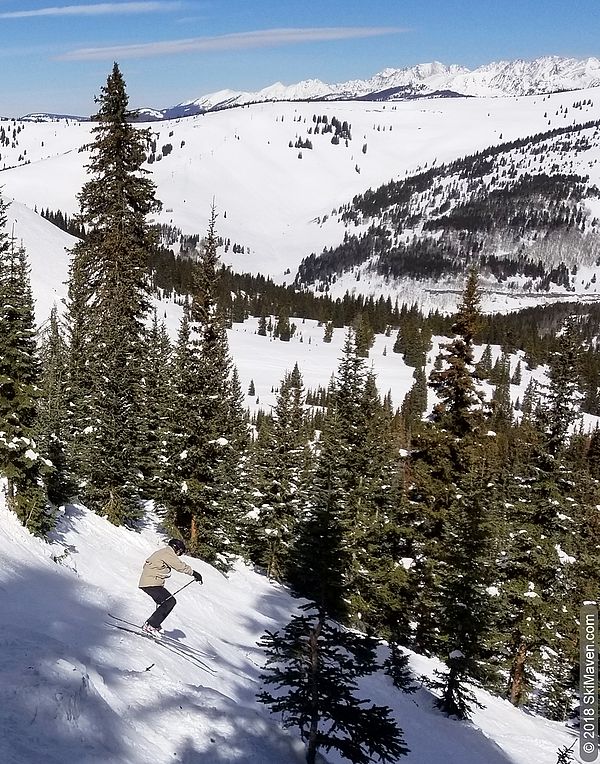 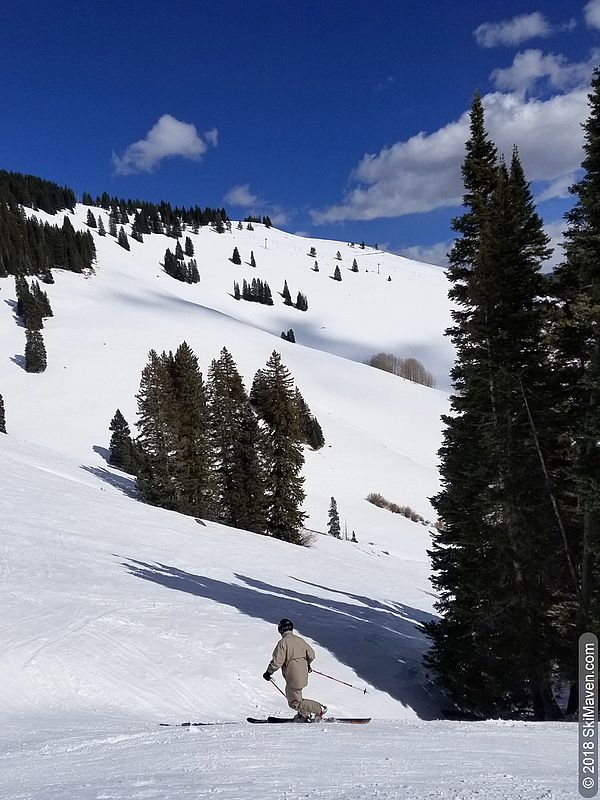 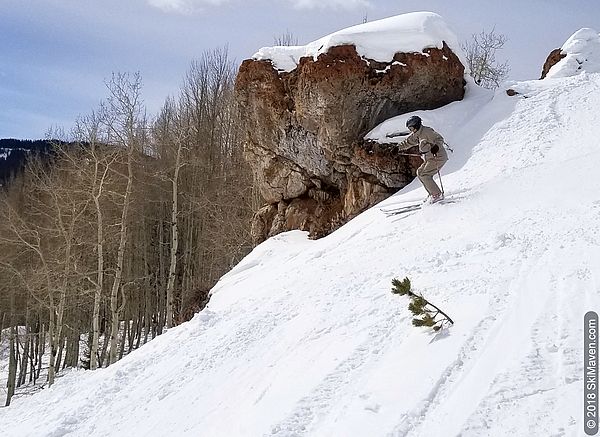 As luck would have it, we were in Colorado recently when the snowstorms started pounding the Northeast! We had planned a get-away to Eagle County and Summit County long before it became clear that Colorado was not having a good snow year. But you know, anytime you ski in the Rocky Mountains, it's special. There are plenty of treats to find even if it only snows just a little while you are there!

You may have seen our post about <link https: www.skimaven.com post skiing-five-fun-diverse-peaks-at-breckenridge-colorado internal link in current>skiing at Breckenridge. Now we'll tell you what we found at Vail, Colorado, in early/mid-March.

In the first days of our stay we could find corners of Vail that still had soft, old snow from previous snowfalls. We'd discover this on the steeper, north-facing slopes and the shady, woods. We spent quite a bit of time in Vail's Blue Sky Basin to enjoy these areas. The peaks in this area top out at about 11,500 feet.

The portion of Pete's Bowl that holds runs like Steep and Deep, Lover's Leap, Iron Mask and Little Ollie faces north so there were fun turns to be had here. Plus the trees in Champagne Glade and Montane Glade in Earl's Bowl protected their stashes of snow for fun, shady turns.

One morning, March 5, we were greeted with about five inches of new snow. The wind had been busy, too, rearranging the snow. We got powdery turns on Gandy Dancer and then in China Bowl, where there were some interesting drifts. But it was so very windy (making it cold, too) that we didn't venture much farther.

The next day we headed off to ski at <link https: www.skimaven.com post skiing-five-fun-diverse-peaks-at-breckenridge-colorado internal link in current>Breckenridge. When we returned to Vail, the snow was starting to get baked by the sun. We would start our days on the freshly groomed trails. They were as stiff as if they had been starched and ironed. Then, as the sun warmed things up, we could venture onto the ungroomed bowls and trails again. Little jump turns helped to get our skis out of the slightly crusty snow.

The bright sun and mountain views were spectacular. We had fun exploring all corners of Vail's Back Bowls, including the quiet Inner Mongolia Bowl (reached via a poma lift) and Siberia Bowl.

Skiing in the trees out west is a bit different. The aspens and evergreens are lovely. There are fewer bush and sapling branches to contend with, but you need to steer around the evergreen branches; these stiff branches don't just brush aside like our's do in Vermont!

Our favorite place to take a break on the mountain was at Blue Sky's Belle's Camp. It has picnic tables with an incredible 180-degree view of Mount of the Holy Cross and the Collegiate Peaks. Wow!

Toward the end of our stay, the sun kept shining and no new snow fell. It began to feel like spring skiing. Again we would start the day on groomed runs (things froze up overnight) and later move to ungroomed trails that had been softened by the warm temperatures and powerful high-mountain sunlight.

Some of our most-fun springlike turns were had on Rasputin's Revenge, Windows and Forever in the Back Bowls. We found super-soft-and-surfy snow in an untouched corner of Forever. But Forever soaks up the sun during the day and brown patches were growing. The snow would not last there forever.

On the front side of the resort, we enjoyed corn snow on Pickeroon and Lindsey's (yes, that Lindsey). We also skied a couple laps right under the Eagle Bahn Gondola as the snow was soft and almost no one else was on that trail! Our morning runs on the groomers had included quite a few other people doing skidded turns. (Got edges?) We got off of those busy slopes as soon as we could.

Vail was promoting how it was grooming more trails in the Back Bowls this season, saying that they wanted to be sure everyone who wanted to could enjoy skiing the bowls. Besides the mellow Poppyfields runs, they groomed steeper slopes such as The Slot, Campbell's, Red Zinger and Genghis Kahn. This worked out particularly well with the low-snow weather cycle we were in.

The warm Colorado sun was nice when it came to après ski. People sat outside in the late-afternoon sun in Vail Village. We found a cozy après spot in the Village called Alm Resi. With decor that reminded us of fancy mountain huts in Europe, we sipped on German beer and munched on big pretzels and bratwurst. Our servers hailed from Germany and Austria and German-speaking locals gathered to chat at the bar.

On another day we ate tasty burritos at La Cantina, also in Vail Village. It's in a funny location, tucked in a lower corner of the bus terminal and parking garage. But the food is satisfying and affordable.

Our days at Vail were not the “epic” snow days we had hoped for, but we had a great time thoroughly exploring the resort, soaking up the sun and enjoying challenging, scenic terrain.