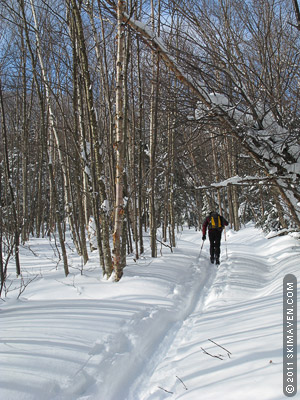 Sun made it feel warmer than 5 degrees. Sometimes. 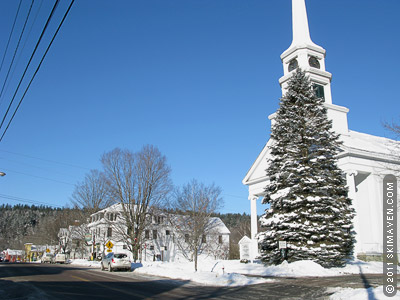 A sunny morning in Stowe Village. 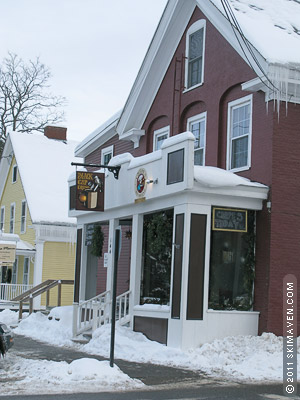 Stopped for a scone at Black Cap Coffeehouse. 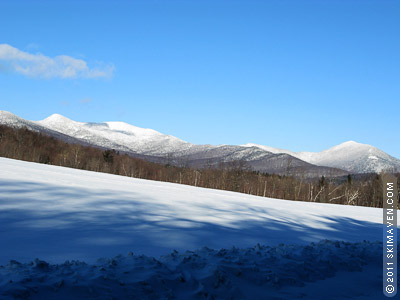 A distant view of the Sterling Range. 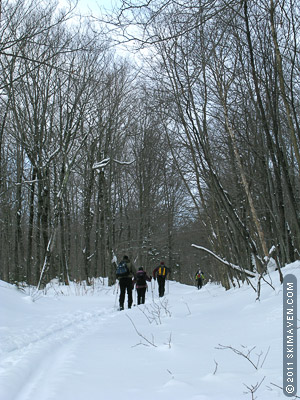 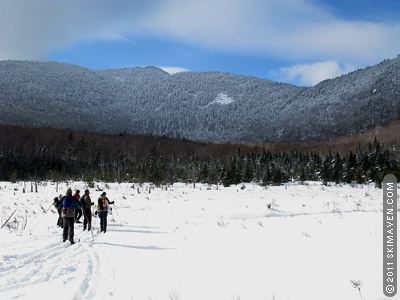 A glorious view at the wetlands! 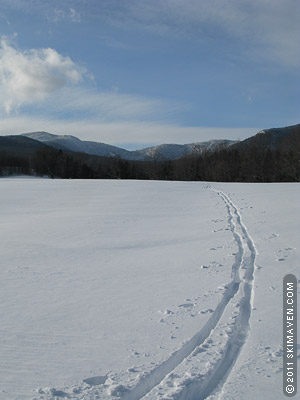 Another skier's tracks across the meadow.

Well if it's going to be 10 degrees, it's always nice to have the sun out! We were treated to sunshine and blue skies as a group of us skied up the Beaver Meadow Trail and down the Burling Trail in Morristown, Vermont — on the flanks of the Sterling Range, north of Stowe.

Because the Skimeister is recuperating from ACL reconstruction (yes, he messed up his knee while snowboarding), I've been seeking out friends and groups to ski with. Today I joined nice folks as part of a Catamount Trail Association day trip. In all, about 12 skiers set out from the Beaver Meadow trailhead.

Despite the frosty temperatures, I was down to a fleece while climbing the steady, rather mellow trail. It goes up some logging roads before entering the woods. Then we beared to the right when we saw signage for the Beaver Meadow Lodge (which is northeast of Madonna Mountain — as in Smuggs). This brought us out onto the beaver wetlands with wonderful views of the Madonna and Whiteface ridge. Gorgeous!

After enjoying the mountain vista, we skied across the frozen wetlands. Soon we were breaking for a snack at the unheated, primitave lodge. I was so happy to have made hot tea this morning and put it in a thermos for the trip. Ahhh.

It was time to move on to the Burling Trail, so off went some of the layers again and we climbed a bit and crossed many streams before contouring the side of the mountain. Then the fun part: we had downhills to enjoy!

The snow was rather deep but if you stayed in the skier-created track for a bit you'd pick up enough speed to then make some mellow telemark turns on the downhills. I had waxed the tips and tails of my skis last night so I was really gliding along and having a great time on the rather intermediate downhills. So much fun!

Then we got on a stretch of snowmobile trail, which happened to be a piece of the Catamount Trail, as well, to head back toward the parking lot. We had left two cars in this area for anyone who wanted to bail out in the meadow area. But, not knowing what lay ahead in the final mile an a half or so, we all kept skiing the snowmobile trail. It went up, and up, and up. After four miles or so of nice woods skiing, this was not a welcome last stretch. I would recommend doing the bailout across the meadow to Mud City Loop Road!

All in all a lovely day staying warm while backcountry skiing. I generated so much of my own heat that only the ends of my digits bothered me once during this single-digit kind of day!

Kudos to the Catamount Trail Association volunteers for getting people together to ski in the backcountry of Vermont!

FYI, to see a map that has these trails on it, buy the Mt. Mansfield Area Nordic Map that is sold on the Catamount Trail Association website, or in Stowe-area shops.