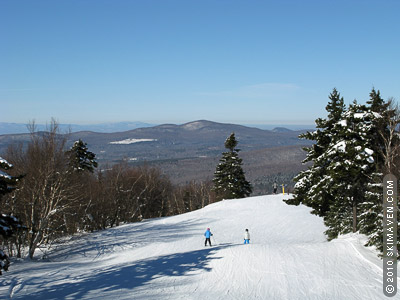 Middlebury Snow Bowl is perched high in the Green Mountains. 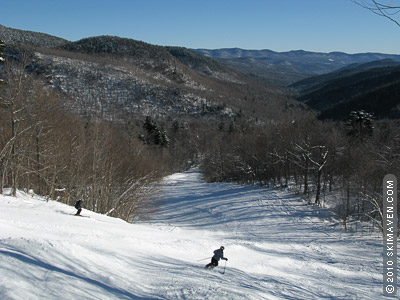 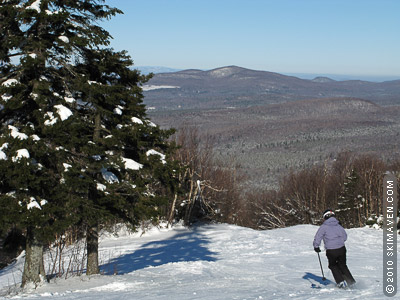 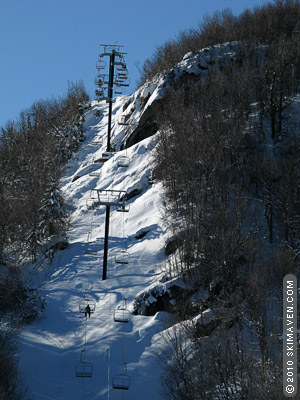 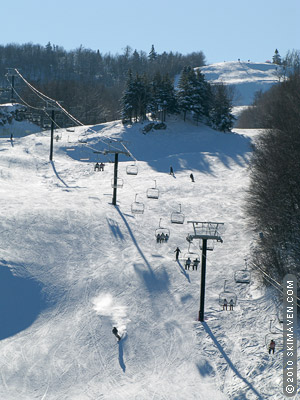 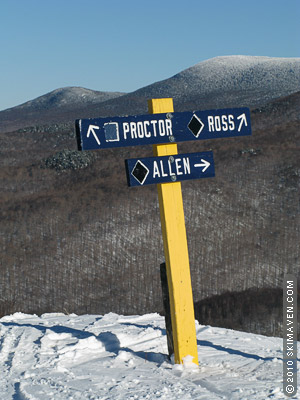 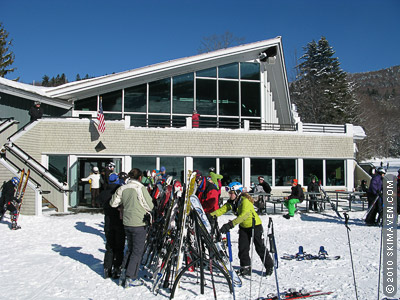 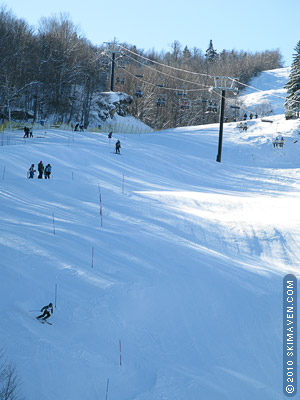 What a great weekend it was to be a skier in Vermont!

Knowing that this weekend was going to be sunny and warm with good driving conditions, I schemed up a plan to ski at two areas that were new to me: the Middlebury Snow Bowl and the Rikert Ski Touring Center.

Have you heard of the Middlebury Snow Bowl? I knew it was small and owned by the college, which has a strong skiing program, but other than that I was not sure what to expect.

Turns out it was a bunch of fun and wasn't even crowded on a sunny Saturday.

We enjoyed a scenic drive up route 125 from East Middlebury Saturday morning. This twisty road ascends along the Middlebury River. There was quite a bit of snow on the trees; it obviously doesn't get much sun in this ravine. We passed Middlebury's Breadloaf Campus – a collection of mustard-yellow buildings in a picturesque spot on the edge of the Green Mountain National Forest. Just a few miles further we entered the lot for the Snow Bowl.

The look of the place brought me back to a couple of the New Hampshire mountains I had skied as a kid. The kind of areas that have a small lodge, a handful of lifts and lots of families. But looking up I was also impressed at the steepness of the slopes that dropped from the 2,640-foot summit. This place had some pitch to it!

We put our boots on by the fire in the comfortable Starr Shelter – the base lodge complete with a sunny, slopeside deck. We were skiing on our new telemark gear; I was hoping to continue working out the kinks in my turns.

We first rode the new Worth Mountain Double Chair. This chair was just put in this fall to replace an aging chair that needed a lot of work done to it. We passed over the top of a collegiate slalom race course. The racers were punching the break-away gates as they made their turns.

The lift ride inluded views of the small Lake Pleiad that is pretty much at the center of the mountain, and terrific views of the frost-topped nearby mountains and the Adirondacks to the west. Our first runs were on Proctor, Upper Loop and Lower Loop. They offered some very nice powder on the sides of the trails. The conditions were great!

Later we moved over to the Bailey Falls Chair area of the mountain. We enjoyed the trails called Youngman and Meredith. In addition to some powder turns, I had fun working on my turns in the moguls that were forming here and there.

We saw signs for the Long Trail which traverses the ski area. This ski area is perched on the spine of the Green Mountains among the national forest and the Bread Loaf Wilderness. It's really a rather remote spot.

Later we skied down Voter and ended up at the ski area's third chairlift: the Sheehan Chair. I have to say that the couple of green trails I took seemed more like intermediate runs. I didn't take Wissler or Lang, so maybe those were the true beginner runs on the mountain.

Off of the Hadley trail we had fun playing in the open, mellow Kelton Glades. Pretty soon it was time for lunch on the sunny deck with disco music blaring from the speakers. We watched the end of the morning ski race from this prime vantage point.

I chose to take my after-lunch runs on Proctor and Lower Loop, which continued to provide fresh snow on their edges. The Skimeister enjoyed exploring the snowy Proctor Glades, which were pretty well untouched.

The bottom line was that I was pleasantly surprised by the Middlebury Snow Bowl. It's bigger than it looks on the trail map. It had a wide variety of terrain. We enjoyed pretty traditional New England turny ski trails and some steeps.

On a gorgeous Saturday we never once encountered a lift line! And this place is affordable too – both for the ski tickets ($44 on the weekend) and the food service.

Tomorrow I'll fill you in on our mid-afternoon cross-country skiing outing down the road at the <link post great-grooming-some-surprises-at-rikert-cross-country-center external-link-new-window about>Rikert nordic center. It rounded out a fantastic day in the Green Mountains.