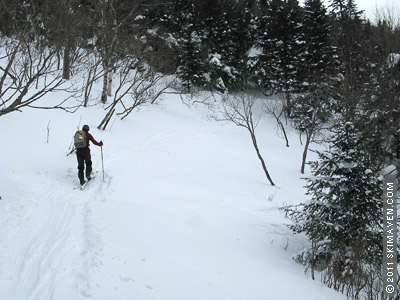 Our Cotton Brook backcountry ski tour had a little of everything. 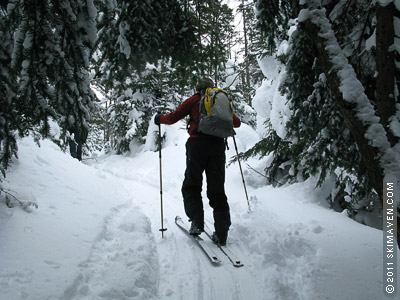 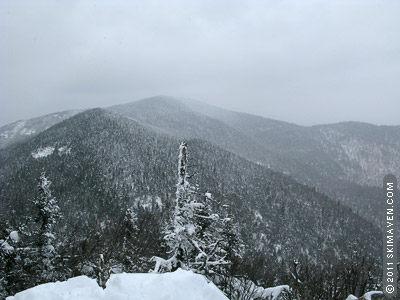 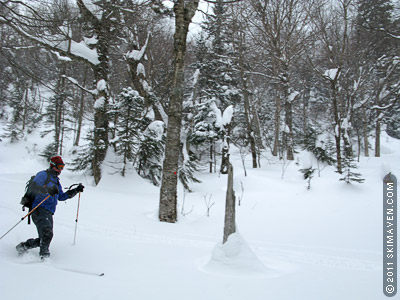 Nice powdery turns on the back side of Bolton. 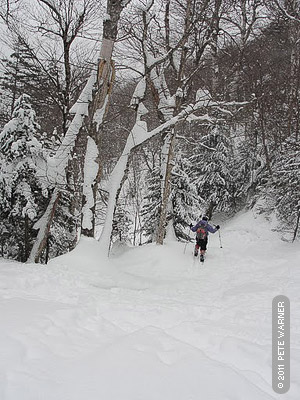 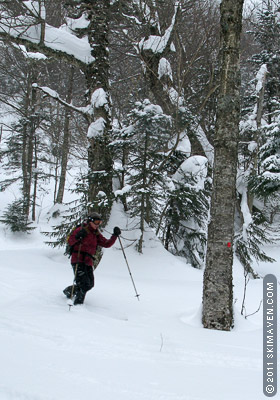 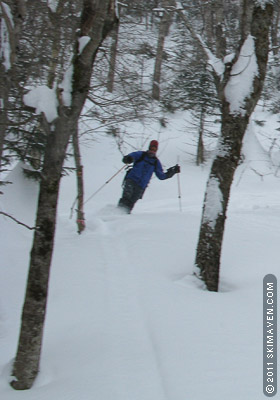 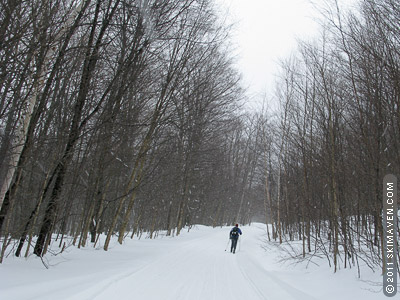 Quite a bit of snowmobile trail skiing. 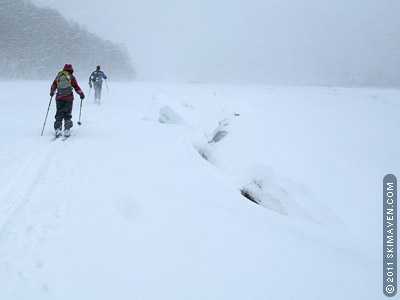 And we even skied next to ice chunks on Waterbury Reservoir.

On Saturday I joined two friends for our first exploration of the Cotton Brook backcountry trail in the in Bolton / Waterbury / Stowe area of Vermont. I believe we hit a bit of all three towns during our lengthy ski tour, and it offered a little of everything.

All three of us have skied the Bolton-Trapp Trail, and I think that trail is a much better choice for earning a sustained skiing descent. But we wanted to check out what was beyond those "To Cotton Brook" signs that tempt you at the highest points on Bolton Valley's backcountry ski trails.

We picked up our trail passes at Bolton Valley's nordic center and then climbed nearly an hour to the Stowe View lookout point. Here we de-skinned and I put on my helmet and goggles for the descent. (When I'm skiing downhill I like my helmet on my noggin. Plus, it's warm and comfortable; I often forget I have it on.)

The first downhill pitches turned back and forth through the trees and were great fun. As you might imagine, the snow is quite deep at this elevation above 2,500 feet, and I appreciated sinking into the snow because the slope was a bit steep. There were only one or two ski tracks seen on our route and they were days old.

We had to keep looking ahead for the best way to navigate some stream bed crossings. Toward the bottom of this first section, the trail grew less steep and I did some of my best telemark turns ever in this mellow stretch with wide tree spacing.

Then came the ski touring part of the trip and we kicked and glided while trying to follow the blue plastic markers on the trees. They were more visible on the downhill sides of the trees. Go figure. We were following blown-in ski tracks and we took turns breaking trail. It was pretty skiing through the hardwood forest and every once in a while we got a fun little downhill stretch where we didn't have to pole much.

Soon we hit a snowmobile trail, which is marked as the Cotton Brook Road on maps. This is where the ski tour becomes much less interesting as we followed snowmobile trails to head down toward Waterbury Reservoir. The snow coverage was good on these trails — even though the snowmobiles often left ridges in the snow on turns and downhills that made our skiing more challenging. We moved to the side of the trail for snowmobiles about eight times. Sometimes they were going really fast.

Here is where you pay your dues for the nice turns you had on the back side of Bolton. We climbed and contoured on the snowmobile trails, and had a fast-paced downhill before hitting a major intersection of snowmobile trails.

This is where we made our backcountry ski tour longer than we planned. We accidentally headed down toward Moscow (part of Stowe) instead of heading to the car we left near the Waterbury Dam. We had a huge, turny downhill run in this area, and I was so glad that I had my helmet on!

When we hit a big bridge at the bottom of this descent, we figured out we were on the Moscow side of the reservoir. We were near where Cotton Brook meets the reservoir. Have I mentioned there is no cross-trail to the dam side (Little River State Park side) of the reservoir at this low elevation?

C'est la vie. We accepted our mistake, called it an adventure, and headed for the reservoir where we called the Skimeister and tempted him with a beer and bratwurst at Trapps if he'd meet us at Trapp Hill Road. Then we had a snack on the shoreline and headed out on the edge of the reservoir toward Moscow.

Waterbury Reservoir had some huge sheets of thick ice jutting up here and there. It was very cool. The water must have frozen and then the reservoir must have been drained a bit to leave these 18-inch-thick ice chunks in their lopsided positions.

After a couple of snow squalls and some tiring slogging through the unbroken snow, we made it to the Cotton Brook canoe put-in area. We followed the unplowed road to the gate at Nebraska Valley Road and then walked a bit up Trapp Hill Road before the Skimeister met us. I was so glad to see his Subaru! I was whipped.

I happily changed into some dry layers at the Trapps Bakery and enjoyed a small Helles beer. It was a long ski tour, and I don't think I'll do the Cotton Brook trail again unless I only ski the fun part on top and then do the steep climb back up to the Bolton-Trapps trail. But there are many other trails to explore first!