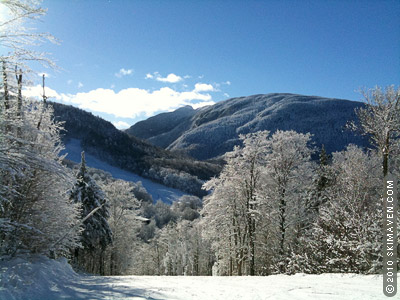 The views were gorgeous today under blue skies at Smugglers' Notch. 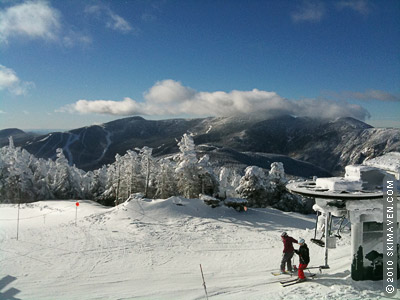 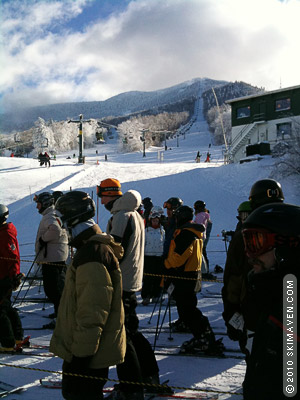 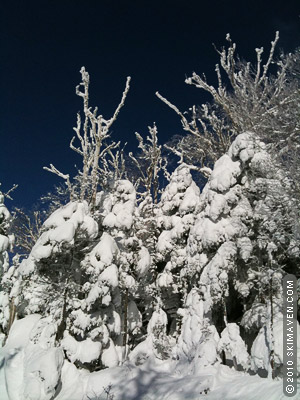 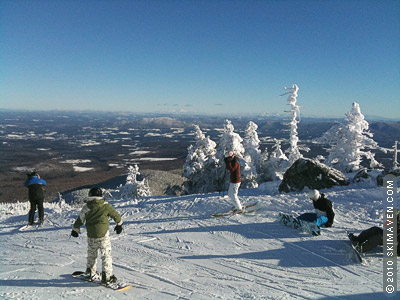 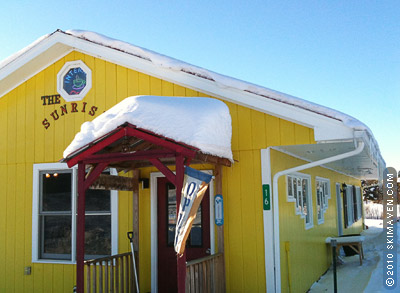 I feel rather guilty for having such a nice day on the slopes today, while some skiers at Sugarloaf, Maine, were part of a terrible lift accident. Our thoughts and prayers go out to those who were injured. (<link http: www.google.com hostednews ap article external-link-new-window>See this Associated Press article.)

But the sky was blue and the snow rather plentiful today at Smugglers' Notch in Vermont. They had reported up to 10 inches of new snow over the last couple of days, and it was fun to ski in, even if I wasn't getting first tracks.

My warm-up run (ha!) was to do Upper and Lower Doc Dempsey's. This was the first day for me to ski off the Madonna summit lift, so I wanted to hit some of my favorite trails right away. Doc's is always sketchy at the top, and today was no different. I was rewarded with more snow cover after I picked my way through the rocks and stumps at the top of the run. I played in the soft bumps on the sides of the trail.

I wanted to finish the run on Bermuda Glades, but I found a rope instead. (Heaven forbid that I should consult the trail report before hitting the lifts!) But I enjoyed finding powder on Northwest Passage. On a later run, I played in the nicely spaced trees on the skier's right of that trail.

Another fun run was skiing Upper FIS for the first time this season. There were giant snowmaking whales on the center of the trail, with glassy looking "linoleum" on their downhill sides. So I stayed to skier's left on the trail and had fun pounding mostly soft moguls. The wind was whipping on the lower half of the trail. Brrrr. I was glad I was wearing my thicker fleece layer and my sheepskin mittens.

It was so much fun skiing off the summit of Madonna Mountain, that I didn't even look at the Sterling lift today! The views were great today, too.

To wrap up a lovely day on the slopes, I stopped in at the Sunrise Café which is part of the way down the access road (Route 108). It's bright yellow, you can't miss it!

They make a good café au lait and yummy looking baked goods. I enjoyed a biscotti while taking in a wide view of the afternoon sun on Mt. Mansfield, Sterling Mountain and Madonna Mountain.