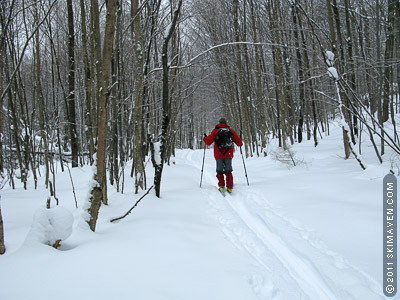 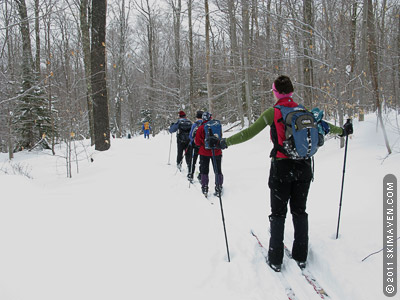 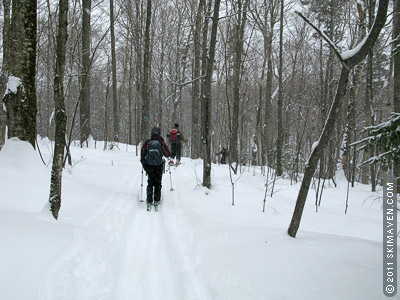 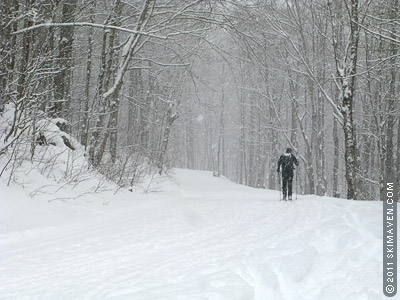 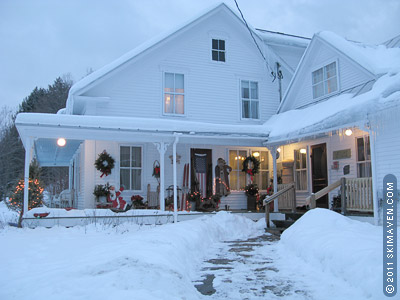 The sprawling farmhouse that is the Inn at Lareau Farm. 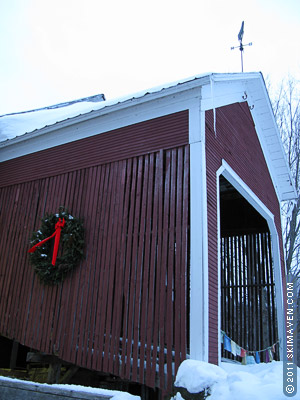 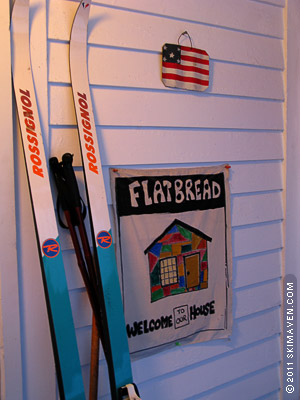 It's also close to Ole's and Blueberry Lake nordic centers. 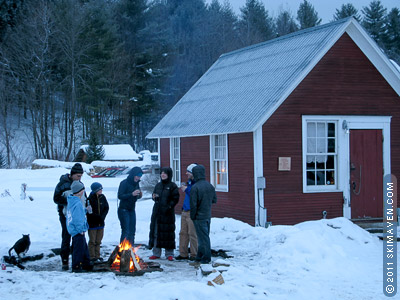 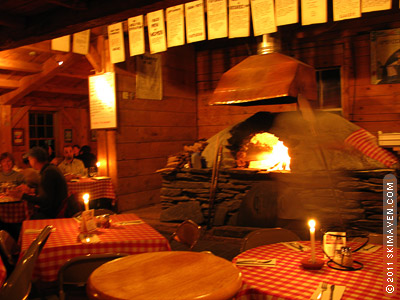 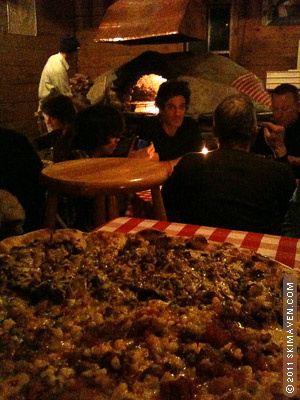 Flatbread baked in a woodfired oven. 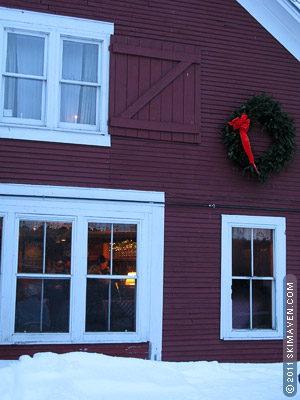 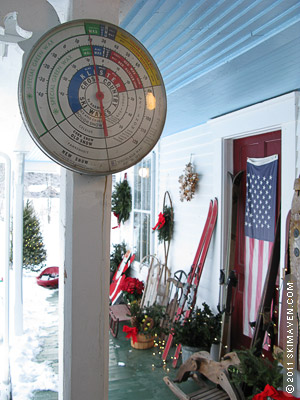 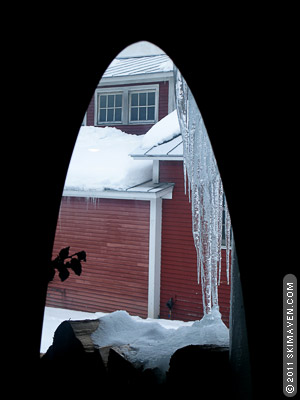 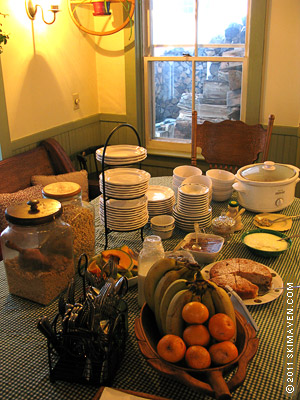 Breakfast time at the Inn at Lareau Farm. 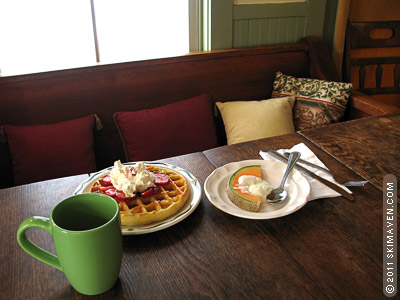 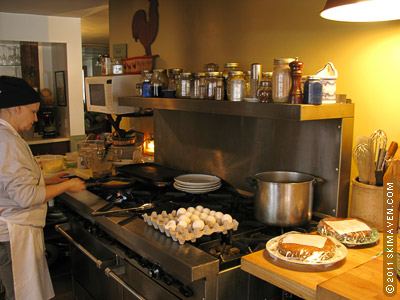 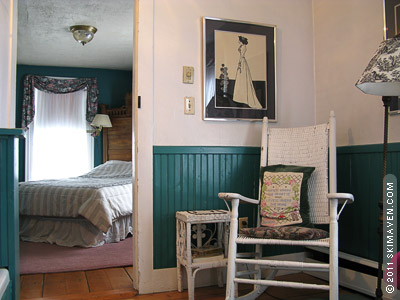 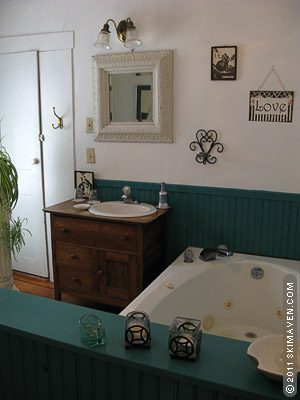 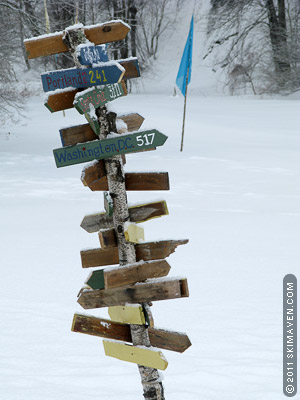 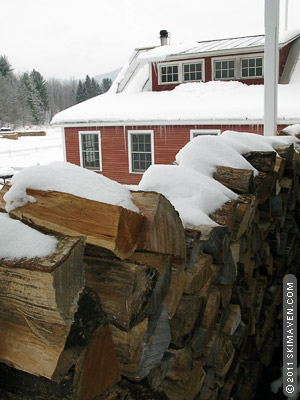 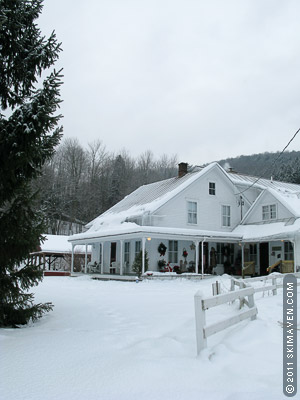 Light snow fell most of the weekend in Vermont's Mad River Valley and on the other side of the Green Mountains, where I was skiing section 17 of the Catamount Trail. As our group skied the 10-mile section of this backcountry trail on Saturday, the fluffy snow created a featherbed effect along the trail.

This section starts on the Natural Turnpike in Ripton, Vermont, and snakes its way to Lincoln Gap in Lincoln. We skied north, following the western edge of the Green Mountains. The group was organized by volunteers at the Catamount Trail Association.

The five-hour ski had a little of everything. We skied on snowmobile trails (crossing paths with about six machines along the way); crossed many small ski bridges; skied through hardwoods and then some evergreens; skied along snow-covered forest service roads; enjoyed a few fun descents, and one or two steep ones where I only had room to do an über-snowplow; tiptoed through rough and dirty logging areas; did a short road walk; and climbed gradually for nearly four miles to finish.

The snow conditions were great. There was plenty of snow so that if you got some speed you could do a few powder turns here and there, and you could also plow your skis into the snow if you caught up too quickly to the skier in front of you! At times the snow was really coming down and the oversized flakes were pelting my eyelashes during descents.

I did catch a ski binding problem early on, perhaps heading off a bad situation. I have three-pin bindings and they have three screws that attach them to the ski. After a lunch break, I noticed that a screw was loose on one ski. Luckily, I had my Swiss army knife and it had enough of a screwdriver to tighten up the binding. I did have to tighten it again later. Now I must look for a permanent fix!

Because the end of the long tour was climbing and more climbing, I would probably leave a car on one of the roads in South Lincoln to cut out some of it. It was neat to hit the Lincoln Gap Road, however, because we saw skiers and sledders of all ages heading up the unplowed road and enjoying the snowy ride down.

That was the finish line for our ski and I was glad to change out of my sweat-soaked socks and boots and throw on my down vest for the drive to my next destination: Waitsfield. I went up and over the App Gap on Route 17, which was slick due to the new snow. I even fishtailed a bit on one of the many downhill curves — yikes!

I met up with the Skimeister for dinner and an overnight stay at the Inn at Lareau Farm, which is just south of Route 17 in Waitsfield. I got to the inn at twilight, and the first thing I did was jump in a steaming hot bath in the big tub in our cozy room!

Lareau Farm is one of the Mad River Valley’s first farms, established in 1794 by Waitsfield's first doctor. The old farmhouse has a dozen guest rooms — all different sizes and decor. The innkeeper was thoughtful to give us a great first-floor room so the Skimeister didn't have to test his new ACL going up and down stairs.

Flipping through the guestbook I noted that people wrote about how comfortable and relaxing their stay was, and how it felt homey. I think part of the appeal to this farmhouse inn is all the common area that it has to offer. A front sitting room had games, well-worn couches for reading, and a computer. We sat by the woodstove in the second sitting room; I liked flipping through magazines on the old rocking chair. And a giant dining room was open at all times, providing lots of seating and table space.

In the afternoon, the adjacent kitchen offered trays of cookies and brownies and hot drinks, while in the morning two friendly cooks made Belgian waffles and omelets to order. You'll see that the Skimeister found plenty of photos to take around the inn!

Now for the kicker: the regionally famous American Flatbread restaurant is attached to the Inn at Lareau Farm by a breezeway! Around 6 p.m. we meandered over for dinner, and likely because we were inn guests we were ushered right over to a table.

If you haven't been here before, it's a really funky, bustling place. The restaurant is in an old barn with a woodfired oven and pizza preparation at center stage for all to see. We sat on metal folding chairs at red-and-white checkered tablecloth-covered tables in the glow of a tall tapered candle. The restaurant prides itself on using all-natural ingredients that are sourced locally.

The Skimeister and I started with a green salad and then dove into our half-and-half pizza: half "New Vermont Sausage" and half a special concoction of corn salsa, beans and cheddar. After skiing 10 miles I was so happy to see that flatbread! We washed it down with Vermont beers that were on tap. While the desserts looked amazing, I knew there were cookies waiting for us in the inn if we wanted a sweet bite after dinner.

Some more relaxing by the woodstove was followed by an early bedtime. What a great Vermont kind of day — skiing, a hot bath, flatbread, a cozy woodstove and a comfortable bed in an authentic, down-to-earth farmhouse inn.