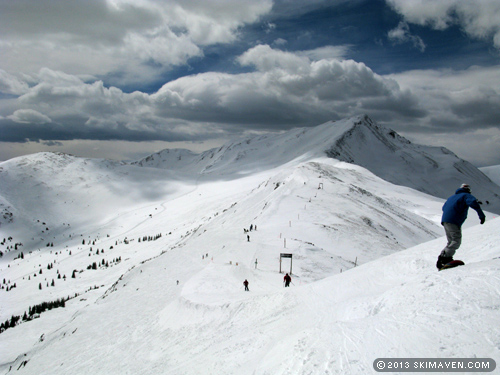 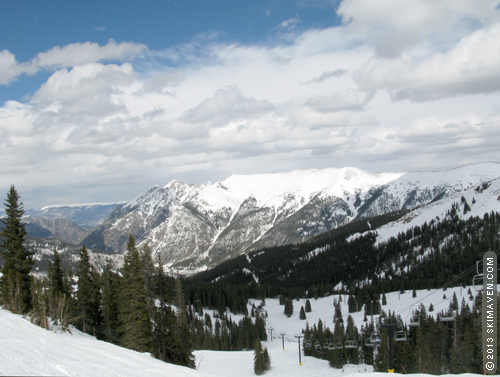 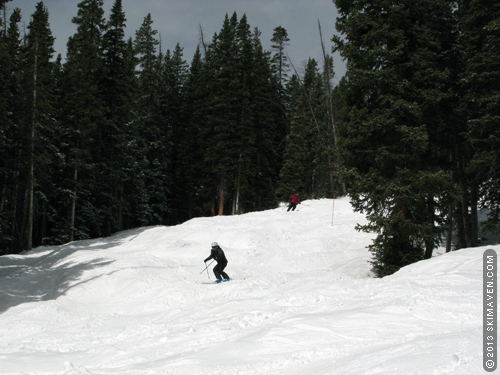 Bumps off the Resolution chair. 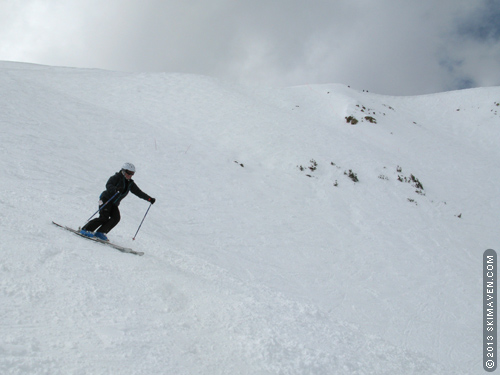 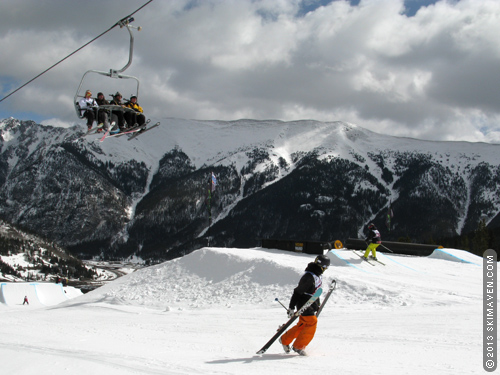 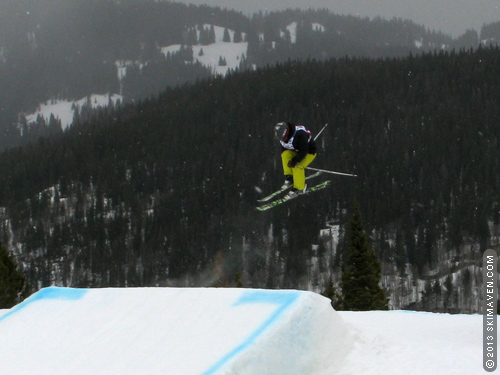 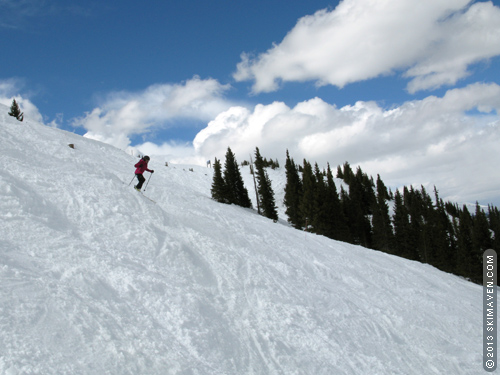 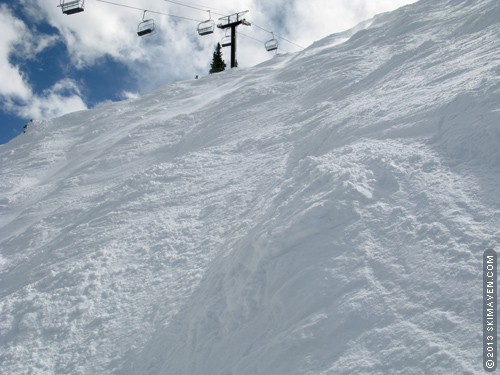 A steep pitch in Union Bowl. 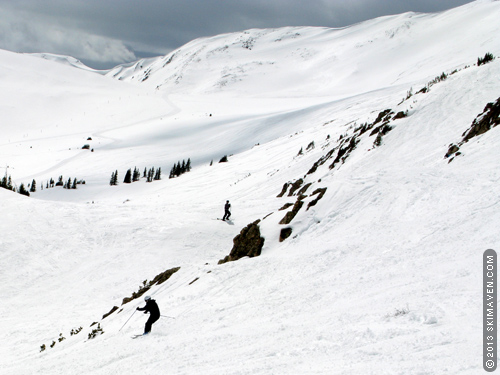 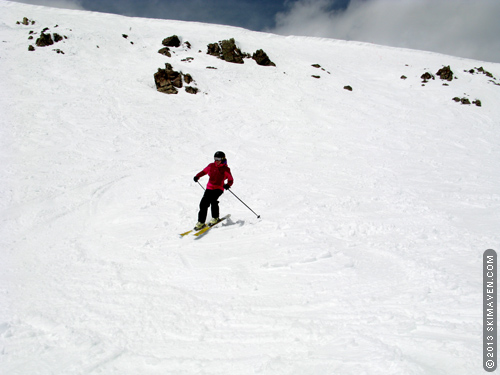 Fun spring skiing in the bowls!

SkiMaven took a field trip this weekend to Copper Mountain in Colorado's Summit County! I've skied there two days before – many years ago – and I recalled that I enjoyed this sizeable ski resort, but I needed to jog my memory as to exactly why I liked it.

I teamed up with a couple of friends to explore the ski area, which is conveniently set up to cluster many of its expert slopes on the eastern end and back bowls of the resort, while many intermediate runs are found in the center of the mountain and the beginner runs are gathered in the western side. We enjoyed the fact that the trails really didn't have long run-outs; we were often still on steep pitches as we approached the lift area at the bottom of our run. Gotta love that!

We were also quite pleased that this season provided a solid amount of snow to keep the coverage very strong for spring skiing. Last season, Colorado also suffered a less-than-stellar snow year and we were told there was a lot less terrain open at this time last year.

Some of my favorite steep runs included the open bowl terrain in Spaulding Bowl and Copper Bowl. These slopes had good pitch! It's fun to practice your jump turns from time to time, and it's cool when your turns dislodge some snow and it surrenders to the forces of gravity as it cascades down the hill a bit with you.

In Copper Bowl, Bradley's Plunge had a small cornice that we would drop into diagonally. After some steep turns, we came apon some rock features below that had ample space to ski between. We watched as some young skiers jumped off small rocks and natural snow features here.

In this area, you can also catch a snowcat to ski off the lift-less Tucker Mountain. We had plenty of terrain to explore, so we did not wait in line for this special service, but we did look with envy at some figure 8s that had been made on that side of the bowl in the days before.

Over on the broad Spaulding Bowl, we we rode the high-altitude Poma lift called Storm King to access a lightly bumped, open run. The steep Atlantic Cornice run dropped us into the Spaulding Glades, which were also fun, and this lead to spring bumps down to the Resolution chair.

Gladed runs in Colorado feature tall coniferous trees and some interesting-looking, gnarled snags (dead trees). The spacing is typically much wider than you'd find in Vermont, and the tree wells are typically wider and deeper, too.

Copper's smaller Union Bowl featured steep runs sprinkled with treed areas. Serviced by the Sierra lift, we enjoyed the bumps on Revenge and Endeavor. At nearly 12,000 feet, these mogul runs could really get your heart pumping!

One of the few things that bug me with western resorts is that they sometimes have chairlifts without safety bars. I have a bit of a problem with exposure, so it wigs me out (despite riding ski lifts my whole life!). But some of my favorite challenging runs at Copper Mountain were off these chairs so I came up with strategies to get through the ride (counting my deep breaths while looking into the distance, looking directly at my skiing buddies as they chatted and tried to distract me, trying to name bird species that start with the letter “s,” that kind of thing...).

As is true at many Colorado resorts, there are plenty of wide intermediate trails to enjoy at Copper Mountain. If they had been groomed we enjoyed doing fast giant-slalom turns down them. If they had bumps, we had plenty of lines to choose from. After doing some expert trails, it was nice to head to the blue slopes to air things out.

We enjoyed sunny lunch breaks on outdoor picnic tables at mid-mountain T-Rex Grill and Solitude Station. We packed our pockets and packs with salami, crackers, nuts and such to sustain our energy and carried Camelback-type water packs to keep hydrated. As you've probably heard, you must drink a lot of water when you recreate at Rocky Mountain elevations. You just have to do it or you will have bad headaches -- or worse. You really do need to take it easy on the caffeine and alcohol, and drink as much water as you can bear.

In addition to sun and warm spring temps, another treat during this time of the season at Copper is the USASA national snowboard and freeski championships. Two Vermont groups of young skiers represented the Green Mountain State (north and south) and we knew a young teen who was competing in skiercross, slopestyle and superpipe. I had never seen such large snow features before! It was impressive to see these young kids launching and spinning and flipping.

Also at Copper Mountain, we cruised on the official early-season U.S. Ski Team Speed Center at Copper. It is found on Andy's Encore and Rosi's Run. Zoom-zoom!

I came away with a greater appreciation for Copper Mountain than I did before because I had nearly two and one-half days to explore this great resort with my ski buddies. At less than two hours from Denver airport (drive west on Interstate 70 and get off at the Copper Mountain exit), it's worth checking out if you venture to Colorado ski country.

Stay tuned for more Colorado skiing adventures ... coming soon to a blog near you!

Copper Mountain at a Glance