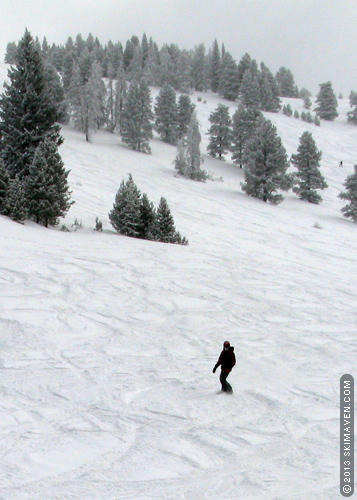 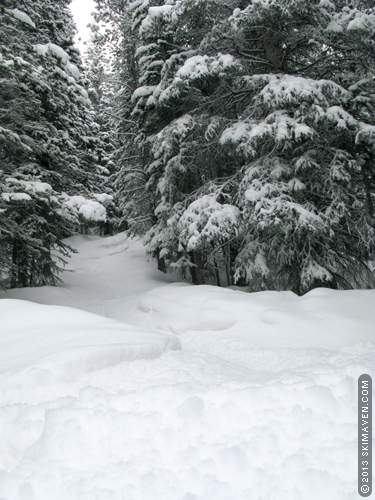 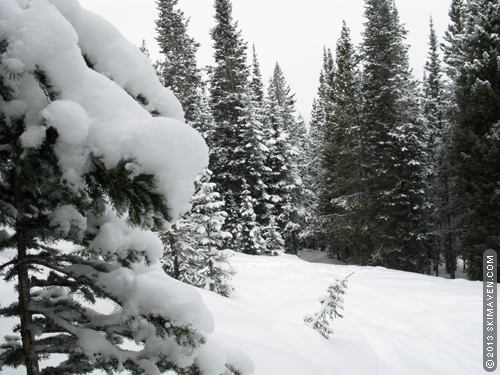 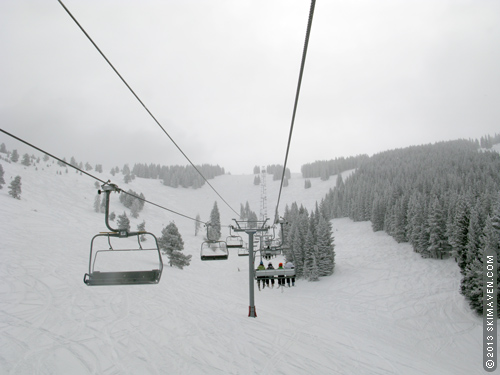 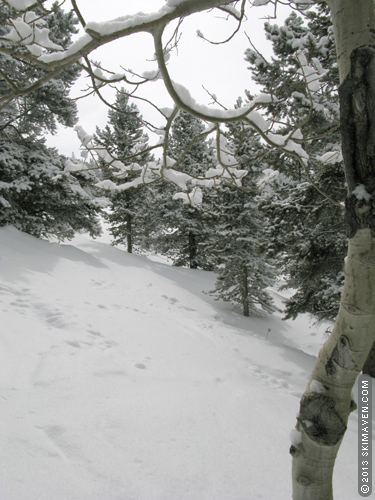 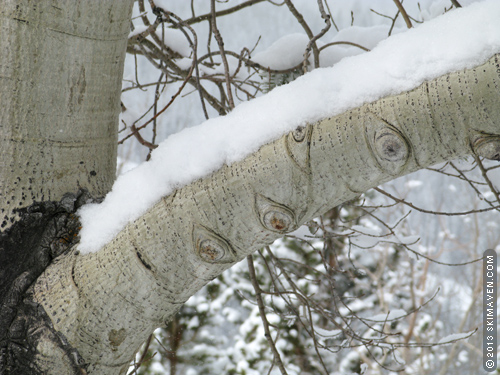 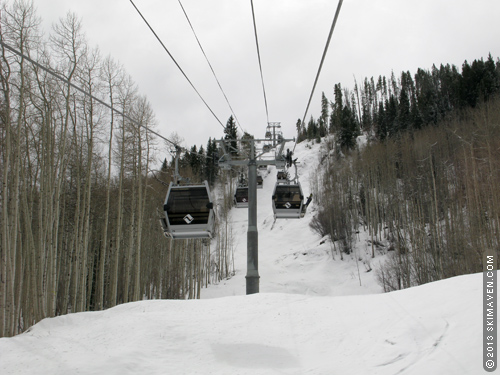 The new gondola from Vail Village called "One." 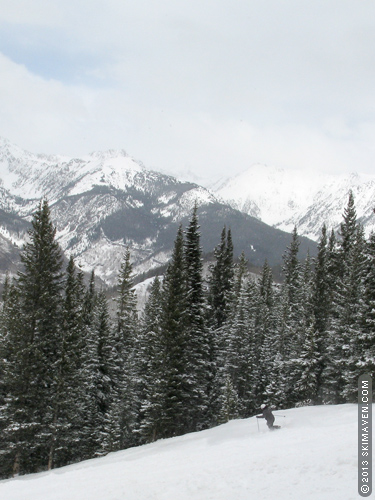 Skiing down Riva Ridge with Gore Range in view. 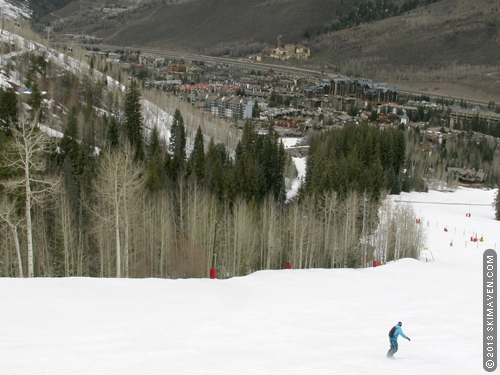 Closing in on Vail Village via Riva Catwalk. 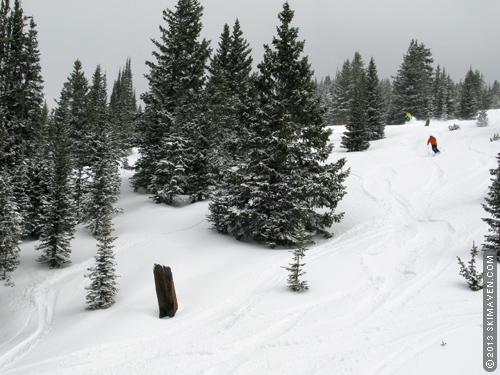 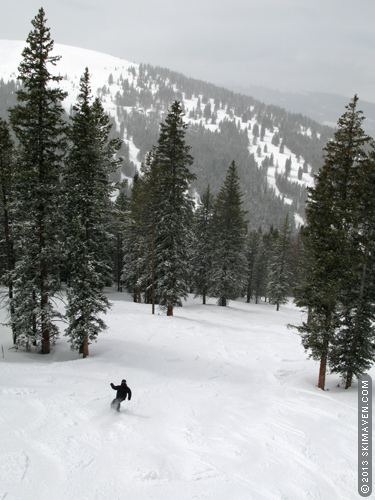 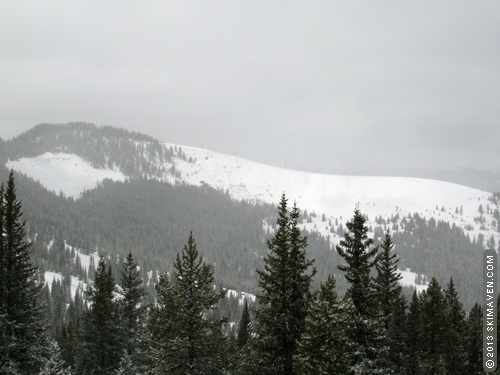 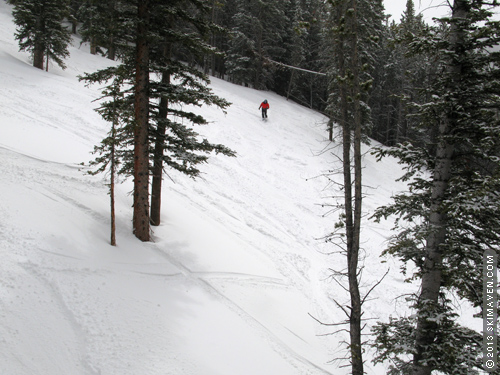 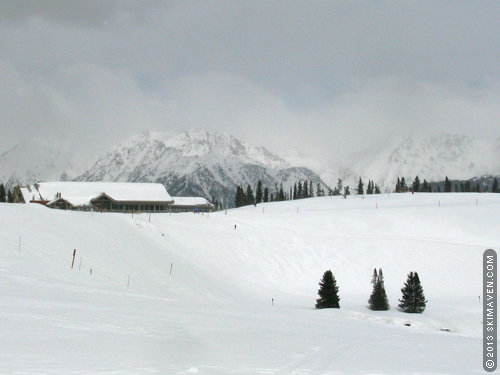 A view of the Gore Range and Two Elk Lodge. 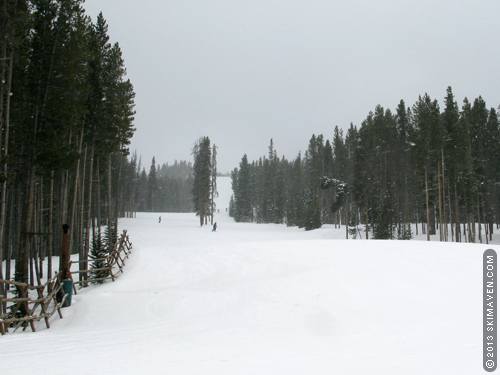 One of Vail's mellow intermediate cruisers near the Avanti lift.

This week SkiMaven continued a Colorado skiing adventure by heading to Vail Resort and Beaver Creek Resort. (I think I've mentioned that I'm spoiled rotten, right!?!) Located on Interstate 70 about two hours west of Denver, these resorts are 10 miles apart and are operated by the same company. In this post, I'll recap my two days of skiing at the enormous Vail Resort—with fresh snow on both days!

On my first day at Vail we skied in about five inches of fresh snow! The forecast called for more, so when I headed out in my car on the snowy roads I decided to stop and hop on an Eagle County bus from the Beaver Creek/Avon area to Vail so I could leave the driving to someone else. I arrived at Vail Village, booted up and headed through the Back Bowls toward Blue Sky Basin, which is the newest, “way-back” bowl at Vail.

I skied down through one of the open Back Bowl runs and discovered that the skiing was challenging because of recent spring weather. The immense Back Bowls face south so they get soft quickly. It seems that it had gone through a number of melts and freezes because under the few inches of new wintry snow it was rather crunchy and unforgiving.

But the north-facing Blue Sky Basin was another story. The new snow was fresh and old snow was very pliable. I enjoyed wonderful powder runs here—in April!

I started on the Skyline Express Lift and drifted over to the trail called Cloud 9, which lived up to its name. I got in lots of mellow powdery turns among the evergreens. And on this midweek day, the slopes were sparsely populated. I think I've mentioned this before: Ski during the midweek if you can!

I then caught the Pete's Express Lift (it tops out at 11,570 feet—the highest lift at Vail) to explore the eastern half of Blue Sky Bowl. Pete's lift was catching less wind than Skyline, which runs along a ridge.

I enjoyed weaving through thin patches of trees on The Star and Grand Review. Boarders and skiers were tearing up the powder. I met folks from western Canada who were also having a great start to their day.

I zipped over to Skyline again to grab some water at Belle's Camp—a rustic outpost at the top of the lift. I munched a bit on a peanut butter sandwich and some chocolate before hitting the powder and bumps on the expert runs Little Ollie and Heavy Metal. When the well-developed bumps got to be too much, I'd duck into the edge of the woods and enjoy less-bumpy, snowy turns. Then, back onto the trail I would go.

It takes a while to get over to the Blue Sky Basin but today it was well worth the effort. If the shorter Earl's Express lift were open I would have taken a run or two there (on the western edges of the basin), as well. Next time!

I jumped on the Tea Cup Express to get back to the Back Bowls and find my way to China Bowl. I just had to try out one run here for old time's sake. I haven't skied at Vail for about five years or so but for two winters I called this resort town my home.

I skied down the Poppyfields West area because they had groomed a swath of it. I could venture into the challenging ungroomed snow, and swing back onto the groomed. China Bowl is broad and it surrounds you as the lift climbs upwards. At the top is an impressive mountaintop lodge called Two Elk, which boasts large windows that afford mountain views of the Gore Range. It's a lovely part of the ski area.

Did you know that in 1879 a severe drought led to forest fires in this area, clearing many trees from what would become Vail's famous Back Bowls?

After China Bowl, it was time to hit the north-facing Front Side of Vail, where the snow was still quite fluffy. It was getting later in the day and I was planning to end at my starting point in Vail Village. You can also start your day at Golden Peak or Lionshead Village base areas; all are connected by free town buses. I cruised down the easy-going green trails Tin Pants and Flap Jack. I zipped past the newish Sourdough Express Lift, which used to be a slow lift. It serves beginner runs.

I was noticing recent resort improvements throughout the day. I saw the new High Noon Express Lift (installed in 2010), which used to be a triple that brought people back to the summit from two of the Back Bowls. I remember the lift line could be nasty before this new high-speed lift! I had also started my day on the brand-new, 10-passenger gondola out of Vail Village. With heated seats and WiFi, it opened this season and replaced a high-speed Vista Bahn quad. I'll miss saying “Vista Bahn;” the new lift is simply called One. Also new this year is a full-service restaurant called The 10th. It's located at Mid-Vail and the name pays homage to the 10th Mountain Division skier-soldiers who were trained down the highway from Vail at Camp Hale. Yes, Vail caters to all kinds of skiers – from the leisurely to the hard-core.

The solitude of late-season, midweek skiing really hit me in the afternoon when I decided to take the lengthy Riva Ridge trail down toward Vail Village. I stopped once and looked up and down the trail, only to see NO ONE. Pretty cool. As I finished up my day on the Riva Catwalk, I felt bad for the ski patroller who was there to keep people from speeding. He looked a bit lonely.

Soon I was in my sneakers and walking through Vail Village to grab a hot slice of cheese pizza at Pazzo's and then a yummy cafe au lait at Yeti's in the new Solaris building. My first Vail ski day in at least five years was a success!

On Wednesday, despite about four inches of new snow in the mountains, the roads were clear so I drove to West Vail and parked for free on the Frontage Road. I jumped the free town bus to Vail Village. (Parking in the parking structures is an arm and a leg for the day. Try to take a bus!) I decided to take the One gondola up to Mid-Vail and then explore Game Creek Bowl, which faces west.

I made an excellent decision! I had terrific powder runs here and helped some other skiers and riders slowly cover the slopes with long ribbons of S turns. Mid-winter temperatures had made for light, fluffy powder.

I remembered skiing in the trees here years ago, so while skiing the Wildcard and The Woods trails, I would pop into the trees a bit to eat up some deeper powder. Yum.

I later skied Ouzo Glades trail, but found it challenging in many places where the snow had been exposed to the intensity of the recent springtime sun. This is one of the slopes that faces more south than others. I met a nice young woman from Puerto Rico on the Game Creek Express Lift (which tops out at 10,981 feet) and was jealous when she told me she had spent the season in Vail and hoped to spend next winter working in Jackson Hole. Not too shabby.

I finished up my fun in Game Creek on the easier Lost Boy and Dealer's Choice trails, which had been groomed during the night. I let my skis run quickly through the powdery blanket that topped the smooth slopes.

At Vail, you can do a lot of traversing and catwalk skiing because the resort is so expansive. It's a good idea to target a couple of areas to ski so you get the most vertical during the day. After tracking up Game Creek Bowl, I decided to stay on the western part of the Front Side of the mountain.

I skied down Eagle's Nest Ridge to the large Eagle's Nest mountaintop lodge and gondola terminal (the gondola comes up from Lionshead Village). I had a water break and then enjoyed some trails below Eagle's Nest in an area where one of the lifts was closed. At one point on the Simba trail, which is Vail's western-most trail, I stopped, listened and looked. I felt that solitude feeling again—almost like those Ames' Three-Day Sale commercials that used the run on TV, where people would look around at an empty town and wonder where everyone went! How often can you get that kind of feeling at the nation's largest ski resort?!?

Simba, Bwana and Safari are some of the trails off the Pride Express Lift, which was closed for the season, and they are fun intermediate cruisers with a couple of black-diamond pitches to explore if you want. Now in early April, the lower portions of these runs were melting out as they dropped down to the level of the Eagle Bahn Gondola in Lionshead.

On a gondola ride back up, I met a nice couple who had recently hiked in Vermont. (I love it when people are friendly on lifts!) I zipped over to the Lodgepole trail where again I played a bit in the trees when the mood struck. I took the Avanti high-speed quad up to the top (have I mentioned that Vail has 16 high-speed quads?) and enjoyed a short, challenging expert run called Challenge. It started with widely spaced clumps of trees and led to a steep bump run. Appropriate name, eh?

I was in search of a water and snack break, but Wildwood Camp was closed so I took another powdery, bumpy run down Hunky Dory and weaved into the woods there from time to time to find deep, light snow. Was this really April?

Wildwood and Mountaintop Express lifts both ascend the mountain from Mid-Vail and I took the latter to have a nice break at Buffalo's Cafe. I actually bought some food here, on-mountain. They offered a good deal for $5.50 to have a bagel with egg and cheese on it. The 11,250-foot view was included! Outside of Buffalo's an old rescue dog paced back and forth and later napped in front of the door. Very cute.

As the afternoon continued, I took a couple more runs off the Mountaintop lift, including Cappuccino and its mellow woods and Ramshorn, which included some bumps. It was still quite easy to find powdery spots to turn in.

Vail is closing on April 14 and this recent winter weather is a great way to close out the resort's 50th season!

Vail Resort at a Glance