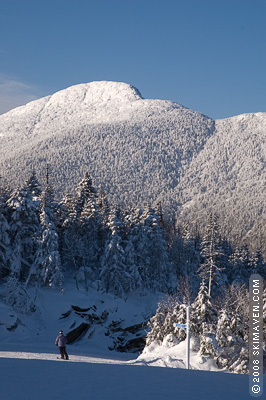 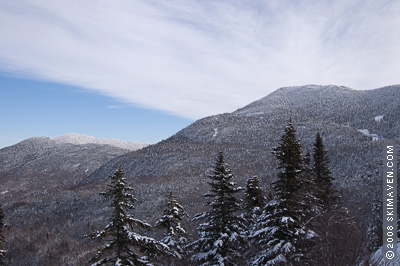 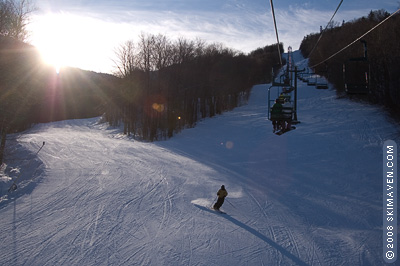 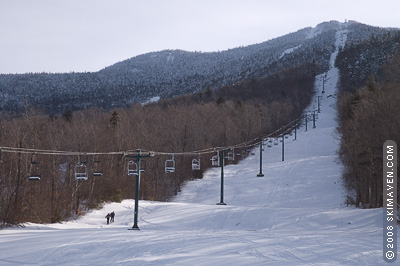 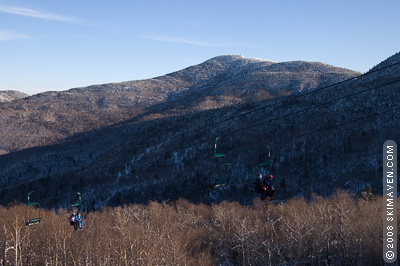 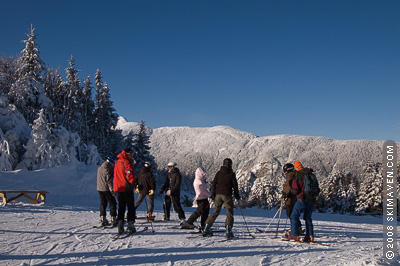 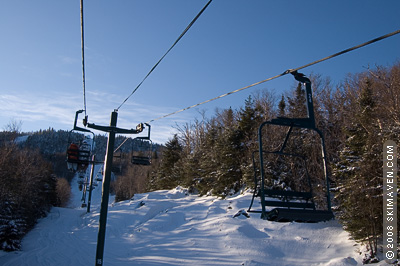 Phew! I just snuck in under the wire. I'm happy to report that I took my first turns for the season in November — just as I did last year — even if it was the very last day of the month.

The Skimeister and I headed up to Smugglers' Notch, Vermont, today to take some early season runs and we were not disappointed. There was plenty of snow on the few snowmaking trails that were open. Natural-snow trails even had some coverage, but rocks, grass and dirt was still showing here and there so skiing these trails was at your own risk.

About three inches of fluffy natural snow clung to the trees near the summit and softened the sides of the trails. The mountain tops were a frosty white and the icicles were growing thick on the rock ledges. At Smugglers' Notch you can get some great views of Mt. Mansfield and the dramatic Smugglers' Notch itself. This morning's bright sunshine made for very scenic skiing.

Smuggs is running the Sterling Mountain double lift (delivering you to 3,040 feet in elevation) so we did laps on Upper Rumrunner to Treasure Run to Lower Exhibition. We also did Thomke's from near the summit warming hut, but nearing Bootlegger I found some unavoidable rockage. A later look at the bases of my skis showed me there was little damage. Yay! The moral: If you want to go on the natural snow trails, know that you will hit some rocks and dirt.

We also skied the entire length of Rumrunner, which allows for some large-radius carving turns when there aren't other skiers around. Fun!

I often feel a tinge of nervousness during the first lift ride of the ski season, wondering if I'll remember how to turn left and right, but not today. For some reason I knew I was ready for my first turns. It must have been the snowy trees and the blue skies. It was a great way to start the season.

Let's hope that the "wintry mix" that is decending on northern Vermont right now will remain mostly snow at the ski resorts. I plan on skiing later this week, so I'll let you know what happens.