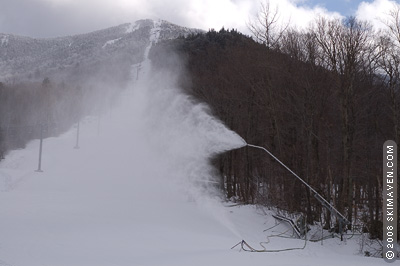 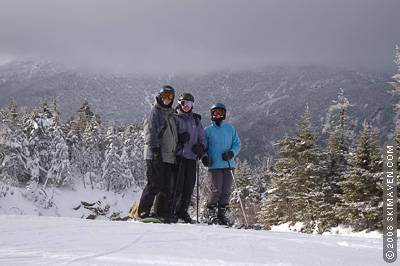 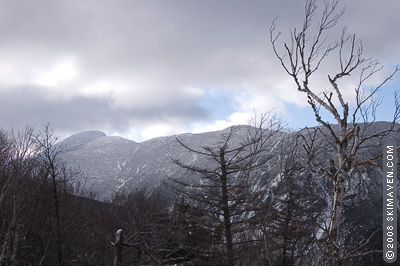 A view of Mt. Mansfield from Upper Rumrunner at Smugglers' Notch. 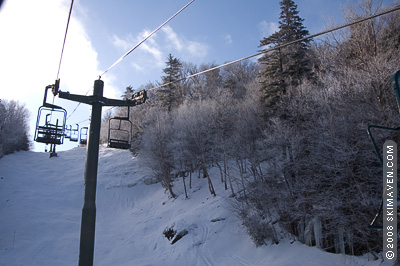 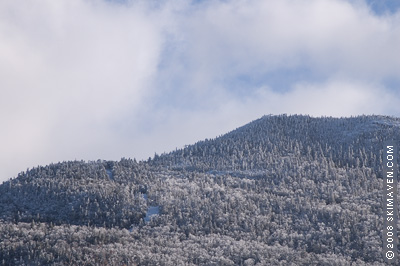 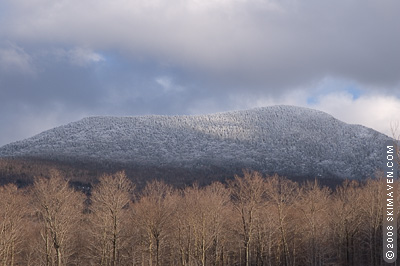 What a difference a day makes. Thursday's skiing reminded me of some of the spring skiing I enjoyed last season. After we waited out the morning rain (yes, rain!), we took to the Sterling lift at Smugglers' Notch. There we found soft snow that made you feel like a rock star!

Today, on the other hand, we were transported quickly back to December skiing. The temperatures had dropped overnight and we woke up to sunny skies. As we drove to Smugglers' Notch ski area you could see the snowmaking guns creating their own mini weather systems. Some flakes floated over the Sterling lift as we skied late morning and early afternoon.

The conditions had returned to what they normally are this time of year: frozen granular. So the speed was kicked up a notch, as well as the edging.

There still was no lift line today, so the Skimeister, Mother Skimeister and I zipped down the few trails that were open. The snowmaking runs had good cover—just a little scratched off here and there. Beginners and early intermediate skiers beware: there isn't terrain open for you yet.

Smugglers' Alley was all bumped up and it was pretty fun even though they were eastern bumps carved out of manmade snow. Thomke's Express was hard-packed and fast, but a fun challenge for your edging skills.

Upper and Lower Rumrunner allowed us to make fast cruising turns and the sunny day afforded us some great views of the other frosty peaks around us, including Mt. Mansfield.

We could see that Smuggs was making snow on Black Snake, Practice Slope and the base area of Sterling and Madonna. I also saw a snowmaking storm cloud over a trail on the skier's right of Madonna—not sure which run. I bet they'll open up another trail for the weekend.

That snowmaking is what we're banking on right now for good early season turns. Let's all pray for continued cold temperatures and a little help from Mother Nature.