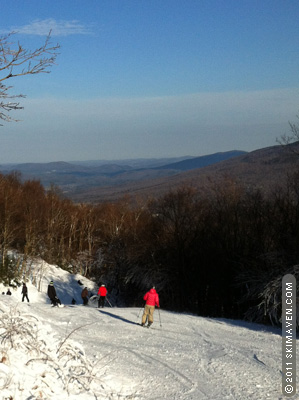 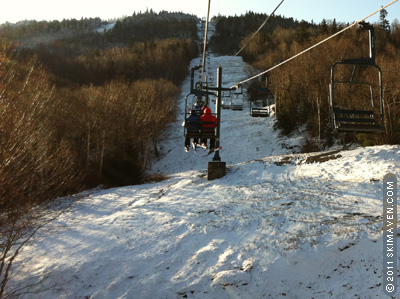 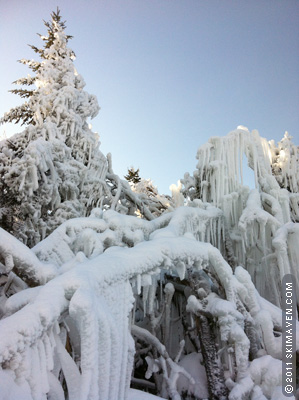 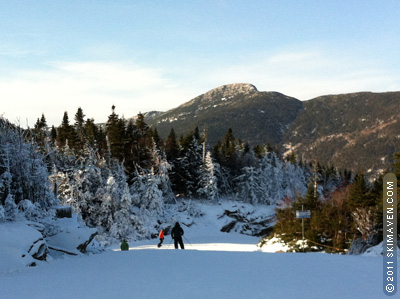 What a nice, sunny weekend. And it featured some first-of-the-season happenings today:

While it was a windy day, and lift holds were apparently an issue at Sugarbush, I was able to get some morning runs in at Smugglers’ Notch for the first time this ski season!

Smuggs opened its Sterling Lift and and essentially one long run today. I heard some hooting and hollering from a few people who were loading the lift for the first time. I agree: Woot-woot!

I was riding the lift as the sun peeked over the shoulder of Madonna Mountain and helped to brighten the mountain view. Ahhh... it was great to be up high in the mountains again!

The snowmaking created a patch of iced-over trees at the top of the lift. And the trail map was completed encrusted in ice.

The morning featured typical early-December conditions: fast, manmade snow that makes for what I call “noisy” skiing, but it felt so good to get out there and make turns! The terrain was suited for intermediates and advanced skiers, and I noticed some groups of young ski racers, including a group from Cochran’s.

I had been so excited yesterday as I pulled my gear out in preparation for my first outing. I remembered pretty much everything. The one exception was chapstick. It’s now in my ski jacket for the season!

After taking some runs today, I stopped in for a tasty cafe au lait at the Sunrise Cafe; it's on Route 108 half-way to Jeffersonville from the mountain. Then I stopped in at the Bryan Art Gallery in Jeff. It's bigger than I remember and I really enjoyed their current shows that included the themes of trees, wildlife, farms and villages. A nice place to stop if you are in town. I noticed they now have a little gift shop with artsy calendars and notecard collections.

So now that I’ve made my first turns, I'm even more ready for Mother Nature to turn the thermostat to “frigid.” Sounds like Vermont may endure a couple of non-snowmaking days before things chill off again. If you are thinking about skiing during the midweek, be sure to check the ski resort websites before you solidify your plans.