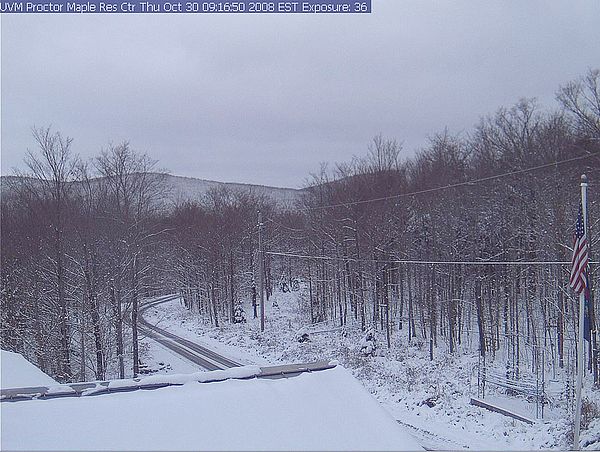 Is there snow in Vermont? Why, yes! The report from the tippy top of Mt. Mansfield is that there are 11 inches of snow at the stake—well above average for this time of year—due to the storm that came through this week.

Here's a Web cam shot from Underhill, Vermont, this morning. Underhill is on the western side of Mount Mansfield.

Here in the Champlain Valley we had about an inch or so, but much of that has melted to reveal the fallen leaves again. While there is still some more raking to do, we'll be hitting the slopes in no time.

In other news, some Vermont and Colorado ski resorts have banned their staff from using the two new controversial lines of snowboards from that big snowboarding company that starts with a B. Some resorts have said that they won't sell the board on their mountain either.

I have really not wanted to post about this topic because I didn't want to add to the free publicity that this snowboard company is getting. But now some ski areas are taking action so I felt this is a brief way to acknowledge the bad taste of this Vermont-based company.

They've also poorly handled the protests of groups and families who have come out publicly against these board graphics, saying that they demean women and glamorize self-mutilation. The CEO of the B company waited for weeks before issuing a statement that said that those who are offended by the graphics are a minority and not their target market. He said he will not consider pulling the boards from the market. I think he's forgotten that women and girls are a growth segment of the snowboarding market and moms have purchasing power for families who ski and ride.

Personally, I don't want to see these board graphics staring up at me while I'm riding the lift or waiting in the liftline. And I don't want my nieces and nephews to see them either. Let's hope that people who buy snowboards in the near future will choose wisely from the many other brands that exist out there. After all, this strong competition is the reason that the B company stooped to such a low to attract the attention of a narrow market segment with juvenile tastes.