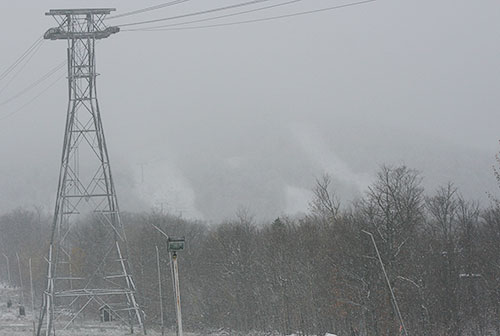 Ah, the little white flakes are making their first appearance here in the Champlain Valley of Vermont. It is just flurrying here, but the snow is sticking a bit in the higher elevations. Vermont mountains saw a bit of snow earlier this month, too.

The Burlington Free Press reports that some northern Vermont towns have accumulations of an inch or less. East Albany reported one inch of snow and North Underhill and Eden each reported 0.6 inches, according to the National Weather Service. 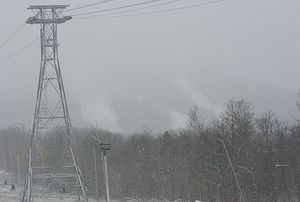 Vermont Route 108, which twists its way through Smugglers' Notch between Jeffersonville and Stowe, Vt., is closed until at least Friday because of snowfall. The road will be closed for the winter season beginning on November 1.

Here's a photo from this morning at Jay Peak ski resort. A tram tower is in the foreground.